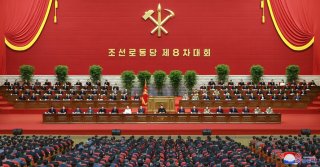 North Korea has yet to reveal any information regarding its planned plenary session of the Central Committee of the Workers’ Party of Korea, including whether or not the meeting has already taken place or if it has instead been canceled or postponed.

Following a politburo meeting of top party officials last week, North Korean state media reported that the decision had been made to convene the 3rd Plenary Meeting of the 8th Central Committee of the Workers’ Party of Korea sometime in early June.

During the meeting, North Korean leader Kim Jong-un discussed the results of the work carried out so far in accordance with decisions made during the country’s Eighth Party Congress held in January, and declared the need to call the plenary meeting in order to “solve pending problems urgent for the economic work and the people’s living.” North Korea faces “challenges and restrictions due to the prevailing unfavorable subjective and objective conditions and environment,” according to Kim.

It remains unclear precisely what the agenda for the meeting will be, with some suggesting that it may include discussion of the Biden administrations recently unveiled North Korea policy and the results of the recent summit meeting between U.S. president Joe Biden and South Korean President Moon Jae-in. North Korea has not yet officially responded to the rollout of the new policy.

It appears more likely, however, that the plenary meeting will focus more heavily on domestic challenges. The combination of the international sanctions regime levied against the DPRK, as well as the border closures and lockdowns related to the ongoing coronavirus pandemic, have significantly damaged the North Korean economy, leading Kim Jong-un to call on North Koreans to wage “another more difficult Arduous March,” referencing the deadly 1990s famine that plagued North Korea.

During a consultative meeting with politburo officials held in preparation for the upcoming plenary meeting, Kim reportedly briefed officials on “his plan to bring about a substantial change in the economic work of the state and the stabilization of the people’s living,” according to state media.

Food issues may also be on the agenda for the meeting, with a report by the Korea Development Institute suggesting that North Korea may face a food shortage of up to 1.35 million tons as a result of both pandemic-related border closures and damage to crop harvests as a result last summer’s typhoons and heavy rainfall. Many parts of North Korea have been hit by heavy rain this week, and state media has been warning about the possibility of another series of typhoons sometime later this summer.