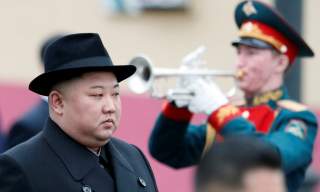 One of the many hopes raised by the recent détente efforts of South Korean president Moon Jae-in and President Donald Trump is the political confederation if not eventual unification of the two Koreas.

While full-blown unification is a pro forma goal of both Korean polities, many lesser steps and stages have been considered over the years. Frequently a confederation of some kind is mooted. This covering institution would follow China’s ostensible approach to Hong Kong and Taiwan—one country, two systems. In a “Greater Koryo Confederation,” the North and South would retain their own internal political systems but try to approach international affairs jointly as well as share resources. Over time, integration would increase, eventually leading to unity as suspicions between the two sides faded away.

This is very much the thinking of the South Korean Left, from which Moon has come. The South Korean Right still holds to the “Germany model”— North Korea collapses of its own dysfunctions and/or external pressure and is simply absorbed into a greater Republic of Korea.

But either model now faces a new wrinkle—the future disposition of North Korea’s nuclear weapons. It should be pretty clear at this point that North Korea will not give up many of its nuclear weapons or missiles. They may give up some, in exchange for large American counter-concessions, but complete, verifiable, irreversible disarmament is a fantasy. North Korea is a nuclear weapons state whether we want to accept that or not.

Hence if unification, or some softer confederal solution occurs, what would happen to North Korea’s nuclear weapons? In the West at least, there seems to be a vague, albeit widespread, sense that a unified Korea would not need such weapons, and that they would be destroyed or surrendered—variously to China, America, or some other third party. I hear this all the time on the conference circuit here in South Korea.

This is likely if the South Korean Right gets its way. The South Korean Right likes the U.S. alliance, worries about China (Chinese naval encroachments in the Yellow Sea are a major issue for the South Korean navy now), and wants better relations with Japan. In its favored scenario, North Korea implodes and is absorbed, much like East Germany, and the larger, but otherwise unchanged Republic of Korea, stays where it is geopolitically, just as the enlarged, post–unification Federal Republic of Germany (West) did.

For the Left here though, regional geopolitics is a much more mixed bag. North Korea is not, in this perspective, an enemy or opponent, but a fellow Korean state which has lost its way. The answer to inter-Korean tension is therefore not war threats, sanctions, and confrontation, but brotherly outreach and assistance. On Japan, the opposite is true; the South Korean Left is unremittingly hostile for historical and nationalist reasons. That Japan is a liberal democracy and North Korea an Orwellian monarchy are passing regime type concerns which do not cut to real, historical-cultural issues driving the South Korean Left’s alignment choices.

The Left here is also much more skeptical of the U.S.-Korea alliance. The last two liberal Left presidents before Moon openly tangled with the United States over North Korea in ways their conservative predecessors never had. Today the Left here largely blames the sanctions regime—demanded by the Americans—for halting inter-Korean détente. Anti-Americanism on the South Korean Left has been an occasionally political force. Finally, the Southern Left is far more comfortable with China than the Right. Where the South Korean Right would align with the United States, and somewhat with Japan, in the looming U.S.-Sino competition in Asia, the Left would not. It would likely seek a neutralist position.

Earlier this year, I argued that South Koreans care less about denuclearization than the United States given that the South Korean Left does not see North Korea as an enemy. Instead, it harbors deep animosity for Japan and American intervention in South Korea life. Thus, a nuclearized, unified Korea would be an ideal foundation from which to pursue a neutralist, non-aligned, post–unification foreign policy.

An old Korean proverb describes Korea is a “shrimp among whales.” For a small state surrounded by larger ones—China, Japan, Russia, and the United States—possibly stumbling their way into a major confrontation, holding onto nukes is not a bad idea. Like Switzerland—marooned for centuries in the middle of raging great-power conflicts—a unified Korea might well choose a heavily armed neutralism. Such a nonaligned or Finlandization strategy would help avoid a repeat of Korea’s late nineteenth-century fate. Then, this small state in the middle of much larger competitive ones got was manipulated by them in a “great game.” Korea was sucked into this regional competition even though it did not want to be. It eventually lost its sovereignty to imperial Japan and was next riven by the Cold War.

Nuclear weapons, coupled with today’s powerful, capable, Korean militaries, would permanently vouchsafe this unhappy possibility—much as France sought nuclear weapons in part to assure that Germany would never invade it again. Once Korean unification is achieved, why align with the various regional whales as they crash into each other, possibly sparking a major regional conflict? Korea’s geography would, as before, make it difficult to avoid getting sucked into a four-party conflict—China, the United States, Russia, Japan—but nuclear weapons would make easier. The temptation to keep them—as tool to push back on Korea’s difficult political geography—will be high.