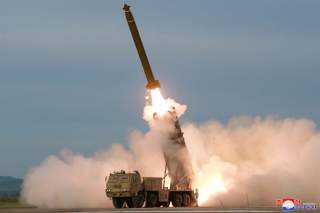 An adage amongst long-time North Korea watchers is that “something is important to Pyongyang . . . until it isn’t. And it isn’t important . . . until it is.” The saying reflects the shifting priorities the regime places on its demands of the United States and international community in return for denuclearization. Like a parched nomad chasing a desert mirage only to have it disappear, U.S. diplomats often have found that a key North Korean demand has vanished in favor of a new requirement.

Pyongyang’s bait-and-switch technique seeks parallel paths to benefits while keeping diplomatic opponents off-balance. When a U.S. concession gains no traction with the recalcitrant regime, engagement advocates often suggested offering another to maintain “progress” or to “improve the negotiating atmosphere.”

A recurring North Korean demand has been for a security guarantee. In the 2018 Singapore summit statement, “President Trump committed to provide security guarantees to the DPRK, and Chairman Kim Jong-un reaffirmed his firm and unwavering commitment to complete denuclearization of the Korean Peninsula.”

Secretary of State Pompeo affirmed at the time that the United States was willing to offer North Korea “unique” security guarantees if it embarked on such denuclearization. “We will take actions to provide them sufficient certainty that they can be comfortable that denuclearization is not something that ends badly for them.”

After the 2019 Hanoi summit failed to achieve progress, North Korean foreign minister Ri Yong-ho announced that “the security guarantee is more important to us [than sanctions relief] in the process of taking the denuclearization measure.” After meeting with Kim Jong-un, Russian president Vladimir Putin announced that North Korea would denuclearize. “They only need guarantees about their security,” he said. “That's it.”

What’s In a Name?

The Trump administration discovered that North Korea has very different definitions for seemingly straightforward concepts such as “denuclearization” and “Korean Peninsula.” Equally contentious could be an agreed-upon definition of the parameters and requirements of a “security guarantee.”

Is Pyongyang seeking a security guarantee, a security reassurance, a declaration of non-hostile intent, or a nonaggression pact? Under an agreement, what would be guaranteed—no preemptive or preventive military attack, North Korean national sovereignty, or Kim family regime survivability? What form would a guarantee take—a paper declaration, an end of Korean War declaration, or peace treaty? Or would it be part of more expansive confidence-building measures and military force reductions?

Pyongyang has repeatedly declared that it will never abandon its “treasured sword” of nuclear weapons, which it depicts as the only way to deter a U.S. attack. However, Washington never attacked North Korea during the decades that Pyongyang didn’t have nuclear weapons despite repeated regime military attacks, acts of terror, nuclear threats, and incursions.

What written security assurance could President Donald Trump provide that would dissuade North Korea from possessing nuclear weapons? After all, the United States has repeatedly provided such promises in the past—to no avail. In the 1994 Agreed Framework, Washington committed to “provide formal assurances to [North Korea] against the threat or use of nuclear weapons by the U.S.”

In the 2005 Six-Party Talks Joint Statement, the United States pledged it “has no intention to attack or invade [North Korea] with nuclear or conventional weapons.” Former National Security Council official Victor Cha compiled a list of over twenty U.S. security assurances to North Korea in a 2009 study.

The Trump administration has made a number of similar statements, including then-Secretary of State Rex Tillerson’s comment that the U.S. “will not seek a regime change, a collapse of the regime, an accelerated reunification of the peninsula, or an excuse to send [U.S.] military north of the 38th parallel.”

Given the failure of previous U.S. security assurances to deter North Korea from expanding its nuclear arsenal, is Pyongyang seeking more tangible actions from Washington? North Korea defines the Korean Peninsula not as the landmass encompassing North and South Korea (as the United States does), but adds “surrounding areas from where the Korean Peninsula is targeted [and] South Korean territory, where U.S. nuclear weapons and other forms of aggression forces are deployed.”

Therefore, Pyongyang requires “completely removing the nuclear threats of the U.S. to [North Korea] before it means the elimination of nuclear deterrence.” The nuclear threats would include deployment of U.S. “nuclear strategic assets and nuclear war exercises” and the U.S. extended deterrence guarantee (“nuclear umbrella”) to its allies. Pyongyang includes Japan, Guam, and sometimes Hawaii in its definition of the Korean Peninsula.

Think Carefully Before Getting on the Horse Again

Despite North Korea’s reluctance to engage in working-level meetings, diplomacy should be continued to determine the conditions under which North Korea would comply with the eleven UN resolutions that require the regime to abandon its nuclear, missile, and biochemical weapons programs in a complete, verifiable, irreversible manner.

U.S. diplomats should ensure that the definition and connotations of a security guarantee are well-defined rather than presuming a common understanding. Any security guarantee should be reciprocal, since the United States and South Korea are not the ones who have repeatedly violated UNSC resolutions, conducted deadly military attacks, and habitually threatened the government and populace of rival nations.

Negotiators can also explore expanding the confidence- and security-building measures of last year’s inter-Korean Comprehensive Military Agreement. Provisions in the 1999 Vienna Document provide a basis for a more wide-ranging accord to reduce tensions and the potential for inadvertent escalation of hostilities.

Any North Korean demand for a change in the status of U.S. forces in South Korea must be done in the context of more comprehensive negotiations, which must also address the North Korean conventional force threat to South Korea. The 1990 Conventional Armed Forces in Europe Treaty provides an example of how to mutually cap and wean away military forces from the forward area to reduce the potential for an invasion.

The failure of all previous denuclearization agreements with North Korea does not preclude additional attempts. But, given the lack of progress since the Singapore summit, skepticism and wariness are warranted. The best policy for the United States is a comprehensive strategy of diplomacy, upholding UN resolutions and U.S. laws, and deterrence until the nuclear, missile, and conventional force threat is reduced.

Bruce Klingner is The Heritage Foundation’s senior research fellow for Northeast Asia. He previously served twenty years with the U.S. Intelligence Community, including as CIA’s Deputy Division Chief for Korea.