Years of Bitterness Have Contributed to the Seoul-Tokyo Trade Rift 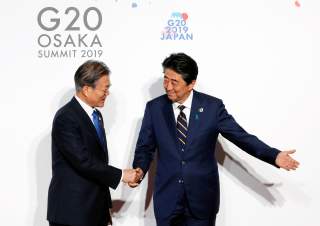 Relations between the United States’ two key allies in East Asia, Seoul and Tokyo, have always been tenuous. The shadow of unresolved issues left over from Imperial Japan’s colonialism and the Pacific War has always made alliance-management in the Pacific a sensitive issue for Washington. There is no formal regionwide NATO-like security structure in place in Asia, as in Europe—and this is at a time when American security priorities are shifting increasingly from Europe and the Middle East toward Asia.

The latest dispute between Seoul and Tokyo erupted late last year after South Korea’s Supreme Court upheld a lower court’s ruling that Japanese corporations compensate Korean workers for forced labor during World War II. Tokyo contends that all compensation claims, both public and private, were settled by a 1965 Claims Settlement Agreement, which was part of the treaty that normalized relations between the two countries and included an $800 million payment in loans and grants. South Korea contends that the 1965 treaty does not preclude individuals victimized in the colonial or war periods from seeking individual compensation as was the legal practice with regard to Nazi victims in Europe.

Japan seemingly retaliated this summer with export controls on three materials crucial to South Korea’s semiconductor and other export industries. Japan supplies South Korea with between 70 and 100 percent of these various materials, according to The Diplomat. The author of the article pointed out that some in Japan have implied “that Seoul allows some of these sensitive materials with military applications to reach North Korea” for possible use in chemical and nuclear weapon production. To be clear, no concrete proof has been provided on this claim. Seoul has publicly stated that it has “an advanced control system over strategic materials, which is well acknowledged by the international community.”  According to the Washington-based Institute for Science and International Security assessment of national control over strategic materials, South Korea is ranked 17 while Japan is ranked 36.

Payback over actions related to long-simmering issues has been a standard postwar tactic used by the Japanese right-wing population. But the use of trade in retaliation to achieve political goals is something new for Japan, which has greatly prospered in the postwar era of global free trade.

This sudden action, escalating bilateral tensions and striking at the heart of South Korea’s economy, also will likely adversely influence the global supply chains of the semiconductor industry, with negative impact on general machineries, automobiles and petroleum products. As a result, on July 23, six U.S.-based ICT trade associations sent letters to Seoul and Tokyo’s Trade Ministers expressing concern over Japan’s export restrictions and asking for a swift resolution of the issue. In 2018 South Korea represented 73.4 percent of the global market in production of semiconductors.

The July 1 announcement by Japan’s Ministry of Economy, Trade and Industry (METI) came as a complete surprise to Seoul, with no prior notice or consultations. Tokyo took a second step in early August by removing South Korea, its third largest export destination, from the whitelist of countries eligible for comprehensive preferential treatment in the export process. Seoul has sought to engage in dialogue on this critical trade issue, both bilaterally and through the UN, but Tokyo so far has declined these offers. An outside mediator may well be necessary to get things back on track.

Unlike its predecessors, the Trump administration has largely adopted a hands-off attitude with regard to the growing friction between its key allies. Alliance management or “keeping faith with our allies,” as former Secretary of Defense Gen. Jim Mattis pointed out in a recent essay in the Wall Street Journal, remains imperative for the continued security and prosperity of the United States. Going it alone, as Mattis further noted, and not embracing allies is an unwise policy option that puts America “at increasing risk.”

Trump, however, has shown little interest in mediating the dispute. Commenting on South Korean-Japanese tensions last month, the exasperated president reportedly asked: ‘”how many things do I have to get involved in?” Trump caused further uproar recently by imitating the Asian accents of South Korean president Moon Jae-in and Japanese prime minister Shinzo Abe at a domestic political fundraiser. At the recent G7 Summit in France, the president concentrated on pursuing an “America First” trade agreement with Tokyo and in getting Japan to buy more American corn rather than trying to do alliance repair.

Meanwhile Beijing, seeking to gradually dislodge American influence in the Pacific region, reportedly stepped into the breach last week. When the foreign ministers of the three countries met in China to discuss trade, among other issues, Chinese foreign minister Wang Yi called on Tokyo and Seoul to resolve their differences “through dialogue,” according to an CNBC Business News report. “Now that China is mediating, the U.S. will likely get involved too,” political analyst Paul Triolo stated in the report. He added, “From the U.S. perspective, this is a lose-lose confrontation, which could also inadvertently benefit China.”

In 2014, in contrast, when the often tumultuous relationship between South Korea and Japan had reached another impasse over the “comfort women” issue, President Barack Obama stepped in to mend fences. Former president of the Republic of Korea, Park Geun-hye, who was in office for over a year, had yet to meet with her Japanese counterpart, Abe, due to the disputes over historical issues. With the growing nuclear threat posed by North Korea and the transformation of the East Asian security and economic status quo caused by a rising China, Washington found the inability of its two security partners to get along to be increasingly unacceptable.

At the time, Obama decided to take the bull by the horns. At a Nuclear Security Summit held in The Hague in March of 2014, Obama served as the proverbial matchmaker to bring Park and Abe together to discuss trilateral cooperation to meet East Asia’s growing security concerns. Sitting between Park and Abe, Obama declared that “it is the first time that the three of us have an opportunity to meet together (on) some serious challenges that we all face.”    The three leaders discussed “specific steps to deepen that coordination,” including “military cooperation that includes joint exercises and on missile defense,” Obama added.

The American president’s efforts bore fruit when, in the waning days of his administration in November 2016, Seoul and Tokyo signed a long-stalled agreement on military intelligence sharing. The General Security of Military Information Agreement, or GSOMIA, was a concrete step forward for the two neighboring countries to step up cooperation in the face of North Korea’s ongoing nuclear and missile tests.

Seoul raised the stakes when it announced on August 22 that it will pull out of the GSOMIA, up for renewal this fall. This is at a time of renewed regional tensions, given North Korea’s ongoing missile tests this summer and Russia’s recent violation of South Korean airspace. A whole series of cooperative measures between Seoul and Tokyo, not only in the security realm but also with regard to trade matters with global implications, seem to be in jeopardy.

This latest development, with its clear adverse security implications, has at last apparently grabbed Washington’s attention. Secretary of State Pompeo publicly expressed being “disappointed” over South Korea’s decision. In reaction, Seoul may be walking back a bit on its decision. The Korea Herald reported on August 27 that Prime Minister Lee Nak-yon told government and political leaders at a recent policy meeting that “There are about three months until November 23 when the GSOMIA expires. I think it is possible that a solution could be found in that time, and Japan’s unjust measures could be reversed and we could review the decision to end GSOMIA.”

Once again, unresolved issues from the dark days of the Pacific War, and even further back into the colonial era, threaten to undo the hard-fought gains the United States has achieved in cooperation with its two key Pacific allies. A right-wing political establishment in Tokyo has taken a distinctly different approach to its Axis history than its two former allies, Germany and Italy.

The Italians, in fact, wished to make such a sharp break with the past that in a national referendum in 1946 they voted to end the long-standing monarchy, the House of Savoy, in favor of a republic because of the monarchy’s extensive collaboration with Mussolini and the Fascists. Historic records indicate that Japanese Emperor Hirohito was far more involved in the day-to-day execution of the Axis powers’ Pacific Theater operations than Italy’s monarch Victor Emmanuel III ever was in Mussolini’s intervention in the Spanish Civil War, Ethiopia and Albania.

Immediate postwar Allied decisionmaking on how to manage the occupation of Japan versus the occupation in Europe allowed for the evolution of an entirely different historic narrative in each region. While the Germans and Italians accepted public culpability for the war crimes of their Nazi and Fascist governments, postwar Japan developed a narrative of victimization, because of the atomic bombings, and of a “noble, lost cause” (similar to the U.S. Confederacy) of a just but failed attempt to “liberate” its Asian neighbors from Western imperialism. The specter of these unresolved issues continues to haunt bilateral relations between Japan and her neighbors and to undermine the necessary cooperation among U.S. allies that makes possible a peaceful and prosperous Pacific.