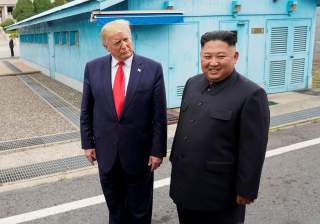 The year-end holidays, including New Year’s Day, have come and gone without an ICBM test or nuclear test by North Korea. There was no provocation, despite the ominous remark by a North Korean foreign ministry official in early December about an impending “Christmas gift,” which seemed to coincide with Pyongyang’s preference for diplomatic progress with the United States by the end of 2019. Why Kim Jong-un skipped the weapons test, no one knows exactly, but there are plenty of theories, including back-channel diplomacy, the timetable of any new weapons system, and the desire to keep options open.

What we are left with instead is a somewhat cryptic party plenum speech about North Korea’s future direction, which is open to interpretation. A close reading of the language Kim used might suggest reason for hope that North Korea remains open to dialogue with the United States but also that further improvement or deterioration in the relationship is contingent on Washington’s actions, and therefore the ball is squarely in President Trump’s court as to what happens next.

The breadth of bad predictions about what would happen during the year-end holidays is a reminder about the power of confirmation bias. As Harry Kazianis of this publication noted, North Korea is yet another topic in which hundreds of people can look at the same event and see dramatically different things. Around the time of the “Christmas gift” remark in early December, I met with a source familiar with the North Korean leadership's thinking who anticipated no big provocative military move by Pyongyang before the end of the year, despite the panic in the Western press. His logic was so unorthodox yet persuasive that I was afraid my own bias for peace, as I have advocated for nearly 20 years, was preventing me from assessing it critically. As a result, I refrained from making predictions over the past month.

My source’s argument went something like this: Kim appreciates his personal rapport with Trump and the fact that Pyongyang and Washington are engaged in dialogue. Kim sees Trump as a clear departure from previous U.S. presidents and would prefer to continue to work with this unconventional, transactional administration to achieve security for his regime. (In fact, incremental, transactional, bilateral diplomacy might be the new normal in Washington going forward.) Kim wants his own regime’s survival first and sees a Trump administration as conducive to that goal. Kim, therefore, would like to see Trump reelected in 2020 and will take actions to help that happen. The year-end deadline, this friend said, could be a made-up reason, or a bargaining chip, to create a sense of urgency before Kim’s New Year’s speech but also after the impeachment process and before the U.S. presidential election, thus actually helping Trump. If the deadline passed, his theory went, Kim would do something that was ambiguous and open to interpretation.

I wanted to believe that avoiding a confrontation between the United States and North Korea was possible, but was the notion that Kim wants to help Trump too outlandish? It was persuasive because it acknowledges the two-level nature of negotiations. International diplomacy is a multi-level game with an indefinite number of innings. It also cast doubt on what we think we know about what North Korea will do. After all, the “hyperventilating media” had warned us of an impending ICBM test, marking a disastrous end to U.S. diplomatic efforts. And when it didn’t happen, the media contorted itself to make the case that Kim’s statement about possibly ending the moratorium on weapons testing was just as bad as an actual test. It wasn’t. John Bolton actually argued that Kim’s statement alone was reason to resume U.S. military exercises with South Korea. When you carry a hammer everything looks like a nail. Talk about bias. With all this froth in the media, I wonder how many Americans assume North Korea did conduct a weapons test; and, it’s doubtful the average American has time to parse Kim’s seven-hour speech.

With our biases as a given, what might be an optimistic interpretation of Kim’s speech? Given the conditional nature of Kim’s threats, it would be seen as a continuation of hardline negotiations. Kim did not mention or insult Trump by name and did not announce a date for an upcoming weapon test. (Former U.S. official Joel Wit has noted that in lieu of a weapons test, Pyongyang might deploy mobile ICBM platforms or launch a ballistic-missile armed submarine.) As writer Tim Shorrock pointed out, Kim’s threats in his New Year’s speech were contingent on U.S. behavior: They depended on “U.S. attitude… whether the U.S. stalls for time… U.S. assumptions… U.S. wasting time… and U.S. hostile policy.” This kind of conditional logic sets up a modus ponens framework for the United States to avoid a worsening situation if it wishes. Pyongyang is talking to Washington; it’s still bargaining, signaling its preferences.

Most crucially, Kim warned his country to not sacrifice security for economic benefits. North Korea is not asking for golf courses or to become another South Korea. But at almost no cost, the United States could alter the security environment in a positive way in Asia by jointly declaring an end to the Korean War. The United States has learned from its endless wars in Iraq, Afghanistan, and on the Korean Peninsula that it cannot spread democracy by force or edict. But American power can be used for good by creating incentives for peaceful behavior. As Reagan defense official Fred Ikle noted, every war must end. It’s past time for the United States to declare an end to the endless Korean War. Kim has left a small opening for Trump to move forward. Trump just needs to push on the open door.