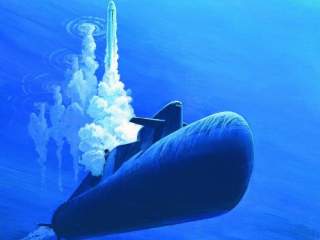 New Delhi’s first indigenous nuclear-powered submarine has passed all of its sea-trials and is ready to be formally inducted into the Indian Navy. According to Indian media reports, the nuclear-powered ballistic missile submarine has been undergoing a series of diving tests and weapons trials over the past five months.

“It has passed all tests and in many things has surpassed our expectations,” a senior India Navy official told the Economic Times. “Technically the submarine can now be commissioned at any time.”

Called the Arihant, the 6,000-ton displacement submarine—which draws heavily from Russian technology—carries twelve indigenous K-15 Sagarika missiles with a range of 435 miles. Or, alternatively, it can carry four K-4 nuclear-tipped ballistic missile—each with a range of 2,200 miles. However, unlike U.S. ballistic missile submarines, the Indian vessel also has a hunter-killer role and will be armed with a host of torpedoes and anti-ship missiles. It is powered by an eighty megawatt pressurized water reactor and can reach a submerged speed of twenty-four knots.

Though Indian crews trained on a Russian Akula-class (Project 971 Shchuka-B) in preparation to man Arihant and the submarine draws on Russian technology, the boat is half the size of Akula. Further, the Arihant design does not seem to bear much physical resemblance to its Russian forebearer—at least externally.

Two more Arihant-class submarines are currently under construction at the shipyards in Visakhapatnam. The follow-on vessels will be larger and incorporate improvements over the lead boat. Arihant is the first of five nuclear–powered ballistic missile submarines that India is planning to build. The first-in-class boat reportedly cost $2.9 billion to complete.

Meanwhile, India is proceeding with the design work on a new class of nuclear-powered attack submarines. Six indigenous nuclear-powered attack boats are currently planned, but there are very few details available about those designs. Presumably, like the Arihant, the new attack submarines will be based on technology gleaned from the Russian Akula-class (Project 971 Shchuka-B). India has leased one such boat, which is called INS Chakra and may lease another Akula in the near future.

While Arihant is probably a good first step, India is likely to have its work cut out for it to eventually build boats that rival American or Russian designs.