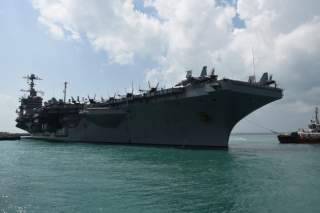 A government audit uncovered major flaws in the U.S. Navy’s oversight of contractors who service Navy ships in foreign ports. The Naval Audit Service report was completed in September 2014, but its details only became public last week thanks to The San Diego Union-Tribune, which obtained a copy through the Freedom of Information Act.

The audit found “significant internal control weaknesses” in the Navy’s administration of contracts to provide port services, known as “husbanding,” to the Fifth and Sixth Fleets in ports in Europe, Asia, and Africa. The audit concluded that the Navy “does not have sufficient internal controls in place to detect or deter fraud and abuse within all areas of the process.” As a result, the Navy is vulnerable to said fraud and abuse and does not have assurance it received the services and supplies for which it paid contractors $686 million.

The auditors observed several improper, as well as potentially fraudulent, business practices. For instance, the Navy acquired husbanding services at African ports using a cost-plus-a-percentage-of-cost contract, which is prohibited by U.S. law. This contract type is prohibited because it doesn’t incentivize the contractor to control costs (the more money the Navy is charged, the more profit the contractor will receive). In another instance, contractor Inchcape Shipping Services charged a markup for supplies and services that was not allowable per the terms of its contract. (Inchcape is currently fighting a False Claims Act lawsuit accusing it of having overcharged the Navy for husbanding services for nearly a decade.) The auditors also observed ship personnel signing receipts for goods and services that were not actually provided.

Navy Secretary Ray Mabus requested the audit in 2013 in response to the “Fat Leonard” bribery and fraud scandal. Leonard Glenn Francis, aka “Fat Leonard,” owner of Singapore-based husbanding company Glenn Defense Marine Asia, was charged with overbilling the Navy at least $20 million and bribing Navy personnel with cash, gifts, and prostitutes. So far, eight current and former Navy officers and sailors have been charged with accepting bribes in exchange for helping Francis win contracts, steering ships to ports in Asia that Francis controlled, providing him classified ship schedules, and tipping him off about government investigations into his business affairs. Last month, the highest-ranking officer ensnared in the scandal so far, Captain Daniel Dusek, was sentenced to nearly four years in prison on a charge of conspiracy to commit bribery.

The “Fat Leonard” scandal occurred in the Seventh Fleet area of responsibility, but the audit found that insufficient control over the access to and dissemination of classified ship schedules is also a problem in the Fifth and Sixth Fleets.

This was the fourth time since 2010 the Naval Audit Service identified deficiencies in the administration and oversight of husbanding contracts. The Navy told the Union-Tribune that it adopted many of the most recent audit’s 19 recommendations and has made changes.