3 Things to Know About Iraq's Protests 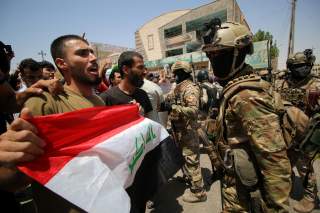 The recent protests across southern Iraq as the country’s political leaders remain locked in post–election negotiations are both a sign of hope and a warning signal of what may lie ahead.

On the positive side, the protests are a sign of resiliency: real activism and a diversity of views are alive and well in the country that was battered by the U.S.-led invasion fifteen years ago, a vicious civil war, and multiple terrorist threats. But they also offer a warning sign to Iraq’s politicians that they need to address the everyday problems of ordinary Iraqis, or the country could slip back into disorder.

In recent years, it has been the dramatic rise and fall of two would-be states, an ISIS caliphate and an independent Kurdistan, that has captured international headlines, while southern Iraq slipped off the radar. This summer, as violence in northern and central Iraq reaches lows not seen in nearly a decade, it is the south that has caught fire.

Fed up with filthy water and a cut-off of Iranian-supplied electricity in scorching summer heat, people in Basra began protests that have spread across southern Iraq. As one protestor put it, “I am demanding water in 2018 and I have oil that feeds the world.” Protesters blocked roads and sought to disrupt Iraqi oil fields as they endured record-breaking heat.

What should Western officials make of these protests? Below are three takeaways.

1. Iraqi nationalism endures and Iraq is not “lost” to Iran. In fact, the idea that Iraq is “lost” is a refrain one hears attributed to some senior Trump officials as they prioritize other regional issues. It is a self-fulfilling rationalization for failure masquerading as savvy strategic thinking.

Basra’s protests—which included burning Iranian-backed militia offices and images of Iran’s Ayatollah Khomeini in effigy—show that Iraqi Shia are far from monolithic in their views. Some do have close ties with Iran, their neighbor who exercises influence ranging from bribes to coercion over family members. But many, including Minister Abadi and Moqtada al-Sadr who lead to large Shia electoral blocs, want to claim distance and counterbalance Iraqi ties to Iran.

One hears different things as to whether U.S. pressure on Iraq’s government over payments to Iran for electricity – which U.S. officials reportedly feared were being diverted Iran’s Revolutionary Guard, and which could expose Iraq to secondary anti-Iran sanctions – might have contributed to Iran’s decision to cut off supplies, which sparked the Basra protests. What is clear is that it exposed a deep undercurrent of Iraqi nationalism that attempts by Iran or anyone else to undermine Iraq’s sovereignty. This is true even in Basra, whose sons volunteered in droves for militias and received Iranian assistance to fight ISIS in Sunni and Kurdish areas. One of the authors of this piece recently met with university faculty near Najaf and heard firsthand how the militia experience—which many westerners view as essentially sectarian—was often framed by Iraqi Shia in terms of national pride at rescuing Iraq from the tight grasp of terrorism.

Saudi Arabia recognized these shades of gray among Iraqi Shia and saw a political opportunity. As Iran cut off gas, Saudi Arabia stepped in to sell fuel. Also, the country plans to sell electricity seventy-five percent cheaper than Iran’s and offered to build a power plant.

2. Iraq’s Shia clerical elites are fed up with Iraq’s politicians. The top Shia religious leader, the widely-respected Najaf-based Grand Ayatollah al-Sistani, is known for his limited interventions to pull Iraqi politics back from the brink. But the Iraqi Shia clerical elite’s role as a pillar holding up Iraq’s political system may be coming to an end.

Iraqi Shia clerics—unlike their Iranian fundamentalist counterparts—espouse a centuries-old doctrine of political “quietism,” a separation of mosque and state reminiscent of U.S. founding father James Madison’s belief that “religion and government will both exist in greater purity, the less they are mixed together.” However, since the fall of the dictator Saddam Hussein in 2003, waves of successive crises—invasion, occupation, insurgency, civil war and ISIS—forced Iraqi Shia clerics to bend their quietest principles to take a greater role in politics.

That may be changing. In the past, Grand Ayatollah al-Sistani broke from his past practice of telling Iraqis it was their religious duty to vote. This year, he told them it was their choice—a rebuke of corrupt political elites one official called a “yellow light.” Now, Sistani has come out in support of nonviolent protests against Iraq’s political class, stating that Basrans face an “extreme lack of public services.”

Iraqi Shia clerical elite may be seeking to revert to their old posture of maintaining greater distance from Iraqi politics and its discontents after years when successive crises required their intervention. As one Iraqi explained to one of the authors, in case of emergency, a starving Muslim is allowed to eat a dead animal on the roadside regardless of dietary rules: in the same spirit, Iraq’s Shia religious establishment “tried politics and didn’t like the taste of it.” For those who have counted on their stabilizing role, that should be cause for concern.

3. Iraq is winning the war against ISIS—it now needs international support to secure the peace. Iraqis have turned the corner from defeating ISIS to demanding services and jobs—and U.S. policy needs to do the same to advance America’s long-term security interests by helping Iraqis win the peace. This would help keep ISIS and Iran at bay, but even more importantly it would provide a template for cross-sectarian cooperation in the heart of a bitterly-polarized Middle East.

But Iraqis are struggling to make that transition themselves. A post–election research trip to Iraq revealed a political system struggling to craft a credible response to Iraqis’ resentment. Iraqis see an oil-rich country that requires an IMF program to pay its bills; staggering wealth for a few via political corruption; and blackouts, brackish water, and poor job prospects for the rest. These conditions exist for similar protests in Sunni and Kurdish areas of the country as well if the Iraqi politicians who contested the elections aren’t seen as developing an effective response.

That is why protests can be a constructive force in sustaining a sense of urgency among Iraq’s political class. And it is why outside help for Iraq is likely to fail unless it goes beyond military training to meet the needs of Iraq’s new moment. The U.S. decision to continue training Iraqi troops was necessary, but insufficient. A broader set of engagements is needed, including U.S. diplomacy regarding government formation, technical support for economic reform, improved governance and service delivery, decentralization, and anti-corruption. Another key U.S. priority with the next Iraqi government must be to sustain and expand the Gulf-Iraq opening and help pivot from warm rhetoric and symbolic gestures to investments and results. Wariness and realistic expectations are warranted given Iraq’s enduring challenges. But the rise of ISIS underscores the dangers of simply walking away. Finding a sustainable military and diplomatic posture that is neither massive reoccupation nor full withdrawal—that puts Iraqis in front but gives America enough influence to shape Iraqi decisionmaking will not be easy, but it is possible. By the same token, America does not want or need to eradicate Iranian influence inside Iraq: simply ensuring Iraqis have the balanced foreign ties and strong domestic institutions to exercise sovereign independence would be a significant win.

In summary, the Basra protests show the diversity and dynamic shifts of Iraqi Shia communities often painted with too broad a brush. But they also show the desperate need to follow the war on ISIS with campaigns for services, jobs and cleaner government. Reducing Iraq to an appendage of Iran or assuming that ancient hatreds doom Iraqis to perpetual bloodshed obscure more complex realities and also distract from the continued stakes for the United States. Iraq remains on the frontlines of three struggles: the fight against extremist groups like ISIS and its sure-to-come successors; the chance to prove that Middle Easterners of different sects and ethnicities can still peacefully coexist; and the struggle to help Iraq and other small nations protect their sovereignty and stability in a time of polarization and proxy war. America has a stake in all three. As Iraq’s focus moves from north to south, and from the battlefield to jobs and governance, United States policy must continue to evolve to engage and compete in the fight to keep Iraq autonomous and sovereign.

Daniel Benaim is a senior fellow at the Center for American Progress and a visiting assistant professor at New York University’s Program in International Relations.  He previously served as a Middle East adviser and speechwriter in the Office of the Vice President, on the secretary of state’s policy planning staff, and on the professional staff of the Senate Foreign Relations Committee. He was awarded an International Affairs Fellowship at the Council on Foreign Relations. Benaim has an undergraduate degree in English literature from Yale University and a Master of Arts in law and diplomacy from the Fletcher School at Tufts University.