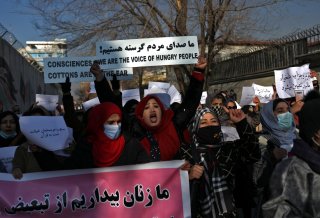 On the night of January 16, 2022, a group of armed men from the Taliban’s intelligence service entered the apartment block of Tamana Zaryab Paryani, a human rights activist who had played a key role in organizing women’s protests in Kabul's Parwan two district. When the men arrived and began kicking down her door, Paryani was alone with her sisters at home. Instead of attempting to flee, she took out her phone, recording the moments before her abduction. “The Taliban have come to my house,” she said into the camera. “My sisters are at home.” As the men broke into her home and grabbed her, she screamed for help, pleading for the men to leave before the video’s abrupt end.

Paryani’s disappearance was never formally acknowledged by the Taliban’s government. Her release the following month was equally ambiguous; local officials never filed charges against her or accused her of breaking the law. Paryani’s case is far from unique. Over the past year, the Taliban have detained scores of prominent women’s rights activists, including Mursal Ayar and Zahra Mohammadi, only to release them weeks later without charge or explanation. Some, particularly in Afghanistan’s northern Balkh province, continue to be imprisoned without charge.

After the Taliban’s conquest of Kabul in August 2021, many separate groups within Afghanistan—ethnic and religious minorities, regional leaders, and employees within the former government—feared for their safety and continued well-being under the new government. However, no larger group within Afghanistan has had greater cause to worry than its women, who were forced into third-class citizenship during the Taliban’s first iteration in power from 1996 until 2001.

The Taliban’s actions in the post-takeover era have largely borne out these fears. Outside of a few isolated sectors, and where their continued employment is essential to the country’s functions, women have been barred from employment. Girls aged twelve and older are no longer allowed to attend school. The new government has also forbidden women from engaging in business, appearing in public, and traveling beyond a certain distance without the accompaniment of a male guardian.

In many ways, these restrictions have been consistent with the Taliban’s policies during its initial ruling period. However, in the two interceding decades, conditions in Afghanistan—particularly in Kabul, the country’s largest and wealthiest city—changed dramatically. An influx of aid from the United States and Europe helped to modernize Afghanistan, creating an educated professional class for the first time in its recent history. The status of women reflected these changes. Before the Taliban takeover, women from every region and socioeconomic background worked as nurses, teachers, engineers, media professionals, lawyers, human rights activists, and in thousands of other professions. In late 2021, while the men of Afghanistan laid down their arms and accepted the rule of the Taliban, many of these women refused to surrender their places in society and launched the first protests against the new restrictions.

The protest movement began in Herat on September 2 and quickly spread to Kabul and Mazar-e-Sharif. Within two days, roughly one hundred women had gathered in front of the country’s former presidential palace carrying banners and chanting slogans calling for an equal society. These spirited protesters soon inspired other women in Afghanistan to rise up in other provinces of the country. However, although the protest movement has spread nationwide, Kabul remains its epicenter and location of the most serious confrontations between the protesters and the Taliban.

For the most part, the protesters have not directly called for the Taliban’s overthrow. Instead, they have protested their dismissal from work and the hardships imposed on them by the new government. “We decided to protest to demand our basic rights—the right … to work, and to participate in politics,” Arezo, a young woman from Kabul, explained. “We want the Taliban to know that they cannot eliminate us from society.”

“We told them [the Taliban] that we want to continue working,” another protester said. “They say only female nurses and teachers are allowed to work. We are engineers and lawyers, and we want to work in our professions.”

Other protesters expressed anger at the Taliban’s prohibition on girls’ education. “Afghanistan is the only country in the world where girls over the age of twelve cannot go to school in the 21st century,” Halima Ahmadi, a protester, said. “Whatever I do, it is for my two daughters. How can we be silent in the face of these injustices? How can I look into the eyes of my daughters when they grow up and they will not be able to go to school?”

To contain the protests, the Taliban resorted to the use of force. Its government has arbitrarily detained protesters, including Paryani, and has broken up marches by beating their participants in broad daylight. During the most recent round of protests in Kabul, the Taliban’s soldiers seriously injured at least ten women, including Nargis (a pseudonym). “When I saw that they were badly beating one of the participants, I went to help, but the Taliban soldier hit me with a metal object, and I fainted,” she said. “All I remember is that there were two other women on the ground, and they were still being beaten.” In addition to physical force, the authorities have used tear gas and fired guns in the air, although they have, so far, refrained from killing female demonstrators outright.

The Taliban’s brutal tactics were neither original nor surprising. However, what has been surprising to many observers is the protesters' continued strength and tenacity. After a full year of beatings, kidnappings, and even forced disappearances, the women of Afghanistan have continued regular protests across the country. Their actions have emphasized to the world that the Taliban, despite its public gestures to the contrary, does not truly represent Afghanistan’s rich and diverse society and has underscored the fragile nature of the group’s hold over its captured peoples.

Fariha (a pseudonym), who has led a group of women protesters since early September 2021, was among twenty-nine women whom the Taliban arrested in February. “This is a matter of now or never,” she said after her release. “Currently, we are in a very complicated situation. The Taliban is looking for us everywhere. Despite the difficulties, we still continue to protest in every possible way.”

Fariha stressed the importance of protecting the achievements of Afghanistan’s women over the past twenty years and vowed that she and other women would not allow the Taliban to take away their rights. “Millions of women have sacrificed and fought for these achievements,” she said. “We cannot sit quiet and watch a violent group come and take everything away from us. If not me, millions of other women will continue to fight to protect those achievements. We know that it is a matter of now or never. If we don't fight now, we will be silenced forever."

Following threats against her life, Fariha moved to Pakistan, but she remains in contact with a network of women in Afghanistan to coordinate the ongoing demonstrations.

“I will definitely go back,” she said. “We don't stop fighting.”

Natiq Malikzada is a freelance journalist and holds a master’s degree in International Relations and Middle Eastern Affairs. He tweets @natiqmalikzada.