Is Afghanistan Headed for a Financial Collapse? 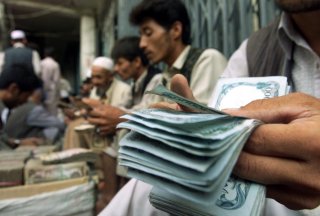 During the 1990s, as the Taliban implemented their strict vision of Islamic law across Afghanistan—including banning certain jobs, forbidding women from working, and generally neglecting their duties as government officials—the country’s licit economy shrunk significantly. After the group’s re-conquest of Afghanistan, which concluded with the capture of Kabul on August 15 and the flight of most of the country’s top leadership, renewed fears have circulated of another economic collapse.

One of the most disturbing observations has been the fact that three-fourths of the pre-Taliban Afghan government’s budget as provided by the United States, which has indicated that it will not continue to underwrite the Taliban. Washington has also frozen Kabul’s assets in the United States, preventing the Taliban from claiming them, and the International Monetary Fund (IMF) has declined to honor the country’s Special Drawing Rights (SDRs), effectively leaving it bereft of international aid.

The Taliban has some cash on hand. The militant group financed its twenty-year insurgency through proceeds from the drug trade, helping to turn Afghanistan into the source for ninety percent of the world’s heroin. The Taliban also seized cash from Da Afghanistan Bank, the country’s central bank, following the capture of Kabul—although much of the bank’s reserves left before they arrived, with $170 million allegedly accompanying former President Ashraf Ghani on his flight to Tajikistan.

The real question for the Taliban, however, is whether its prospective government will be able to run the economy in the years to come. It appears to be trying, at least in principle; the finance ministry announced that the group would continue to pay full salaries to government employees, and on Monday, the group appointed Haji Mohammad Idris, who served on the Taliban Economic Commission, to govern the central bank.

Unfortunately, Idris appears to have no formal financial experience, and most are not optimistic about his ability to reverse the country’s slide. This lack of confidence has been reflected in the markets, where the afghani, the country’s currency, fell more than eight percent against the dollar after the fall of Kabul. The price has remained stable for the past two weeks, but only because capital controls have made it virtually impossible to move money in and out of Afghanistan.

Within the country, the banks remain closed, and the markets are largely empty. Early reports have suggested that most Afghans are holding onto their afghanis, keeping money from circulating in the largely cash-based economy.