Afghanistan: Recovering from the Brink of Economic Collapse? 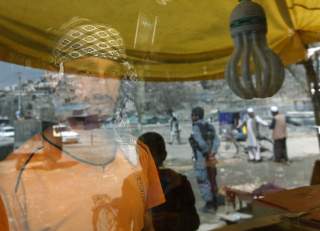 As recently as four years ago, Afghanistan’s war economy was on the brink of collapse when unemployment soared following the departure of thousands of American and foreign forces that had, in effect, created a parallel economy. At the time, the Afghan government had no functioning fiscal policy, formal corruption and mismanagement beset its taxation and revenue collection efforts, and the national budget was unbalanced and disorganized, spent mostly on white elephant projects. Budgetary shortfalls and economic volatility were especially tough on the most vulnerable—the poor and the unemployed, who make up the bulk of the Afghan population.

To reverse this troubling course, the Afghan government has since employed a series of measures to kickstart the country’s austere economy and to ensure macroeconomic stability. Among the measures include adopting a more measured budget process, reducing public spending and making painful cost adjustments to manage public finances better, increasing efforts for privatization and public-private partnerships, levying new tiers of taxes, and expanding economic and trade engagements through boosting regional connectivity. These sweeping reforms, still ongoing, have been part of President Ashraf Ghani’s ambitious self-reliance agenda, shepherded by its Ministry of Finance.

The short-term payoffs of the government’s reform plan are impressive.

Despite gloomy predictions, the Afghan GDP grew at a steady rate from 1.3 percent in 2014 to 2.5 percent in 2018. The government sustained its revenue growth by collecting a record level of revenues since 2015, consistently surpassing the IMF revenue targets by considerable margins. The government revenues collection efforts grew from $1.3 billion in 2015 to $2.4 billion in 2017, representing a 14 percent surge in dollar terms from 2016. The major sources of revenue growth include customs duty, sales tax, and income taxes, where customs duties recorded the most significant increase and constitute over 47 percent of Afghanistan’s national revenue. Revenue collection is projected to grow to over $3 billion by 2020 that would help to increase the revenue-to-GDP ratio substantially over time. Although the Afghan currency has depreciated by more than 40 percent in the last three years, the inflation has steadily remained low.

At Afghanistan’s customs system, an agency notorious for its corruption, several reforms were implemented that eliminated outdated systems. About half of the customs officials, including the deputy minister, directors-general, and revenue directors, have been removed and replaced by younger technical staff. The customs department has introduced a new Automated System for Customs Data to collect customs duties, which is now operational in 98 percent of customs locations. A second system, Standard Integrated Government Tax Administration System, further digitizes the tax administration process.

The Afghan government introduced a new tax law—the Tax Administration Law—which provides a legal framework for managing a centralized taxation administration. It also established a special court to resolve tax disputes. Tax registration system has been digitized for thousands of small taxpayers, and the government created a geographic mapping system to properly record the GPS coordinates of small and large businesses for tax collection in the future years. Meanwhile, the government has levied a 10 percent telecom tax, doubled the business receipts tax from two-to-four percent on businesses with gross receipts of over $8,500, approved the value-added-tax law to be implemented by 2020 on the taxable supply of goods and services, and has increased its over-flight fees for commercial airliners.

What’s more, the government has aligned the budget with national priorities, leading to an increase in public-private partnerships. Additionally, the Afghan government adopted its first-ever, five-year rolling budget management plan, which provides better control over government’s expenditure and improves ministries’ incentives for implementation. As a result of these reforms, the Afghan government has completed several reviews of the IMF Staff-Monitored program, which helped allow for Afghanistan to be removed from the grey list of the Financial Action Task Force, a global body that fights terrorism financing. These reforms have also helped the government to rebuild trust and credit with global financial institutions, including the World Bank, the IMF, and the Asian Development Bank, for future lending.

Additionally, the government has set out a five-year financial management plan, called the Fiscal Performance Improvement Plan, which maps out the country’s long-term path to fiscal sustainability. The program focuses on major reforms, including a clear articulation of national priorities, budget financing, and investments in processes that will eliminate corruption and improve efficiency. A second plan, the Afghanistan National Peace and Development Framework, has become the government’s five-year development narrative, aimed at transforming Afghanistan from an import-heavy to an export-heavy economy. To do so, the government has focused on expanding agricultural productivity by investing in water management, farm technology, irrigation and storage facilities.

Ghani’s plan for the next four years is to intensify his reform agenda to cultivate new revenue streams, focusing on four main pillars to grow Afghanistan’s sputtering economy: agriculture, extractive industry, regional connectivity and human capital. The plan is to invest nearly $3 billion in the mining and housing sectors respectively, increase the Afghan exports value by $2 billion, and generate roughly $6 billion in annual revenues by 2022.

Additionally, the government plans to complete the Turkmenistan-Afghanistan-Pakistan-India gas pipeline and wrap up the construction of three railway projects—two from stations in Turkmenistan’s Serkhetabat and Atamyrat to Afghanistan’s Torghundi and Aqina border towns, and another from Uzbekistan to Afghanistan’s Herat province. The Afghan government also plans to complete the construction of the fiber optics infrastructure ring to reduce the Internet price to meet the growing internal demand.

Meanwhile, Afghanistan, now a member of the World Trade Organization, is rapidly expanding its economic ties with the region. As such, as part of the Afghanistan-Pakistan Transit Trade Agreement, or APTTA, the Afghan government intends to revive two transport corridors—one from Herat to Kabul and another from Kabul to Lahore—meant to boost its economic engagement with Pakistan. At the same time, the Kabul government has enhanced its trade links with China and has begun to use a new transport corridor in Andijan, a strategic throughway in Uzbekistan, to supply Afghan products to the Chinese city of Kashgar in a week time. Moreover, the Afghan government is constructing hydroelectric dams along its border with Iran. By doing so, the government is likely to capitalize on its water resources by either reducing the free flow of water into Iran or reaching an agreement with the Iranian regime to pay for it. Estimates show that Afghanistan can potentially make as much as $3 billion a year if it sells its water to Iran.

To be sure, despite progress made towards self-reliance, the Afghan economy is still mostly donor-dependent. Despite a marginal increase in the total government expenditures between 2014 and 2017, donor grants provided to offset the Afghan budget represented an estimated 18 percent of the Afghan GDP. In 2017, for example, donor grants funded nearly $4 billion in local budgetary expenditures, covering over 60 percent of Afghanistan’s total budgetary spending. While down from 70 percent in 2015, such budgetary shortfalls have created critical fiscal gaps, mainly because of a substantial spending increase in Afghan security expenditures. Meanwhile, festering unemployment and formal corruption continue to pose considerable challenges to Afghanistan’s macroeconomic stability. These bleak indicators underline that the economic achievements of the past few years remain fragile unless they are sustained and stretched beyond the current government’s term.

Nonetheless, it is imperative to maintain an equilibrium between continuity and reform, without losing sight of the longer-term priorities for the Afghan economy. In late November, the Afghan government is expected to present on its many economic gains at an international conference co-hosted with the United Nations in Geneva. Beyond economic progress, the most significant achievement Afghanistan can potentially share with its partners is to deliver the upcoming Afghan parliamentary elections, slated for October 20. In the amorphous twilight of the Afghan war, Afghans are eager to break out of the current frustrating economic and political cycle. There is no secret about what needs to be done for that to happen.

Javid Ahmad, a nonresident fellow at West Point’s Modern War Institute, is a fellow at the Atlantic Council. The views expressed here are his own. Follow him on Twitter: @ahmadjavid.

Image: A shopkeeper stands inside a shop as people are reflected on a window panel in Kabul April 8, 2012. REUTERS/Omar Sobhani