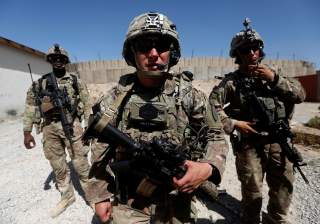 The recent Herat Security Dialogue, Afghanistan’s premier strategic forum, is the only place where the Afghan government, representatives or proxies for the Taliban, Iranians, Russians, Pakistanis, Indians and Americans come together. Unfortunately, the U.S. embassy’s refusal to attend the Dialogue’s events outside their own isolated compound for security reasons meant there was no official U.S. presence.

Discussions at the Dialogue were lively. After Mutasim Agha Jan, a former top aide and son-in-law to Taliban founder Mulla Omar, demanded that all foreign troops leave Afghanistan, an audience member asked if that would apply to the Chechens, Arabs and other foreign fighters whom the Taliban welcomes, let alone the Taliban’s Pakistani aides and minders. Agha Jan was evasive, simply saying if there was no jihad, then foreign fighters would have no reason to be in Afghanistan. Of course, when the Soviets left, the foreign fighters stayed behind.

There were no Afghans—from any side or political perspective—who doubted the Trump administration’s determination to leave. The frustration among Afghan government officials, feminists, and both Afghan and Pakistani liberals is that while the United States is determined to leave, U.S. efforts to undermine Afghanistan’s constitutional order is wrongheaded and guaranteed to worsen regional security.

Among the biggest debates between Afghans and the Taliban is the nature of Afghanistan’s future government. Most Afghans want an Islamic Republic headed by an elected president with a government accountable to the people. The Taliban, in contrast, seek an Islamic emirate led by a religious authority appointed by religious scholars but not subject to popular elections. For the Taliban, this bypasses their biggest weakness: lack of local support. The Taliban fiercely opposed elections because they realize the emir has no clothes. While many Afghans criticize their current government and its corruption, that does not mean they accept the brutal and intolerant Taliban ideology.

One of the compromises evidently discussed by the Taliban and diplomats is the idea of combining the republic and emirate. Just as China, in theory, embraces one country, two systems with regard to Hong Kong, Afghanistan would remain a republic but also incorporate an emirate in one or two provinces along Afghanistan’s border with Pakistan.

What sounds good to diplomats, in theory, would be an outright disaster in practice. First, Afghans believe the Taliban are as maximalist in their ambitions as they were twenty years ago; their goal is not local autonomy but domination over the entirety of Afghanistan. Second, the precedent is horrible. If in response to terrorism, the diplomats grant the Taliban a safe haven to govern and in which to train and plan, why would the same solution not apply to the Islamic Movement of Uzbekistan, Al-Shabab in Somalia, or Al Qaeda in the northern Sinai Peninsula? When, thirteen years ago, Pakistan allowed the Pakistani Taliban to take control of districts in the North-West Frontier Province, the group soon threatened Islamabad.

A major weakness of Khalilzad’s withdrawal agreement is its failure to hold Pakistan to account. That’s like striking a deal with Hezbollah in Lebanon or the Houthis in Yemen without acknowledging the influence, if not command, that Iran has over their movements. Here, Agha Jan was candid: “The Taliban got help from Pakistan. The Taliban got help from Iran, the Taliban got help from Russia,” he said. For President Donald Trump and his top diplomats and generals to ignore that the United States has been embroiled in a proxy war is to ignore the consequences that will go much farther than Afghanistan. If Pakistan, let alone Russia and Iran, were willing to aid and assist a group killing Americans, then was their grievance with the U.S. presence in Afghanistan or, more broadly, the United States itself? If Islamabad, Tehran and Moscow see that they can wear Washington down and promote their own interests by killing enough Americans, will they stand down as U.S. forces come home, or will they move on to the next target?

Trump is right to recognize that Americans are tired of “endless wars.” He is also correct to express frustration at the continued U.S. outlay—some $30 billion annually—to continue the fight. But, in Afghanistan as in Syria, the choice is not between war and peace or spending and saving, but rather between containing a fight or allowing it to spread and betraying an ally or actively serving it up on a platter to its mortal enemies.