America Is Addicted to Economic Sanctions 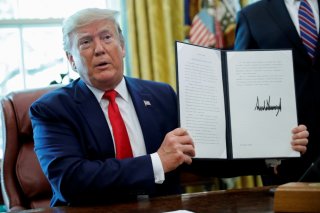 Washington needs a sobriety program to kick its growing addiction to economic sanctions. The number of trade and financial penalties the government has imposed on foreign bad actors has exploded over the past decade. In the absence of any public debate over these decisions, no one asks the question that should concern every American: are economic sanctions actually achieving U.S. foreign policy goals, or simply hurting the U.S. economy?

Unfortunately, even if that question were put to policymakers, they could not answer it. They are not required to assess the economic impact of sanctions on the United States, and they do not articulate clear political goals for the sanctions they propose, provide any measurement of whether they have achieved those goals, or lift sanctions that fail the test.

Americans would probably be surprised to learn that no government agency represents U.S. economic interests when sanctions policy is made. Policymakers know that trade and financial penalties have domestic costs but are not required to give them more than superficial consideration. Accordingly, the State Department and other agencies conduct “outreach” to large, well-connected companies, a group that is hardly representative of all U.S. economic stakeholders. It takes visible domestic damage to get the government’s attention, like when aluminum prices spiked after a Russian firm was targeted. Since costs to the home front are not a primary concern, there is no government-wide review of policy achievements, so sanctions are rarely lifted and can continue injuring U.S. interests for decades. This approach offers zero incentive to consider alternatives to sanctions and contributes to their overuse.

Indifference to the burden sanctions impose on the nation in the aggregate is not irrational. The United States has a large, high-performing, $20 trillion economy. As a Congressional Budget Office study concluded two decades ago, the costs to American businesses and workers adversely affected by sanctions “appear great to them,” but are not great to the nation as a whole.

But what if there is a disproportionate and adverse impact on certain groups and parts of the country due to industrial and demographic differences? Should the government apprehend the damage and forestall or ameliorate it—or even forgo sanctions for alternative policy tools?

America’s experience with globalization is instructive. Despite the enormous benefits to the U.S. economy of lowering the costs of doing business across borders, the loss of manufacturing jobs had a domino effect, hollowing out once-thriving communities and unleashing an epidemic of income inequality that is getting worse. The government’s failure to anticipate the damage to displaced workers and declining industries and help them adjust was one of the most consequential policy failures of the twentieth century because it fed the polarization tearing at the nation today. Globalization, of course, has a far greater impact on the economy than sanctions. But if present trends continue and discipline is not imposed, the economic and even political costs to the country of ever-expanding sanctions could be very damaging.

Looking at the U.S. economy in the aggregate may miss disparities in how costs of sanctions are born that should be weighted as economic sanctions become a policy tool of first resort. Trade is important to the economies of most states, but it contributes a larger share of state income for some, including Michigan, Louisiana, Kentucky, Tennessee, and South Carolina. Regionally, the South and the Midwest also have a greater number of counties that rely on export income. This reality shapes the perspective of these states and counties toward sanctions.

Take the trade embargo against Cuba. The political requirement to keep Cuba inside the penalty box until it becomes “stable, prosperous and free” has for decades been tied to a vocal constituency in Florida with influence over the state’s pivotal twenty-nine electoral votes. But what about the estimated $2 billion in potential U.S. exports if the embargo were lifted? Trade-dependent states like Louisiana, whose exports totaled $63 billion last year, see commerce with Cuba as an engine of economic growth. So do the small and medium-sized firms responsible for those exports. The U.S. Trade Representative even has a compelling statistic: every $1 billion in new U.S. exports supports 6,000 additional jobs at home that pay higher wages. Why do those jobs, profits and state revenues take a back seat to sustaining a failed, sixty-year-old embargo?

Walling off markets to Americans does not only affect large, resilient companies. About 98 percent of U.S. exporters are small and medium-sized firms. While only one percent of small businesses export, they account for about a third of total U.S. exports by value. These smaller firms can be disproportionately impacted by sanctions that disrupt global supply chains. Why does that matter? Because small businesses are job generators, accounting for half of private-sector employment and creating two-thirds of all new jobs in recent decades. They also generate a larger share of income in small communities. If they fold, it’s not just jobs and income that are lost, the social fabric of these communities can unravel. When three-fourths of the world's purchasing power is outside the United States, foreclosing opportunities to American firms, large or small, and the jobs they create, should not be undertaken lightly.

The risk of unintended consequences over the long-term is also high. Like any government intrusion into private enterprise, economic sanctions distort markets. Over time, what are the implications for the U.S. economy? When companies are subject to heavy penalties for non-compliance, are hedging behaviors emerging that could undermine U.S. economic welfare? America has, moreover, entered an era of superpower competition with a state-capitalist China. Beijing seeks to dominate global markets with its heavily subsidized companies. Unilateral sanctions, in particular, forfeit U.S. firms’ potential market share to their Chinese and other foreign competitors. Importantly, a large global commercial footprint expands China’s overseas presence and its ability to shape international institutions to suit its interests.

Fundamentally, the belief in economic sanctions as an effective tool of foreign policy rests on the faith that the U.S. economy is strong and delivering for Americans at home. That mindset has to guide the sanctions policy process in order to protect the public from unnecessary sacrifice and unintended consequences.

The solution is for the government to appoint a coordinator, with a seat at the table and a vote, to oversee a cost-benefit analysis of all proposed trade and financial penalties. The economic side of this analysis would focus on the impact at the state and local level (or on regional clusters), on businesses large and small, jobs, and industry sectors. The foreign policy side, as others have argued, should clearly articulate the political goal a sanction is supposed to achieve, how it could achieve that goal, and chances of success. Sanctions that fail to produce the desired result within a reasonable timeframe should be lifted. This cost-benefit analysis should be documented in an unclassified report to Congress every six months. A separate annual report should cover foreign hedging behaviors and other unintended consequences.

Sanctions, of course, are not the exclusive purview of the executive branch. Congress imposes its fair share, too. Embedding these requirements into the executive branch’s policy process, however, could compel a similar process in Congress. Nothing says political pressure, after all, like an unclassified report that reveals to the public the damage lawmakers may be doing when they fail to consider the costs to Americans of the sanctions they legislate.

Changing attitudes and practices in Washington will be an uphill battle. The seminal study on sanctions in 1997 estimated that they reduced U.S. exports by up to $19 billion, representing 200,000 jobs in the higher-wage export sector—numbers that are probably much higher today. Yet, a quarter-century later, the government has built a sprawling, multi-agency apparatus to develop sanctions. Alongside it has grown a lucrative industry of consultants who specialize in advising companies on compliance.

None of this is to say that economic sanctions have no role in foreign policy. Sparingly and judiciously used, they are an effective tool to respond to or contain developments adverse to U.S. interests and can pressure changes in behavior that threatens U.S. national security.

But it is irresponsible to wall off overseas markets to Americans without vetting the costs and consequences as well as the anticipated and actual foreign policy benefits. The government should not be writing-off potential sources of economic growth, especially now, as the nation confronts devastating levels of unemployment and financial distress from the pandemic along with disruptive technological changes that will put entire industries out of business.

These hard realities only magnify the shortcomings of Washington’s current approach to sanctions policy, which fails to consider and accommodate the economic interests of Americans. In order to govern with competence in these uncertain times, that has to change.

Ferial Ara Saeed is a consultant at Telegraph Strategies LLC, focusing on analysis of political and economic trends for business and government to mitigate risk. A former senior American diplomat with expertise on North Asia and the Middle East, she worked on sanctions, trade, national security, and foreign policy.