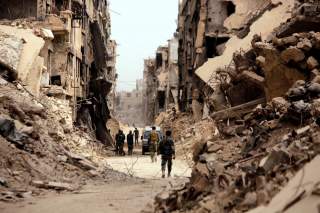 On September 26, the Senate Foreign Relations Committee passed the Caesar Syrian Civilian Protection Act. The Caesar Act has been applauded by Western media and anti-Assad forces, claiming that its passing “tightens [the] noose on Assad” and holds the “Butcher of Syria” accountable for his war crimes. Its legislative objective, as its name implies, aims to enhance U.S. efforts toward the protection of civilians (PoC) in Syria. If Washington seeks to employ the Caesar Act earnestly to help Syrian civilians and remain relevant in Syria’s stabilization and reconstruction process, it should look beyond congressional legislation. Instead, Washington should use nontraditional PoC measures, focusing on the pockets of influence it currently maintains.

What Does the Act Entail?

The Caesar Act, debated and tabled for more than a year, is named after a Syrian photographer who transported photographic evidence of human-rights abuses against civilians in Assad’s prison system. The primary focus of the legislation is to “halt the wholesale slaughter of the Syrian people,” by sanctioning the Syrian government, the central bank, and those affiliated with crimes against civilians. In so doing, these U.S. sanctions will help to reaffirm and enforce existing international laws that Syria and pro-Assad stakeholders have been violating, such as the responsibilities as prescribed by Chapter VII of the United Nations Charter and the Chemical Weapons Convention.

The directional nature of the legislation is clear—the United States is imposing sanctions against those that support the regime’s military capabilities, namely Syria itself, Russia, and Iran. Washington’s determination to sanction against Russian and Iranian technology trade and intelligence exchange is particularly salient as Moscow struck a deal with Damascus on September 24 to supply Assad with S-300 missile defense systems. Russia’s decision to sell one of its most advanced air defense systems comes after Syria’s missile-defense system accidentally downed a Russian plane on September 18, killing all fifteen members on board.

On many fronts, the Caesar Act takes proactive steps: promoting political settlement negotiations to end the war, holding Assad accountable in the International Criminal Court for war crimes, and positioning the protection of civilians as a core responsibility of both the host government and all relevant stakeholders. However, other provisions included in the legislation and the timing of its passing bring to question Washington’s motives.

Moreover, the Caesar Act has also been significantly diminished from its original version. The legislation initially called for an assessment of the potential effectiveness of a no-fly zone, a safe zone/humanitarian corridor run by the United States, and increased support for partnered forces. Now the primary operational section merely assesses the “potential effectiveness, risks, and operational requirements of military and non-military means to enhance the protection of civilians inside Syria, especially civilians who are in besieged areas, trapped at borders, or internally displaced.” This change in language reflects an understanding of the United States’ declining leverage in Syria and a harsh recognition that the realities on the ground are in the Syrian government’s favor. But, this reality does not negate a persisting commitment to civilian protection in Syria.

Traditionally, PoC is the primary responsibility of the state. And when a state is either unable or unwilling to protect, a United Nations Peacekeeping force can be mandated authority and responsibility to protect within their capabilities and areas of deployment. Since the unanimous acceptance of the 2005 World Summit’s outcomes document, the international community has been called on to take collective action through the UN Security Council (UNSC) in situations where a host state is “manifestly failing” to protect its civilians. But after contentious applications of PoC, the Responsibility to Protect (R2P), and post-conflict reconstruction in cases such as Kosovo, Darfur, and Libya, established international norms have lost their viability.

There have been twelve instances of failed votes in the UNSC trying to condemn violence in Syria and promote the protection of civilians. Moreover, there have been displays of unilateral use of force and proxy warfare propagated by Washington, Tehran, Moscow, and Ankara within Syria’s borders. All of these parts of Syria’s case begs the question: who is responsible for protecting civilians when both traditional PoC pathways are either insufficient or absent? The prospect of a traditional Geneva process facilitating Syrian PoC is nearing all but impossible. For the United States, whose presence in Syria has a direct impact on civilians (specifically those directly or indirectly settled in territory under the U.S.-led coalition control), a measure of responsibility is relegated to the United States to protect, to the greatest extent, those seeking safety. If the end goal of the Caesar Act is genuinely to protect civilians, the United States, despite UNSC resolutions being off the table, should play an active role in protecting civilians in Syria.

To do this, the United States should pursue an alternative, nontraditional PoC strategy. This involves the non-binding and moral responsibility of secondary actors (states, international organizations, and local civil society) to design and implement protection PoC activities. These activities must be in areas of operation where (a) the government is unable or unwilling to protect its civilians, or (b) the United Nations and the international community is unable to carry out traditional PoC activities pursuant to R2P, UN Charter Chapter 7 mandates, and UNSC resolutions (such as 2254). These activities would be based on the traditional Protection of Civilians mandate, with slight contextual changes given the absence of host-state participation in the non-traditional case.

A nontraditional PoC should include:

As non-traditional PoC is not rooted in international normative precedent, its application is predicated on a nuanced and sensitive contextual application, seeking to delineate which partners are viable for facilitating protection and how activities should be organized and implemented given the U.S. position in the broader conflict. At the same time, non-traditional PoC in the Syrian case should not be employed by way of establishing a U.S. precedent for unilateral intervention that may be applied in future cases of conflict, but rather to promote protection of civilians in cases in which a host state or major allies ignore their normative call to protect all civilians. Non-traditional PoC should begin immediately, not waiting until the Assad regime reclaims the entirety of Syria and the war is officially ended. After that point, U.S. efforts on the ground would be deemed illegal by international law.

As it stands, Turkey and Russia are both currently leading their own bilateral PoC processes, which are integrated with stabilization and reconstruction within Syria, but both focus more on protecting civilians within their allegiances rather than protection of civilians more generally. For Russia’s PoC, protection is only provided for those living under government control and those seeking to reconcile with it. For Turkey’s PoC, protection is provided for civilians living in Turkey’s northern areas of influence, but protection is not provided for Syrian-Kurdish civilians displaced during Turkey’s military operations. Both processes fall short on promoting PoC as a broader practice. Washington can both vitally fill a void in protecting those individuals at risk that are not included within the existing processes and set a precedent for promoting the protection of civilians at a normative level.

America’s Role in the Nontraditional Protection of Syrian Civilians

Before discussing how the United States will protect Syrians, Washington must critically assess its own limitations for civilian protection, determining which civilians it can actually protect and which it can only advocate for through multinational frameworks. To answer the former, two geographic considerations should be assessed: the United States military presence in northeast Syria and a second force presence in Al-Tanf, on Jordan’s border with Syria.

First, the United States maintains a military presence on the ground in the northeast and an operational influence via its partners, the SDF. The northeast currently houses hundreds of thousands of displaced Syrians who, during the expansion of and the subsequent war on ISIS, were forced to flee further north toward Kurdish-held territories in Syria. The United States has access to these populations and can easily organize humanitarian assistance, reconstruction assistance, and capacity-building programming to bolster civil society in these areas. More specifically, The United States and the SDF play a critical role in providing support for Syrian civilians within its operational reach.

The United States will likely continue training and equipping the SDF for the near future until substantial diplomatic ground has been covered toward both the defeat of ISIS in eastern Syria, the removal of Iranian-linked militias in Syria, and a political settlement. The SDF provides, perhaps, the best option for creating better security conditions for nearly 190,000 internally displaced people (IDPs) settled in informal camps in northeast Syria or the nearly 350,000 Syrians who returned to Raqqa and Deir ez-zor. The challenge, however, is that U.S.-SDF collaboration will undoubtedly cause friction with Turkey, who has cemented their presence in the north following the Idlib agreement to limit the influence of the Kurdish YPG militias operating with the SDF.