America Must Have a 'Regime Collapse' Strategic Goal for Iran 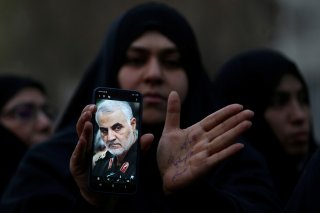 Indeed, America’s salutary killing of Suleimani marked the first direct U.S. military confrontation with Iran since 1988, and the first time the Trump administration added a military dimension to its “maximum pressure” policy against Iran. After long believing in U.S. fecklessness—encapsulated in Khamenei’s January 1 taunt that America “can’t do anything”— Tehran now fears military escalation with the United States. But how long that fear will last, and whether it will yield any benefit to the United States only time, and U.S. policy can tell.

Thus far, the administration’s strategy toward Iran has been admirable but muddled; its rhetoric remains unsteady. Unless the killing of Suleimani becomes a major inflection point in America’s approach toward Iran, the strategic benefits of this singularly gutsy action will soon ebb.

The administration should seize this moment to clarify and strengthen U.S. strategic goals and policy toward Iran, adopting a goal of “regime collapse” and pursuing it by avoiding negotiations on Iran’s nuclear program and embracing a policy of “comprehensive pressure.” This would include not just economic, but also military, diplomatic, political, and informational components. This new approach would be consistent with what the Trump administration appears to seek with Iran, as well as its intent to reduce American boots on the ground in the region.

Before January 3, U.S. goals toward Iran were unclear but its policy was rather consistent. There are arguably three main elements to U.S. considerations about Iran: 1) nuclear; 2) internal behavior, viz. treatment of its citizens, and 3) external behavior, viz. terrorism and regional expansion.

The Trump administration has been generally clear and consistent about the nuclear dimension. President Donald Trump declared on October 13, 2017, “we are determined [Iran] will never obtain nuclear weapons.” And on January 6, 2020, the President tweeted emphatically, “IRAN WILL NEVER HAVE A NUCLEAR WEAPON!” Sometimes the administration has drawn a stricter line, at nuclear capacity, such as when Secretary Pompeo declared at the JINSA dinner on October 10, 2018, that the administration seeks a “permanent solution to ensure that Iran never has the capacity to have a nuclear weapon for all time, in any form.” The administration has also been clear about what it would do if Iran rushed to develop nuclear weapons. In summer 2019, in response to Tehran’s steps away from the JCPOA, Trump stated “I'm not looking for war, and if there is, it'll be obliteration like you’ve never seen before. But I’m not looking to do that. But you can’t have a nuclear weapon.”

The Trump administration has also increasingly spoken up against Tehran’s repression of its own citizens. When widespread protests broke out around Iran in late 2017, Trump tweeted “The USA is watching very closely for human rights violations.” After renewed protests erupted in late 2019 and in the wake of demonstrations following the downed Ukrainian airliner in January 2020, he reiterated this warning, telling “the leaders of Iran – DO NOT KILL YOUR PROTESTORS. Thousands have already been killed or imprisoned by you….the USA is watching.” He offered support directly “to the brave, long-suffering people of Iran: I've stood with you since the beginning of my Presidency, and my administration will continue to stand with you.”

The administration has been less clear about its goals and policies toward Iran’s external activity. Its goal has basically boiled down to Iran acting like a “normal nation,” which Pompeo most recently repeated on January 13, and which also could apply to Tehran’s domestic behavior. But his immediate rejoinder, “Just be like Norway, right?”, which drew laughs, suggested, correctly, the unreality of this goal.

Nor is it clear that the administration is committed to making Iran behave like Norway, or significantly changing its behavior at all. The policy toward Iranian aggression and terror has been limited and focused on maintaining the status quo. In May 2018, Trump said America planned to “block” Iran’s “menacing activity across the Middle East. At the United Nations, in September 2018, Trump asked world leaders to “isolate Iran’s regime.” In May 2018 Pompeo stated that America aimed “to deter Iranian aggression,” and in June 2019 he again said, “We are there to deter aggression.” All these words—“block,” “deter,” “isolate”—accept the status quo of Iranian influence but resist its further expansion. That seems an unambitious objective, especially considering both the mounting pressures the Iranian regime is facing and Iran’s startling regional expansion in the years immediately preceding the Trump administration.

Until January 3, the administration’s policy tools had been limited to economic ones, despite the “maximum pressure” mantra. The sanctions-only policy had the virtue of insulating the administration from having to clearly define its policy objectives. Whatever it might want to accomplish, it can claim sanctions were instrumental, whether by pressuring the regime to negotiate, depriving it of resources for external aggression or heightening domestic Iranian dissatisfaction with the regime. Because the administration can claim sanctions accomplish all these things, it has not had to prioritize or be explicit about its goals. It could just sit back and see which affect the sanctions would have first.

To be sure, sanctions have meaningfully undercut Iranian resources and exacerbated internal tensions, but they are an indirect tool and alone are inadequate to fully address any of the administration’s purported concerns. In order to push back against U.S. sanctions and create its own form of leverage, the Iranian regime has systematically been ramping up its uranium enrichment program, in violation of JCPOA restrictions, bringing it closer to, not further from, nuclear weapons capability. Sanctions haven’t dislodged Iran from Iraq, Syria, Lebanon or Yemen. Moreover, as events since May 2019 illustrate, sanctions by themselves can provoke Iranian kinetic retaliation and nuclear aggression, but cannot deter or deny them. Nor has the regime’s treatment of its own people improved. To the contrary, public dissatisfaction, exacerbated by sanctions-imposed economic pressures, has been met with brutal violence.

With the killing of Suleimani, the administration added, for the first time, a military component to its “maximum pressure” campaign, implicitly acknowledging that economic sanctions alone are indeed insufficient. As senior Israeli defense officials told me, the targeted assassination of Suleimani was a “gamechanger.” Months of Iranian attacks against U.S. and allied assets, including the downing of the U.S. drone in June and the missile strike against the vital Saudi Abqaiq energy facility in September, surprisingly did not trigger a U.S. military reprisal. But, as these Israeli officials explained, Iran now understands that there are limits to U.S. patience, that the United States could eliminate vital Iranian assets at the time and place of its choosing. Certainly, Suleimani’s demise has changed the strategic landscape and upset Tehran’s confidence that it could easily deter Washington or even predict its response.

It is unclear, however, how long this landscape will remain changed. At a minimum, Tehran understands that there are redlines for its aggression against the United States—viz. the taking of American lives. However, there is a real risk that if the strike is left to speak for itself, Iran could well conclude that the administration continues to be reluctant to use force to protect other American interests, such as rolling back Iranian regional positions and protecting Saudi energy facilities. Indeed, Trump’s tweet following the Suleimani killing suggests as much: “Let this serve as a WARNING that if Iran strikes any Americans or American assets, we have targeted 52 Iranian sites….”

To build on the momentum generated by the strike against Suleimani, avoid Iranian misapprehension of U.S. resolve, and truly change the game in the Middle East, the United States needs both to sharpen and clarify its policy toward Iran by adopting the strategic goal of “regime collapse.”

The administration’s first effort to define its goals and policy in the wake of the Suleimani killing, Secretary Pompeo’s January 13 speech, did not do enough to clear up the muddle, even though parts of it were very strong. Here is a key passage:

“We put together a campaign of diplomatic isolation, economic pressure, and military deterrence. The goal is two-fold. First, we wanted to deprive the regime of resources, resources it needs to perpetrate its malign activity around the world. And second, we just want Iran to behave like a normal nation. Just be like Norway, right?  (Laughter.)”

The first stated goal is actually a means, not an end, and the second stated goal is vague. The latter merely repeats statements made by Secretary Pompeo prior to the Suleimani strike—reminiscent of the May 2018 speech listing a comprehensive set of twelve expectations for Iran—and does nothing to refine U.S. objectives or specify how they will be pursued in the new strategic landscape created by the administration’s audacious action.