America Must Solve The Gulf Cooperation Council’s Break With Qatar 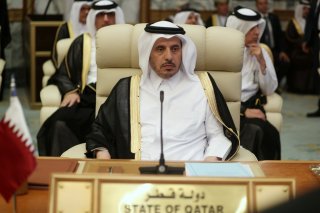 The ongoing feud between the members of the Gulf Cooperation Council (GCC), which marked its third anniversary this summer, is prolonging regional issues in the Middle East by hindering policy coordination. The rift between pro-Islamist Qatar and its Gulf neighbors is a result of the Arab Spring and has led to the formation of two opposing blocs that have left an already flawed GCC in a state of disarray. Ultimately, mediation by invested stakeholders can address the regional division underway between the GCC members. This approach can be adopted by the United States and its regional partners who have an interest in regional peace and can use their position to engage with various parties to end the divide.

A rivalry between pro-Islamist and authoritarian Gulf States stems back to the 2010 Arab Spring, a massive democracy movement that swept across the region. The outcome of this cataclysmic moment in Middle East and North Africa (MENA) politics resulted in long-time autocrats and monarchs shifting domestic and foreign policies toward subverting the Islamists behind such movements. In response, Qatar openly offered refuge for Islamists fleeing this subversion.

This scenario reached its pinnacle in June 2017, when Saudi Arabia, the United Arab Emirates (UAE), Bahrain, and Egypt abruptly cut ties and placed an embargo on Qatar, accusing it of supporting extremist Islamist groups across the MENA

Qatar rebukes these claims, describing them as a baseless attack on its sovereignty. This has resulted in a stalemate between two opposing blocs that consist of anti-Islamist Saudi Arabia, the UAE, Bahrain, and Egypt on one side, and pro-Islamist Qatar and Turkey on the other.

Relations are severely strained, particularly after the anti-Qatar bloc developed a list of demands that included the closure of the Al-Jazeera media network and a significant downgrade of diplomatic ties with Iran. The demands are viewed as a non-starter by most experts and have not been met by Qatar. Attempted reconciliation via diplomatic talks between the GCC fell apart almost immediately at the end of 2019.

This rift has hobbled the GCC's ability to operate as a forum for dialogue to address regional issues like COVID-19 and the various ongoing civil conflicts in places like Yemen. The nature of this feud is reflective of hardening geopolitical lines in the MENA region but can be repaired with the proper level of diplomatic engagement in the form of mediation.

Rather than support a misguided attack on Qatar for its failure to fall in-line with anti-democratic and hardline Gulf autocrats, the international community, and particularly the United States, should increase its engagement with the GCC members and apply diplomatic and economic pressure to end the rift. The United States, alongside Omani and Kuwaiti mediation efforts to end the dispute, can use their respective influence and diplomatic respect to pressure the Saudi-Emirati-Bahraini-Egyptian coalition to drop its unattainable list of demands in order to foster dialogue.

The United States holds sizeable influence in MENA affairs, specifically with the Gulf states that are top-10 U.S. weapons purchasers. In addition, these same states spend considerable funds lobbying Washington to support their national interests. The United States has also reflected a deep interest in addressing this issue, although its interest has been undermined by a lack of coherence under the current administration.

The United States is incentivized to play an active role in resolving the rift given the current administration’s interest in conformity within the GCC. Resolving the dispute would be a precursor to the development of the Middle East Strategic Alliance (MESA), a regional security alliance to counter Iran. Although a new administration will probably veer away from MESA, it should consider a similar approach in order to support a functional GCC, especially within the context of a wider MENA peace process that is likely to include an attempted revival of the Joint Comprehensive Plan of Action and negotiations with Iran.

However, a U.S.-led diplomatic coalition is only an initial step, as it should use its leverage to temper hostilities within the GCC. Beyond this, the GCC will still require structural reforms that can stem the reactionary politics designed to punish dissent within the body. This cannot be allowed to thrive, so a system should be created that will foster cooperation within the GCC that tempers temptations to corner neighbors and supposed allies.

Reforms that build trust and promote cooperation will be necessary, especially within a destabilizing coronavirus environment that has revealed significant weaknesses in economies and public health systems across the region. Events that produce systemic shocks tend to have a way of bringing together unlikely allies. This should be the linchpin of mediation efforts, as the current rift threatens to leave MENA states on their own in addressing the pandemic, which ironically works against Gulf state security and their sustained autocratic rule.

This simple irony is why coronavirus is the issue that can foster cooperation if outside actors engage the rift through diplomatic mediation. The GCC members are wealthy nations that traditionally support poorer MENA states with significant levels of financing across most government functions. While this has decreased recently due in part to decreased hydrocarbon prices, fear of the destabilizing effects of COVID-19 can promote cooperation that leads to the establishment of a coordinated aid system via the GCC.

This will not only benefit the GCC but MENA governments as well. States who require substantial amounts of foreign assistance to bolster their public health systems, governments, and economies, like Lebanon and the Palestinian Authority, are perfect examples of such a system's beneficiaries. More importantly, it incentivizes these governments to promote peace in neighboring states while also building trust within the GCC. The fear that drives the autocratic rulers of the region can operate as a catalyst for cooperation on an issue that fosters trust.

For now, the cost of inaction and diplomatic disputes will only result in further division between the two regional blocs, therefore further complicating the region’s political dynamics. The GCC, even with its flaws, is a significant stepping stone toward attaining sustainable resolutions on major issues. Without such a forum, the region will continue to suffer due to a lack of true cooperation between neighbors that can be fostered in a regional institution.