America's Actions in Iraq Could Create a Stronger Iran 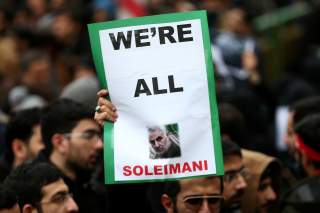 There is an important lesson in the way Iran has responded so far to the killing of Maj. Gen. Qassim Suleimani—it shows that the country has more respect for a show of force than diplomatic gestures, offers of deals, or sanctions. So far, Iran’s response to the assassination of Suleimani has been very disproportional. It fired missiles at U.S. bases at the time when most troops were asleep. Thus, its missiles, aimed at other parts of the bases, caused no casualties even though the country falsely announced to its citizens that there were many American casualties. Iran may take some more revenge, however, it has shown again and again in the past that it greatly respects the exercise of force.

Americans have seen this before. The United States defeated Saddam Hussein in 2003 (in a matter of weeks, with few casualties)—a feat Iran could not accomplish after fighting him for eight years. Washington’s experts seemed to believe that Iran was next in line. This thought process stemmed from the fact that Iran and North Korea were the only other nations openly placed alongside Iraq as states labeled “the axis of evil.” The mere threat of force led Iran to send urgent messages that it was keen to sit down with the United States to negotiate and, furthermore, that everything was on the table. The Bush administration deflected this overture because it sought regime change. Nevertheless, Iran stopped developing its nuclear weapons—until May 2005, which was the year it became evident that the United States was running into great difficulties in Iraq.

Now, as tension is increasing, the Iraqi parliament has asked that all foreign troops from Iraq but the U.S. military, despite an internal kerfuffle over an unsigned draft letter, maintains that it has no plans to remove its troops.

The same held true after Israeli forces repeatedly bombed Iran’s shipment of weapons, positions, and personnel in Syria. Iran barely responded although Israel made it easier on Iran by not acknowledging most of those strikes.

Many people have warned that the killing of Suleimani will lead to war with Iran, destabilize the Middle East, and bring about massive retaliation. These people should take a few things into account when they make predictions about the future. First, as a rule, when small powers face a strike by big ones, they mind their next steps carefully (and Iran, compared to the United States, is a small power). Second, in the Middle East, it is often true that the higher the rhetoric is, the smaller the action will be. Lastly, after decades of war, the United States is not the only nation that fears these types of confrontations.

Some people have asked about the strategy behind killing one general: As others have noted, Suleimani was hardly a run-of-the-mill general. Instead, he was the mastermind of major operations that killed six hundred Americans and he was planning more, even if not immediately. Surely, he was more dangerous than Osama bin Laden, who was hiding in a compound in Pakistan, barely able to communicate with his followers.

Iran will now rush to develop its nuclear weapons because it has learned—just like the North Koreans have learned—that it will be treated much more carefully once it has obtained a far more deadly deterrent. The question, hence, is what the United States will do next. If it assembles a larger force in the area and demands that Iran give up its military nuclear program, missile program, and support for terrorism but does not ask for regime change, then Iran will come to the negotiating table because it respects the threat of force. If the United States decides to rest on its laurels or offers to dine with Ayatollah Ali Khamenei to settle differences, or if it perhaps engages in some other policy zigzag, then that will embolden Iran. At that point, America may truly face the nightmare scenarios that did not materialize this time around.