America's Iraq War May Escalate After Airstrikes On Iranian-Backed Groups 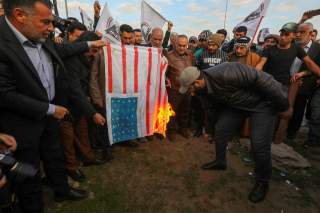 The PMU are at a crossroads after the U.S. strikes. They can choose to escalate the conflict and show that they are the new power behind the throne in Iraq, a sort of Iraqi version of Iran’s IRGC. Or Iran may seek to reduce tensions. Yet Iran will likely choose both options, as it has in the Gulf and in Syria. Trump has been reticent to commit more U.S. troops to foreign wars that he portrays as endless sunk costs. Iraq is a sunk cost in this estimation and Trump has said ISIS is defeated on the ground. That puts the United States in a complex position, wanting to maintain some presence in Iraq and southern Syria, but not wanting a large new conflict with Iran or Iran’s proxies. Five airstrikes were supposed to be a message of deterrence for the attack near Kirkuk. It shows the United States has been watching several Kataib Hezbollah’s sites for weeks or months. But Kataib Hezbollah didn’t evacuate its locations, assuming it was safe. This is the brinkmanship that could lead to a wider conflict. That conflict could stretch thousands of kilometers from the Gulf to Israel’s Golan Heights.