On the Anniversary of Iraq’s Uprising, Iran Still Kills With Impunity 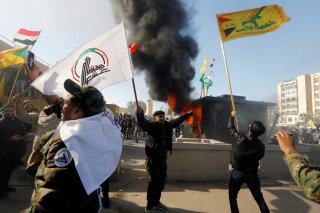 Although some of the underlying frustrations of Iraqi demonstrators have shifted in the last year, one element remains unchanged: Iran’s malign influence.

In October 2019, thousands of demonstrators took to the streets of Iraq demanding anti-corruption reform and limited foreign intervention in the country. One year later, with a new prime minister in place and hundreds of protesters killed, Iraqis are gathering in Baghdad’s Tahir Square to reflect on what these protests have accomplished. A year ago, demonstrators rallied around the call to terminate foreign interference in Iraqi polity, specifically from Iran. This year, more than anything, protestors want justice for the 600-plus activists who were slain participating in these demonstrations.

At the onset of protests last fall, over 200,000 Iraqis marched to revolt against Iran’s deeply entrenched leverage in the country. Tehran’s clout in the country extends through every sector of society—including its economic, political, and military spheres. Politically, Iran has attempted to infiltrate the Iraqi government by partnering with Shiite parties to create a weak federal state monopolized by Shiites and, therefore, agreeable to Iranian influence. Economically, Tehran persistently exploits Iraq’s financial sector for its own illicit activities. In March, the U.S. Department of the Treasury’s Office of Foreign Assets Control designated twenty front companies in Iraq that provide support to Iran’s Islamic Revolutionary Guards-Quds Force (IRGC) and Iran’s militias in Iraq, including Kataib Hezbollah.

Tehran supplements its political and economic hold in Iraq with well-funded and loyal militias under Iraq's Popular Mobilization Units (PMU). These Shiite militant proxies, including Kataib Hezbollah, have been used to provoke sectarian tensions and violently suppress anti-Iranian sentiment. In fact, these Iranian-supported groups are suspected of being responsible for the killing of hundreds of protestors in the last year. In November 2019, Iraqi security sources confirmed that leaders of Iran-backed groups decided on their own to help quell mass protests despite the lack of direction by Iraq’s chief commander of armed forces. Videos have circulated depicting PMU members using snipers to attack protesters, targeting those who are critical of Iran.

In addition to Iran’s unsolicited and deadly repression of the 2019 mass protests, Iranian-linked militias have been suspected of carrying out a series of targeted killings in recent months. Riham Yacoub, a staunch anti-Iranian activist, was gunned down in her car in late August. A week prior to her murder, Tahseen Osama, another anti-Iran activist, was killed in his business. Several other known activists survived assassination attempts in the same time frame. These attacks coincided with Prime Minister Mustafa Al-Kadhimi’s visit to the United States, which centered on limiting Iranian influence in Iraq.

While Prime Minister Kadhimi has been grappling with mounting pressure from protestors to arrest and prosecute those responsible for the killings of activists, Iranian militias have increased attacks targeting U.S. diplomatic sites in Baghdad’s fortified Green Zone. Since October, dozens of rocket attacks have targeted the U.S. Embassy and logistics convoys that supply American personnel. According to the Jerusalem Post, there have been at least thirty-four attacks on U.S. or foreign forces since July 2020 alone. It has been widely suspected that groups affiliated with Iranian proxies are behind these attacks. Radicalized offshoots of these militias, including Kataib Hezbollah, have embraced names that make them appear independent.

U.S. Secretary of State Mike Pompeo has warned Prime Minister Kadhimi that the Trump administration will close the U.S. embassy in Baghdad unless there is persistent action by the Iraqi government to end the rocket attacks.

In order for Kadhimi to stabilize the U.S.-Iraqi relationship and quell civil upheaval on the ground in Baghdad, Iran must be confronted head-on. Without effective countermeasures and sustained pressure, these militias will succeed in undermining the prime minister and increasing Iran’s footprint in the region.

Maya Carlin is an Analyst at the Washington D.C. based think-tank, the Center for Security Policy. She is an M.A. candidate in Counter-Terrorism and Homeland Security at IDC Herzliya’s Lauder School of Government in Israel.