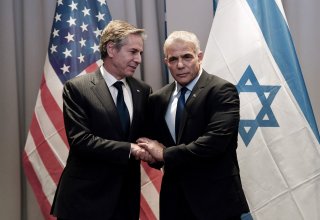 Secretary of State Antony Blinken visited Jerusalem over the weekend for discussions with his Israeli counterpart, foreign minister Yair Lapid, on America’s looming reimplementation of its nuclear agreement with Iran. Many in Tel Aviv have opposed a potential deal with Iran because of its provision of sanctions relief to Tehran.

While negotiations between Iran and the “P5+1” nations, including the United States, are still ongoing in Vienna, they are expected to pave the way for Iran’s return to the “Joint Comprehensive Plan of Action,” or JCPOA. That deal was originally negotiated in 2015; it temporarily exchanged Iran’s capacity to enrich uranium for an end to most international sanctions. Critics in Israel, including then-prime minister Benjamin Netanyahu, opposed the deal because it did not address Iran’s other outstanding issues with the West, including its advanced ballistic missile program and its material and financial support for Tehran-allied foreign militia groups such as Hezbollah in Lebanon.

While Netanyahu has been replaced in office by former protege Naftali Bennett, the new prime minister has echoed Israel’s previous complaints. During negotiations in Vienna, Bennett repeatedly argued that Tel Aviv was “not bound” by the nuclear deal—effectively meaning that it would continue to hinder Iran’s nuclear program and regional activities through other means, regardless of the outcome of the talks.

In his meeting with Blinken, Lapid also criticized the agreement for potentially resulting in the removal of the Islamic Revolutionary Guard Corps, or IRGC, from the U.S. list of terror organizations, where it was placed by then-President Donald Trump in 2019. It is unclear whether this de-listing will occur under the upcoming agreement or not.

Bilnken acknowledged to reporters at the meeting that the United States and Israel had “disagreements” about the accord, but insisted that its re-implementation was “the best way to put Iran’s program back in the box that it was in” prior to the withdrawal of the United States in 2018. Supporters of a deal with Iran have argued that Tehran is certain to acquire nuclear weapons without a diplomatic bargain, and such a bargain would inevitably require concessions such as sanctions relief in return for Iran’s willing suspension of nuclear enrichment.

During his visit to Jerusalem, Blinken also met with the foreign ministers of the United Arab Emirates, Bahrain, Morocco, and Egypt. All four of those Arab countries have recognized Israel. The UAE and Bahrain established relations with Tel Aviv after the August 2020 “Abraham Accords,” which were mediated by the United States and signed at the White House. Israel and the four Arab nations are scheduled to hold a summit in the Negev Desert later in the week.