America and Israel Have a ‘Plan B’ for Iran 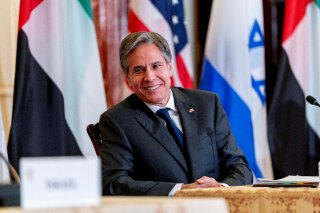 U.S. secretary of state Antony Blinken and Israeli foreign minister Yair Lapid announced Wednesday that the two nations would explore a “Plan B” for addressing Iran’s nuclear program if the Joint Comprehensive Plan of Action (JCPOA) negotiations in Vienna fail to produce an agreement.

Should Iran fail to return to the negotiations in good faith, the two officials suggested that America and Israel had “other options” for dealing with Tehran’s increasingly sophisticated nuclear program.

Neither Blinken nor Lapid specified what the “Plan B” would consist of, but both nations have demonstrated that they have a variety of tools that are not reliant on diplomacy, ranging from increased economic sanctions to cyberattacks to other covert actions. Although the Biden administration has placed an emphasis on returning to the deal and renegotiating an agreement with Iran through good-faith diplomacy, the existence of a second option could make it easier to achieve Washington’s aims through talks.

On the other hand, resorting to covert actions if talks fail would represent a setback for the Biden administration, indicating it could not achieve its aims through negotiations.

Although Blinken and Lapid’s remarks were not indicative of any wider policy shift in Washington or Tel Aviv, they implicitly acknowledged that the two governments had considered alternative approaches to diplomacy if the Vienna negotiations failed.

Israel has never been a party to the JCPOA, but as Iran’s main regional adversary, it has an abiding interest in constraining Tehran’s nuclear program. Former Prime Minister Benjamin Netanyahu emerged as one of the leading voices against the JCPOA; in the run-up to its 2015 approval, he vocally opposed the deal in his joint address to Congress, a speech that was derided by some commentators in the United States as a political stunt targeted at boosting his profile before a Knesset election two weeks later.

Although Prime Minister Naftali Bennett criticized the deal while he was in Netanyahu’s cabinet, he has so far avoided openly condemning it as prime minister.

The negotiations between Washington and Tehran in Vienna, though theoretically still in progress, have stalled. Iran has indicated its willingness to participate but has not provided a date. In the meantime, it has violated the JCPOA’s enrichment limits, prompting Blinken to argue that the window for Iran to rejoin the detail was closing—but he also did not provide a date.