Israel’s Diverse Coalition Government Gets Off to a Good Start 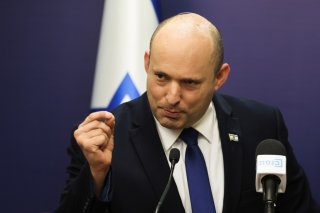 Israel’s current government, led by Prime Minister Naftali Bennett, is perhaps one of the most diverse governing coalitions in the world today. Comprised of eight factions that span the full spectrum of Israeli politics, from far-Left to Islamist to settler Right, it can endure only if its myriad component parts find their way to sustainable compromise.

Among the many contentious issues which the new government now faces, two, in particular, will test its ability to forge compromise across a fractured ideological landscape.

The first of the two is the fate of the recently established illegal outpost in Evyatar, a settlement outpost in the West Bank that was first established in 2013 and has since been destroyed several times by Israeli officials, who deemed it illegal, only to be re-established in May 2021. The outpost was scheduled for eviction on July 4.

The second challenge relates to the “family reunification” law — a proposal to extend legislation preventing Palestinians who marry Israelis from automatically getting citizenship.

With respect to the former challenge, the coalition’s Right-wing elements — Yamina, New Hope, and Yisrael Beytenu — will doubtless struggle to support the forced eviction of some 50 families who built an outpost in Evyatar in the aftermath of a May terrorist attack which claimed the life of Yehuda Guetta, a yeshiva student, at the nearby Tapuah crossroads.

As to the second issue, the coalition’s Left-wing elements — the United Arab List (Ra'am) and Meretz — will find it difficult to vote for the extension of the “family reunification law.” An 18-year-old statute passed at the height of the Second Intifada, its role in preventing the automatic extension of citizenship to Palestinians in the West Bank and Gaza (or residents of designated “enemy states” such as Syria, Iran, Iraq, and Lebanon) who marry Israeli citizens makes acquiescence to its extension politically untenable for Arab Members of the Knesset (MKs) and anathema to the Israeli Left.

And yet, despite all obstacles, this ideologically heterogeneous government has so far defied expectations. For starters, it has found a way to broker a tentative solution to the Evyatar impasse. Residents of Evyatar left the outpost without commotion on Friday, in exchange for a promise that the physical structures would be left intact.

According to the compromise agreement approved Thursday by Prime Minister Naftali Bennett and Minister of Defense Benny Gantz, the settlers will leave the outpost. Gantz, for his part, has directed the Israel Defense Forces (IDF) not to intervene directly and has insisted on a peaceful evacuation.

This marks an early success for the Bennett government. It both sends a strong message to the Palestinians and signals renewed commitment to the Biden administration which, one day before the Israeli government was formally sworn in, asked Gantz to ensure that the outpost was resolved. And so a solution was engineered, and Jerusalem's commitment to Washington was kept.

As for the family reunification law, a good deal more patience and flexibility are needed.

What does the pragmatism and flexibility of Israel’s strikingly diverse coalition government mean for the country and its allies? From Washington’s vantage point, the White House believes that the new Israeli government could set an example for other countries seeking to chart a course through truculent political crises. Americans themselves, after all, have been struggling to regain a sense of shared purpose after years of escalating polarization and hyper-partisanship. America’s divided politics have echoes in Europe, South America, and beyond.

The Biden administration should offer its full support to Israel’s novel experiment in coalition management, and do so with concrete measures. In Bennet, they may well find receptive ears. For all his reputation as a man of the far-Right, he bears even stronger cultural affinities for the U.S. than the average Israeli. He is a fluent English speaker, was raised by American parents, and partially educated in America. Though many are skeptical, there is reason to suspect he possesses a keen understanding of the Biden administration’s needs and political imperatives. Likewise, his coalition is buttressed by the likes of Benny Gantz, a veteran who commands considerable respect in the American establishment.

The electoral impasse in Jerusalem has hindered the consolidation of an effective working relationship between the American and Israeli heads of government for some time. An opportunity to end that impasse now stands before us; it should not go to waste.

Ahmed Charai is a Moroccan publisher. He is on the board of directors for the Atlantic Council, an international counselor of the Center for Strategic and International Studies, and a member of the Advisory Board of The Center for the National Interest in Washington and the global board of advisers of the Jerusalem Institute for Strategy and Security in Jerusalem.