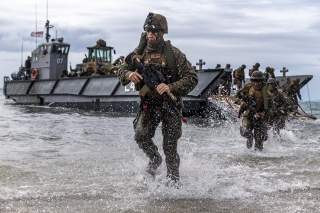 On July 19, the Islamic Revolutionary Guard Corps of Iran ordered a British oil tanker to change course and enter Iran’s territorial waters. The British tanker was escorted by a British frigate. An officer aboard the frigate addressed the Iranian marauders, calling, “Please confirm that you are not intending to violate international law by unlawfully attempting to board the MV Stena.” The Iranians ignored the plea and their Special Forces attacked the oil tanker and took control. The British warship, some sixty minutes away, did not give chase (though it was much faster than an oil tanker) nor call for assistance from a nearby U.S. war vessel. Sometimes such small vignettes speak volumes. This one illustrates the lame response by the West to Iran’s rising aggression.

Iran is suffering from sanctions imposed by the United States. For a year, it tried to get around them by calling on the European Union to find ways to circumvent these sanctions. When the EU did not come through, Iran recently decided to impose costs on the West in order to induce it to lift the sanctions. Iran carefully probed how far it could go in imposing “pain” on the West. Each time, after it did not face a counterpunch, it escalated some more. First, its forces planted mines on oil tankers, but above their waterline, so the tankers did not sink and there was no loss of life. Iran denies any involvement in this initial act. It then admitted that it shot down an American drone, but tried to argue that it was over Iranian territory. These aggressions led to a very weak Western response (mainly meaningless sanctions on Supreme Leader Ali Khamenei), so Iran escalated further, openly acknowledging that it is enriching its uranium and starting to interfere in the traffic in the Strait of Hormuz in earnest—to which the West responded with calls for de-escalation.

In general, I am not one of those who hold that God has anointed the United States to be the world police and impose values on other nations that it considers universal. However, I see great value in the thankless role Washington has taken on in aggressively enforcing the freedom of navigation all over the world. For seven decades, whenever a nation—friend or foe—set some kind of limit on navigation in what the United States considered international waters, the Washington has sent one of its naval vessels to violate that restriction, and has regularly publicized such “Freedom of Navigation Assertions” to show that it will not brook any limitations on that right. Among those so schooled were not just China, but also nations such as Peru and Canada. The extent of the Trump administration’s departure from this long-established policy is highlighted by Secretary of State Mike Pompeo’s statement that “[t]he responsibility…falls to the United Kingdom to take care of their ships.”

The way the Trump administration is explaining its lack of response is telling. It argues that Tehran is seeking a military confrontation, but the United States will not fall into such a trap, and, by not reacting to Iran’s provocations, it is frustrating its designs. David Ignatius, who has good sources in the Pentagon, reports that “Iran’s biggest frustration right now may be that despite its escalating tactics in the Persian Gulf, the U.S. military is refusing to be provoked – denying Tehran, for now, the showdown it seems to want.” He quotes Gen. Kenneth F. McKenzie Jr., the U.S. Central Command commander, as explaining: “… merely because they’re being irresponsible, we shouldn’t fall into the trap of some form of overreaction. So our response is going to be very calm, taken in concert with the international community.” Fine lines for a power reluctant to engage.

First Trump took military options off the table. After its oil tanker was seized, UK Foreign Secretary Jeremy Hunt “tweeted that Britain sought to ‘de-escalate’ the situation.” He elaborated to a Sky News reporter, saying, “We are not looking at military options. We are looking at a diplomatic way to resolve the situation.” One may well hold that military action is not called for, but, by declaring it upfront, one in fact reduces the chances that diplomacy will succeed.

Diplomacy may well resolve the immediate crisis by the time these lines are published. Maybe the UK will let Iran’s oil tanker held in Gibraltar take off as long as it claims not to be headed to Syria, and Iran may then release the UK tanker as long as it claims, say, not to sail to Haifa. However, the underlying situation will remain: Iran is chafing under the pressure of sanctions; it hence must be expected to continue seeking to increase the costs and pain of those who impose these sanctions. (And it may well continue attempting to keep the EU from aligning with the United States by offering to negotiate—on terms Washington will view as completely unacceptable).

If its current level of provocations will not do the job, and is met with little effective response, the logic of the situation calls on Iran to escalate. Indeed, since these lines have been written, test-fired a missile. The United States can stop these acts if it yields and lifts the sanctions. However, if the United States is not willing to countenance an Iran bent on gaining nuclear weapons and long-range missiles, as well as using its resources to support terrorism throughout the region as it increasingly gains dominance, the United States will have to respond forcefully to Iran’s provocations.

Amitai Etzioni is a University Professor and professor of international affairs at George Washington University. His next book, Reclaiming Patriotism, will be published by the University of Virginia Press on September 10.