Are Afghan Elites Ready for an Afghanistan Without America? 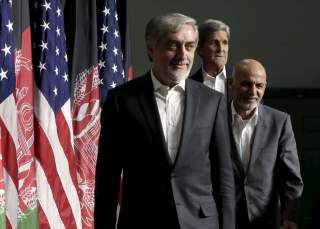 An unwinnable war is now a potential opportunity for diplomatic victory. That is what President Donald Trump, U.S. Special Representative Ambassador Zalmay Khalilzad, and Khalilzad’s team have achieved with the help of Qatar and Pakistan through Saturday’s accord with the Taliban.

The U.S.-Taliban agreement is no peace deal. At its core, it exchanges a full U.S. military withdrawal for Taliban counterterrorism guarantees. But it does more than that. It includes a Taliban commitment, in exchange for the release of some five thousand prisoners, to participate in a political dialogue with other Afghan leaders, including those from President Ashraf Ghani’s government, on their country’s future. And in doing so, the agreement forged by Khalilzad and lead Taliban negotiator, Mullah Abdul Ghani Baradar, provides a real pathway to responsibly end America’s longest war and the broader forty-year Afghan civil war.

On Saturday, an emotional Secretary of State Mike Pompeo underscored the historic opportunity before Afghan leaders, stating that they must not fail to seize it. He implored them to think beyond their personal interests.

The ball is now in the court of Afghanistan’s leaders. The Taliban appear to have implicitly consented to Ghani playing a lead role in forming the committee of Afghans with whom they will negotiate. But Ghani, unfortunately, has not changed his stripes. His priority remains staying in power by any means, even if that requires upending the peace process.

On Sunday, Chief Executive Abdullah Abdullah accused Ghani of trying to monopolize the intra-Afghan process. Abdullah has endured almost six years of a miserable arranged marriage with Ghani, who has largely disregarded their power-sharing arrangement, which was brokered by then-Secretary of State John Kerry.

Abdullah and Ghani faced off again in September’s presidential elections. After a four-month impasse, the Afghan election commission, stacked with Ghani loyalists, declared Ghani the victor. The election commission failed to conduct an audit on three hundred thousand disputed votes mandated by the complaints commission. Yet another election was stolen from Abdullah by Ghani.

Ghani wants to be inaugurated as president once again on March 9—the day before the intra-Afghan talks are scheduled to begin. Through this game of brinksmanship, Ghani aims to leverage America’s desperation for the talks to succeed and gain its approval for his second term.

For Ghani, the intra-Afghan talks are not a means toward resolving this conflict. He is using them to project his authority, though neither the Taliban nor his elections rivals regard his presidency as legitimate.

This weekend, Abdullah complained that Ghani has been monopolizing the process of determining which Afghan figures will sit on the opposite side of the table with the Taliban later this month. And Ghani also refuses to release the five thousand Taliban prisoners before the March 10 talks as mentioned in the U.S.-Taliban accord. But the Taliban have said that they will not participate in the intra-Afghan talks unless those prisoners are released.

America must be firm with Ghani. The clock is ticking. Ghani, bizarrely, claims that Trump “congratulated” him on the agreement signed on Saturday, though the Afghan government is not a signatory and did not even attend the ceremony. The White House has not yet released a readout of the call. One can only hope that Trump, in reality, read Ghani the riot act. There is indication from the administration that Ghani’s time is up and that once the intra-Afghan process gets rolling, his presidency will be replaced by an interim arrangement including the Taliban.

The intra-Afghan process will be rocky and long; leaders of Afghanistan, both Taliban and non-Taliban, have less than fourteen months to get it right. The process must be inclusive. It cannot amount to a mere intra-Pashtun reconciliation. The desire of non-Pashtuns for decentralization must also be addressed. The Taliban’s hegemonic impulses must be restrained. A statement released on Saturday by Taliban leader Hibatullah Akhundzada strikes a conciliatory tone. Akhundzada called on his fellow Afghans to work together and “find a solution to our problems in light of the religious and national values of our people.”

Peace will come when the Afghans decide they will stop fighting amongst themselves. But what Khalilzad was able to achieve on Saturday was no easy feat. The effort to end the Afghan war has lasted more than half of the entire war’s duration. American officials first held secret talks with Mullah Omar aide Tayyib Agha on November 28, 2010.

The Obama administration eventually began a meaningful exploratory process with the Taliban. But its many outreach efforts eventually failed.

Trump was wise to select Khalilzad—an American of Afghan origin uniquely capable of completing this weighty task—and give him both a clear mandate and his full backing. Khalilzad was able to not only overcome spoilers in Afghanistan and nearby, but also America’s own wily generals and allied politicians, who are adept at playing the media game and helped upend Obama’s efforts to end the war.

Khalilzad succeeded where his Obama administration predecessors failed also because his team dropped prerequisites, though it cleverly rolled some back in as confidence-building measures. A ceasefire was rebranded as a “reduction in violence” agreement.

Khalilzad also came to terms with the reality of the need to bring regional states—namely, China, Pakistan, and Russia—on board, instead of working at odds with them.

And above all, he and Trump abandoned the fantasy that a resilient Taliban would somehow agree to an indefinite U.S. military presence after more than 18 years of fighting.

Khalilzad has much more work ahead of him. His mandate has expanded beyond negotiating a withdrawal agreement with the Taliban. He must now broker a broader peace among Afghans. And to do so, he should tell Ashraf Ghani that it’s time to go.