Attacks on U.S. Troops in Iraq Are Part of Iran's Strategy 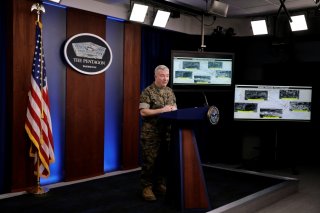 The United States Central Command (CENTCOM) announced on September 9 that it would formally withdraw 2,200 troops in Iraq. The decision will bring the number of troops deployed from 5,200 to 3,000. According to the CENTCOM commander Gen. Kenneth “Frank” McKenzie the decision comes due to “the great progress the Iraqi forces have made and in consultation and coordination with the government of Iraq and our coalition partners.”

While the drawdown announcement does not sound like something new, the timing could be quite considerable. Indeed, the decision comes a few weeks after Iraqi prime minister Mustafa al-Kadhimi paid a visit in Washington to discuss bilateral security and economic relations with U.S. president Donald Trump, in the light of the Islamic State’s (ISIS) reduction to disbanded cells. But the announcement also follows the U.S.-led coalition troops’ departure from Iraqi’s Taji military base on August 23, which marked the eighth military base to be handed over by U.S. troops to the Iraqi military.

The U.S. withdrawal from Iraq and the handover of military bases to the Iraqi troops stem from both domestic and international reasons. At the domestic level, the Trump administration is willing to reduce its military footprint in the Middle East to gain some leverage within its electoral base, due to the upcoming presidential elections. By doing so, President Trump is likely seeking to show that he is “bringing troops home” as he also mentioned during his nomination speech. Otherwise, given that ISIS has been reduced to a few scattered cells within Iraqi territory, should the U.S. administration continue to keep a large military presence in the country, it may turn out to be politically costly for the Trump administration. Besides, this underscores efforts by the administration to support al-Kadhimi and his commitment to restoring Iraq’s sovereignty.

At the international level, the recent surge in attacks against U.S. convoys and military bases by Iran-aligned militias in Iraq can be not overlooked. The spike in attacks had started in the aftermath of the U.S.-drone strike that killed Iranian Major General Qasem Soleimani of Iran's Islamic Revolutionary Guard Corps and the deputy chief of the Popular Mobilization Forces—an Iran-aligned umbrella organization mainly composed by Shia militias that is also officially part of Iraq’s security forces—at the beginning of January 2020.

The attacks grew dramatically over the months, especially between March 11 and August 18, with at least four attacks on convoys and up to twenty-eight attacks reported on bases housing U.S. forces, increasing further to almost daily occurrences in mid-August. With the spike in attacks steadily rising, several militant groups emerged to claim responsibility: Usbat al-Thairen in March, Ashab al-Kahf in July, and then the Saraya Thawrat Al-Eshreen Al-Thaniya. Regardless of the liability—sometimes totally absent—both the improvised explosive device (IED) and rockets’ attacks have been attributed to Iran-backed militias. This surge in targeting U.S. interests in Iraq is part of a clear strategy of Tehran to step up pressure on U.S. troops to force them out of the country and take credit for the withdrawal. Indeed, while frequently and directly targeting U.S. personnel and bases throughout the country, all the attacks rarely injured or killed U.S. soldiers. This further highlights how the main goal is trying to avoid any direct escalation in violence, while still maintaining an amount of pressure to show the door to the United States.

Therefore, while considerably reducing its military footprint within Iraq, further attacks against U.S. troops and interests in the country will likely continue to take place in the short term. Indeed, as Secretary of State Mike Pompeo said, Washington is “committed to supporting Iraq’s security forces, including through the NATO Mission and the Global Coalition to Defeat ISIS, to curb the power of militias.” Even more, consider that curtailing militias’ power would also imply to reduce Tehran’s influence within the country.

However, a potential watershed could be represented by the U.S. presidential election next November. If President Trump should not be re-elected, the victory of the democratic candidate Joe Biden may lay the groundwork for a change in the U.S.-Iran relations, by also easing tensions within Iraq.

Giuseppe Maria De Rosa is a Regional Security Analyst for Le Beck, a geopolitical security consultancy based in the Middle East.