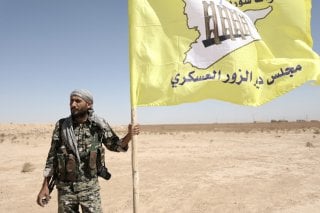 Similarly, a recent decision by the Raqqa Civil Council to outlaw the public consumption of alcohol illustrates the devolved Council’s ability to take its own decisions, even in opposition to the AANES’s secular political program. The ruling was positively received by local tribal actors who had been lobbying the Council to take such a step.

It has become something of a truism that the majority-Arab regions suffer from AANES domination, but it is in these regions where civil-society pressure has recently created concrete changes to regional AANES policy. Deep suspicion toward Damascus gives the AANES the time and space to keep building trust—in terms of both short-term alliances with local tribes and political stakeholders, and longer-term efforts to win the population over to its political vision.

Whether the AANES will be able to translate its de facto legitimacy to de jure autonomy at the negotiating-table remains to be seen and depends to a large extent on the duration and nature of a future Joe Biden administration’s commitment to the NES. Public suspicion toward Russia and Damascus means a window remains open for the United States to win back local support through concrete policy commitments and stabilization efforts. But it is only a matter of time until the next Turkish operation, and if the United States cannot prove a renewed commitment to NES today, it can expect a further regional lurch toward Russia and Damascus tomorrow.

Conversely, if the AANES and SDF are able to keep on ensuring a reasonably calm security environment, rolling out service provision and incorporating local opinions into their decision-making—supported where possible by their Coalition partners—Damascus will find it hard to achieve a peaceful reconquista of Raqqa, Manbij or Deir-ez-Zor, despite the presence of SAA troops down the road.

Thomas McClure is a researcher with the Rojava Information Center, the top news and research organization in North and East Syria. RIC helps leading international newspapers, TV channels, and human rights organizations to cover the situation in NES.