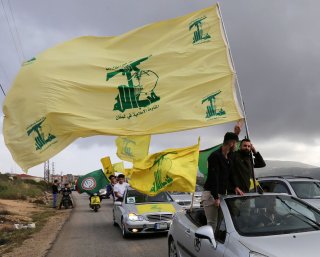 We may never know exactly why a huge stockpile of ammonium nitrate sat dangerously at Beirut’s port for years, but the explosion that killed nearly 200, injured thousands, and left 300,000 homeless highlights the malignant influence of Hezbollah within a dysfunctional government and across Lebanese society.

The tragedy reminds us that Lebanon will never have a well-functioning government with the terrorist group in it, that the nation can never count on peace as long as Hezbollah preps for its next war with Israel across Lebanon’s southern border, and that global financial institutions and other would-be donors will continue to shun Lebanon due to Hezbollah’s illicit activities. It also reminds us that, for the region and world, much rides on the fate of Hezbollah’s sponsor, the radical regime in Iran, which arms and funds Hezbollah and other terrorist groups to expand its footprint beyond its borders.

That Hezbollah wields so much power in Beirut is partly a function of Lebanon’s governing structure and partly of its own designs. In Beirut—where a president, prime minister, and parliament preside—the constitution disburses proportional power among Christians, Sunni and Shiite Muslims, and other religious groups. By tradition, the president is a Christian, the prime minister a Sunni, and the parliamentary speaker a Shiite.

With every sect in charge, but only somewhat, no group is fully accountable for Beirut’s endemic corruption and mismanagement—and for what’s now become Lebanon’s worst economic crisis in memory, complete with a deep recession, soaring inflation, rising unemployment, widespread poverty and famine, an insolvent banking system, and a government now defaulting on its foreign borrowing. Nor, with power disbursed this way, could any government in Beirut (if it wanted to) dislodge Hezbollah, which is not only the nation’s most powerful political party but also a military force with thousands of fighters and a massive weapons arsenal. That has enabled Hezbollah, through drug smuggling and other illicit activities, to capture $500 million to $1 billion a year from Lebanon’s economy.

To be sure, Hezbollah didn’t necessarily direct Lebanon’s government back in 2013 to seize the explosive chemicals from a Moldovan-flagged ship that stopped in Beirut on its way to Mozambique, nor to store them at a port warehouse. But Hezbollah, which wields great influence over the port, almost surely knew the chemicals were there and did nothing to move them—even though its allies control the Transportation Ministry (which has jurisdiction over all Lebanese ports) and the Finance Ministry (with jurisdiction over the Customs Authority). In fact, the group did nothing even though customs officials repeatedly sought guidance from the government on moving the materials to a safer place, and even though security officials warned the government as recently as last month that the materials could destroy the city if they exploded.

Hezbollah knew full well the risks that 2,750 tons of ammonium nitrate posed for Beirut’s waterfront and beyond because the group has used such material in its military operations and has sought much more of it. Hezbollah was reportedly behind the 2012 attack on a bus of Israeli tourists in Bulgaria that killed five people, the 1994 attack on a Jewish center in Buenos Aires that killed eighty-five, and the 1992 bombing of Israel’s embassy in Buenos Aires that killed twenty-nine—each of which involved ammonium nitrate. This past spring, Israel’s Channel 12 has reported, Israeli intelligence told Germany’s government that Hezbollah was storing hundreds of kilograms of ammonium nitrate in that country, which helped prompt Berlin to ban both the group’s military and political wings as a “Shiite terrorist organization.” In previous years, Hezbollah operatives in Great Britain, Cyprus, and Thailand were each caught storing tons of the material.

Hezbollah’s influence over Beirut, its ties to the port, and its fondness for the chemicals highlight its nefarious role in Lebanon, and how life in this tortured country might improve if Hezbollah lost its funding from Tehran.

Lawrence J. Haas, a senior fellow at the American Foreign Policy Council, is the author of, most recently, Harry and Arthur: Truman, Vandenberg, and the Partnership That Created the Free World.