Beyond Suez: How Yemen’s War Can Imperil Red Sea Shipping 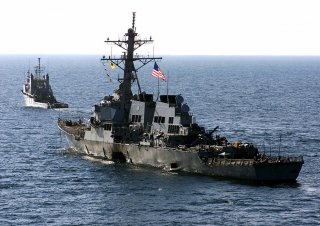 The windstorm that sent the 200,000 ton Ever Given container ship into the banks of the Suez Canal cost global markets billions of dollars. Years of miscalculations in Yemen and the ongoing civil war have the potential to threaten access to the Suez Canal and exact a far greater economic toll over a longer period of time. At the mouth of the Red Sea Bab al-Mandeb Strait, located 1,400 miles to the south of the Ever Given, is the effective exterior gates of the Suez Canal. Only eighteen miles wide at its narrowest point, Bab al-Mandeb is the fourth busiest waterway in the world, connecting the Indian Ocean to the Red Sea. A major waterway can either be a great blessing or a great curse as foreign powers compete over access and control, constituting a self-fulfilling prophecy of instability in Yemen, which lacks the capability to overcome global machinations and capitalize on the lucrative transit point for so much of the world’s commerce and oil. The ensuing arena of competing powers and interests has undermined decades of Yemeni central governance leading to a worrisome fragmentation and to an ongoing armed conflict and refugee crisis that threatens to undermine the global economy.

Following the outbreak of hostilities in 2014 and the seizure of Yemen’s capital city of Sana’a by Houthi tribesmen, foreign policy experts had begun to raise the alarm at the potential for an Iranian-backed militia to disrupt maritime traffic by targeting Red Sea vessels. Periodic low-level attacks, the firing of sea-bound missiles, and the seizure of ships only managed to exacerbate these fears. In 2015, Houthi forces occupied Perim Island, located in the middle of Bab al-Mandeb, declaring to the world their intention of exercising Yemeni sovereignty over the strait and deriving subsequent political and economic benefits.

One of the first targets of coalition forces led by Saudi Arabia and the United Arab Emirates in October 2015 was indeed Perim Island, depriving the Houthis of a symbolic asset and securing a strategic trade route. The island has since become a forward military and airbase for anti-Houthi forces, reminiscent of 150 years of upheaval that has characterized Perim Island and Yemen’s relationship with Bab al-Mandeb.

From the moment the Suez Canal was opened in 1869, British colonial authorities in the southern Yemeni port of Aden designated Perim as the physical and figurative lighthouse watching over the Red Sea, the Suez Canal, and the route connecting British ports to the colonial riches of India. When South Yemen gained independence from the British Empire in 1967, becoming the Arab world’s first and only communist state, Perim Island was transformed into a strategic Soviet-satellite military outpost set in between Africa and Arabia. During the 1970s, the island was a recurrent source of Red Sea instability. In 1971, Palestinian guerillas based on Perim launched an attack on an Israeli tanker entering the Red Sea. Two years later, during the October 1973 War, Egyptian naval forces stationed on the island blockaded Bab al-Mandeb against Israeli shipping.

The relative lawlessness around Bab al-Mandeb during this period was due to the closing of the Suez Canal from June 1967 until June 1975. The impact of the 1967 closing did not, however, have a significant economic effect, because the shipping plans of global companies had been altered following a much shorter six-month closing following the 1956 Sinai War. Policymakers and oil executives reduced their reliance on the canal, instead of developing larger and more versatile fleets that could transport oil and goods around the Cape of Good Hope at less than the cost of a smaller ship traversing the Suez Canal. In 1956, 60 percent of British supplies were shipped through the canal. By 1966 this number had dropped to 25 percent. In the aftermath of the June 1967 closing of the canal, seaborne transportation embarked on a new era of the super-tanker, dropping the international maritime trade flowing through the Suez Canal from 15 percent in 1967 to 8 percent in 2020. By the time the Suez Canal reopened in 1975, most of the oil tankers were simply too large to fit through the Suez Canal.

The relative decline in the Suez Canal’s importance in the decades since have allowed, by default, greater levels of autonomy for Yemeni governments as Bab al-Mandeb was no longer deemed a strategic necessity by global powers. During this period of several decades, north and south Yemen entered into a unification agreement, forming the Republic of Yemen with relatively little foreign intervention. In 2014, however, Mohab Mamish, the Chairman of the Suez Canal Authority, inaugurated the canal expansion project which would be completed one year later. When not blocked by beached ships, the newly expanded canal can now accommodate two-way traffic, larger vessels, a greater number of them, and increased container capacity. Construction was ongoing at precisely the same time that Houthi militias were taking over Perim Island and threatening the Bab al-Mandeb. The expanded canal elevated the importance of the strait and the political situation in Yemen, inviting, once again, a new era of foreign intervention to secure the Yemeni gates to the Suez Canal.

If this past week’s blockage of the Suez Canal is any indication, a major conflagration in Yemen has the capacity to threaten the freedom of navigation through the Red Sea and have serious ramifications for Suez Canal finances and global commerce in the long-term. A narrow focus on the Suez Canal misses the larger picture of the Red Sea region.

Asher Orkaby is an Associate Research Scholar at Princeton University’s Transregional Institute and a Fellow at the Woodrow Wilson International Center for Scholars.