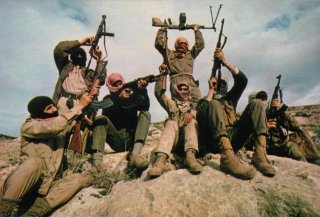 “Throughout history,” Henry Kissinger observed, “the boundaries in the Middle East have moved with the shifting sands.” The former U.S. Secretary of State was writing about the so-called “Black September” crisis which unfolded fifty years ago this month when Palestinian terrorists attempted to take over Jordan. While often forgotten today, the events of half a century ago forever changed both U.S.-Israel relations and the Middle East itself.

The crisis had its roots in the 1967 Six-Day War, in which Israel defeated the Arab armies of Egypt, Syria, and Jordan. Israel’s stunning victory largely repudiated the pan-Arab nationalism embodied by Egyptian ruler Gamal Abdel Nasser and led to growing support for Palestinian groups like the Palestine Liberation Organization (PLO) and the Fatah movement led by Yasser Arafat.

In the war’s wake, weakened Arab rulers sought to bolster their flagging popularity by increasing aid to Fatah and the PLO. Nasser supported Fatah leader Arafat in his bid to take over the PLO, which served as an umbrella group for various Palestinian factions. In November 1969, the charismatic Egyptian leader pressured the Lebanese government to allow the PLO to use Lebanon as a launching pad for terrorist attacks against Israel.

In Jordan, a similar situation was developing. The country’s king, Hussein bin Talal, had reluctantly joined Nasser in his plans to destroy the Jewish state. Hussein ignored pleas from Israeli leaders to refrain from aiding Nasser and, in so doing, he lost eastern Jerusalem and the West Bank (Judea and Samaria), both of which Jordan had controlled since Israel’s 1948 War of Independence.

Hussein’s hold on power was tenuous. His family, the Hashemite dynasty, wasn’t from the area, hailing instead from what is today Saudi Arabia and the Gulf. In 1921, the British created the Emirate of Transjordan and put a Hashemite ruler, Abdullah, on its throne—a reward for the family’s decision to support the British in WWI, but also to pacify them.

The Kingdom of Jordan, as it would be known after the 1948 War, was ruled by a monarchy viewed by many citizens, as well as many of its neighbors, as both foreign and a British puppet. Others resented Abdullah’s known contacts with Israeli officials. Some, like the Palestinian Arab leader Amin al-Husseini, coveted his kingdom. In 1951, Abdullah was murdered in front of his sixteen-year-old grandson, the future King Hussein, by assassins linked to al-Husseini. A year later, Hussein’s father was forced out of power, and Hussein found himself ruling over a kingdom whose future looked increasingly uncertain.

In 1958, the Hashemite rulers of another British-created state, Iraq, were overthrown and murdered in a bloody coup orchestrated by anti-Western Arab nationalists. Hussein was keenly aware of the threat to his crown, titling his 1962 memoirs Uneasy Lies the Head.

Hussein wasn’t the only one worrying. With the coup in Iraq and the rise of Soviet-backed rulers like Egypt’s Nasser, Jordan was one of the few Arab countries viewed as pro-United States. The Hashemite Kingdom and its young king were considered by many Western policymakers as bulwarks against further Soviet expansion in the Middle East.

Jordan’s loss in 1967 added to the king’s precarious situation. “At first,” the late historian Barry Rubin observed, “King Hussein remained quite popular.” But soon “this changed drastically as the PLO gained support” and its leader “Arafat quickly became the monarch’s rival.” Just as in Lebanon, the Soviet-equipped PLO soon made Jordan into a base for attacks against Israel, resulting in firefights between Israeli Defense Forces (IDF) and the Jordanian army.

“Whenever Hussein warned that he would crack down, Arafat threatened force,” Rubin noted in his 2003 biography of the PLO terrorist, “and the king quickly retreated.” Arafat had promised to coordinate his attacks with Jordan’s army only to ignore his pledge, thus “putting the country at risk of a full-scale war with its stronger neighbor.”

Hussein was well aware that the PLO chieftain intended to undermine the monarchy and that Arafat’s patrons, Egypt and Syria, sought control over Jordan, yet “given foreign Arab pressure and many of his own people’s views, the king was reluctant” to challenge him, Rubin noted. Adding to the king’s concerns: Arafat had supporters among the Jordanian opposition and in the nation’s military and intelligence services.

The PLO was setting up a “state within a state” in Jordan, even having their own police that set up roadblocks, barred entry to Jordanian troops, and held demonstrations.

In November 1969, clashes erupted between Jordan’s army and the PLO. Low-level fighting went on intermittently for months with Hussein still desperate to avoid a full-on confrontation. The king even sought to placate Arafat by offering him a government post, which he refused.

On Sept. 1, 1970, shots were fired at Hussein’s motorcade. Five days later, Palestinian terrorists hijacked three airplanes, two American and one Swiss. They took one to Egypt and the other two to an abandoned airfield in Amman. Arafat refused to condemn the act, instead demanding a unity government. Hussein, belatedly, chose to act, deploying his troops to crush Arafat and his supporters.

The PLO, in turn, called for the king’s overthrow. Pitched battles erupted on Jordan’s streets as a worried United States watched from afar.

Three months earlier, with reports of PLO attacks on U.S. citizens reaching the White House, the Nixon administration had considered sending troops to “prop up Hussein and counter the threat of a Soviet-sponsored Syrian-Iraqi intervention,” according to historian Robert Dallek. After the plane hijackings in September, Secretary of Defense Melvin Laird began deploying some American military resources to the region.

With American credibility at stake but U.S. forces largely preoccupied with Vietnam, the White House had few good options. Although Nixon reportedly considered a bombing raid, the consensus was that direct U.S. action was undesirable.

Worse still, on September 19, elements of the Syrian military crossed Jordan’s northern border to assist the PLO fighters—confirming the U.S. government’s worst fears. The United States decided to make a revolutionary decision and turned to Israel for help.

It is a common, albeit false, assumption that the United States and Israel closely cooperated since the Jewish state’s recreation in 1948. Washington had supported the U.N. Partition Plan that would have created both an Arab and a Jewish state out of British-ruled Mandate Palestine, but then-President Harry Truman did so over the objections of top advisers. Indeed, the U.S. State Department and the Pentagon had argued that U.S. support for Israel would be a strategic liability.

America, in turn, often kept Israel at arm’s length, both forcing the Jewish state to give up territory won in the 1956 Suez War against Nasser and prohibiting weapon sales until 1962. While relations were cordial, and even friendly, the United States tended to view Israel less as a strategic partner and more as a burden.

On September 20, Kissinger told Israel’s Ambassador to the United States, the future Prime Minister Yitzhak Rabin, that King Hussein had asked to have Israel’s air force attack the Syrian invaders. A stunned Rabin asked, “Are you recommending that we respond to the Jordanian request?” Kissinger declined to give an answer, telling Rabin that he would get a response from Nixon within half an hour.

After speaking with Nixon, Kissinger told Israeli Premier Golda Meir, that the United States “would look favorably upon an Israeli air attack.”

Meir ordered the reconnaissance flights and Israel sent troops to its border with Syria. Israeli jets, meanwhile, flew low over Syrian tanks in Jordan—sending an unmistakable signal that Israel would intervene. “With that support,” Meir biographer Francine Klagsbrun wrote, “the king used his own air and ground forces to drive the Syrians back to their own country.” By July 1971 the PLO was crushed in Jordan, and Arafat fled to Lebanon.

Subsequently, Kissinger told Rabin that America was “fortunate in having an ally like Israel in the Middle East.”

Security cooperation would continue to improve between the two countries with Israel having demonstrated that it was more of an asset than a liability. Today, the nations enjoy unprecedented cooperation and Israel is considered a major non-NATO ally.

The event had other fateful consequences as well. The failed Syrian intervention led to the rise of Hafez al-Assad who, as defense minister, had opposed it. The PLO, meanwhile, would memorialize it as “Black September” and would go on to create another “state within a state” in Lebanon—igniting years more of warfare. Today another anti-Israel terror group, Hezbollah, has taken the PLO’s place in Lebanon. Elsewhere, Hezbollah has intervened in Syria to prop up Bashar Assad, Hafez’s genocidal son.

“History is not was,” the American novelist William Faulkner famously wrote, “it is.”

Sean Durns is a Senior Research Analyst for the Washington D.C. office of the Committee for Accuracy in Middle East Reporting and Analysis.