Can Donald Trump Avoid a War with Iran? History Tells Us To Worry. 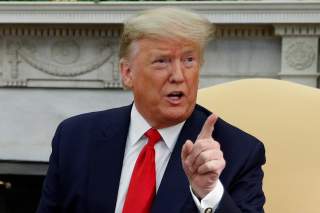 Even though the current situation with Iran is the most dangerous threat facing the United States at this time, in his State of the Union Address on February 5, 2020, President Trump made only two conflicting references to it. In one part he seemed to offer an olive branch when he said, “The Iranian regime must abandon its pursuit of weapons of mass destruction and needs to work for the good of its own people.  Because of our powerful sanctions the Iranian economy is doing very poorly.  We can help them make it a very good and short recovery. It can all go quickly – let’s see which way they choose. It is totally up to them.”

But the president also threatened them when he said that, “Last month, at my direction, the United States Military executed a flawless precision strike that killed (Iranian Major General) Soleimani and terminated his evil reign of terror forever. Our message to the terrorists is clear. You will never escape justice. If you attack our citizens, you will forfeit your life.” In essence, Trump conflated an official of a country, with whom we are not at war with, with non-state actors like al-Baghdadi and Qassim al-Rimi, whom the Trump administration has recently killed.

In a lunch with television anchors the day of his speech, the President said that earlier this year war with Iran was closer than you think. But if Trump wants to avoid a war with Iran that some in his administration apparently desire but something he personally does not seem to want, he needs to reflect on history.

Students of history know that certain factions in a nation often use an unanticipated incident to get their government leaders to adopt a policy that they have been unsuccessfully advocating for some time.  For example, many leaders in Germany used the unexpected assassination of the Austria-Hungarian Archduke Franz Ferdinand and his wife in 1914 to get their leaders to start a war with France and Russia, which they believed would be over quickly, and allow Germany to dominate Europe. Similarly, many hawks in the Johnson administration used the Gulf of Tonkin incident, in which North Vietnamese ships allegedly attacked an American ship in 1964, to convince the president, who was campaigning against the war, to launch bombing attacks against North Vietnam, which they believed would quickly prevent it from conquering South Vietnam and eventually spreading Communism throughout Southeast Asia.

Both of these policies turned out to be disasters. Not only were twenty million people killed in World War I, but Germany lost significant territory. And as former Secretary of State Henry Kissinger noted, “None of the leaders that started World War I would have done so if they had known what the world would look like at the end.”  And in Vietnam, nearly 60,000 American servicemen and women were killed and we dropped more bombs than we did in World War II in the following decade, all in a vain attempt to prevent North Vietnam from conquering the country.

We have seen this type of situation play out recently in the Trump administration’s policy toward Iran. On December 27, 2019, when an Iraqi Shiite militia group, which the U.S. believes is an Iranian proxy, attacked several Iraqi military bases, they unexpectedly ended up killing an American contractor and wounding four U.S. military personnel at an Iraqi base near Kirkuk.

Many people around President Trump used this incident first to get him to respond on December 29, 2019, by attacking five facilities controlled by the Shiite militia groups in Iraq and Syria, which killed at least 25 Iraqi soldiers and wounded another 55. More significantly, when Iraqis, presumably under the influence of Iran, attacked the American embassy in Baghdad in retaliation, these advisors also convinced the president to use this incident as a justification to kill General Soleimani, the head of the Iranian Quds Force. This was something that many of these people had been advocating for several years. To demonstrate that this killing was not primarily a response to the killing and wounding of the Americans or the attack on our embassy, Trump’s team tried but could not give a coherent explanation of why it was necessary to kill Soleimani at this time. For example, some of them claimed that the assassination of the general was to prevent attacks that were imminent. But they could not say when or where.

Obviously, given the fact that Soleimani was arguably the second most powerful person in Iran and a hero to many Iranians and given the role he has played in defending their security since the Iraqi invasion of 1980, Trump and his allies should have realized that the Iranians would have to respond just as the French and British and Russians did in 1914 and the North Vietnamese did in 1964.

The Iranians responded in two ways. First, they had their Iraqi allies not only protest the American presence but got the Iraqi government to actually demand that they would no longer work with the U.S. and to push for U.S. troops to leave Iraq, thus undermining our ability to deal with the threat from ISIS. Second, they needed to take some military action against the United States.

However, recognizing that killing Americans was a redline with President Trump, the initial Iranian military response was to attack the Al Assad airbase in Iraq, which houses the largest number of Americans stationed in the country. But to minimize the chances of killing Americans the Iranians provided advance notice of the attack to the Iraqi government which in turn alerted the U.S.

As a result, no Americans were killed, something the president noted in a speech to the American people the day after the attack. However, as is usual with this president, Trump exaggerated and claimed that not only were no Americans killed but none were injured. As with many of the claims by the president, this turned out not to be true.

Within a short time after the attack, more than 100 service members were diagnosed with Traumatic Brain Injury (TBI) and many had to be evacuated to military hospitals at several bases outside Iraq. Some even had to be sent back to the U.S. However, rather than admitting he was wrong about the injuries, the president doubled down by downplaying these brain injuries actually calling them headaches.

There is no doubt that the Iranians felt that they had to respond to the death of one of their key leaders but did not want to escalate the crisis with the United States at this time. That is why they gave us advance warning of the attack. However, when firing a dozen missiles over hundreds of miles, there is no guarantee that there will be no collateral damage, which is what happened.

While the president deserves some credit for at least not responding militarily to the Al Assad airbase attacks, for example by following through on his threat, after the killing of Soleimani, to attack 52 sites in Iran, he does need to acknowledge that by dismissing the traumatic brain injuries is not only a disservice to the sacrifices of our men and women in uniform but ignores the fact that TBI is one of the signature wounds suffered by over 300,000 of our troops in the global war on terrorism. He also needs to develop a coherent long-term strategy with our allies for dealing with the threat that Iran poses to our interests in the Middle East, rather than sending conflicting messages as he did in the State of the Union or allowing the hawks in his administration to provoke a conflict with Iran. The last thing our military personnel and the country needs is another Vietnam or another unwinnable war in the Middle East.