Can Iran Overcome Its Water Bankruptcy? 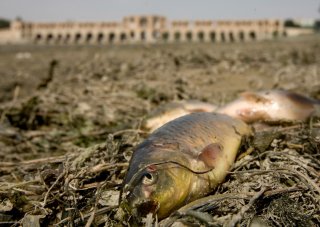 Iran has faced mass water protests due to growing water shortages in several water-scarce provinces of the country, such as Isfahan, Fars, and Khuzestan, in recent years. These protests along with other significant appearances of the tensions, such as the catastrophic shrinkage of the hypersaline endorheic Lake Urmia, have been reflected in media outlets. The important point is that the protests did not happen in an isolation from the political and managerial sectors of the country. These all are the results of a chain of processes that led to a post-water crisis stage in Iran, known as water bankruptcy. Several factors have contributed to the current state of the water bankruptcy, including but not limited to:

2. The over-grazing of rangelands and forests

3. The multiplicity of governmental stakeholders

5. The absence of effective and efficient water pricing policies

8. The absence of a proactive management paradigm

Nevertheless, the aforementioned factors are all the consequences of the existing managerial system and not the root causes. We have observed considerable environmental changes and irreversible processes to water resources in Iran, which have made some of them highly likely impossible to return to their previous conditions. These include, but are not limited to, over-exploitation of groundwater, lakes and rivers drying up, extensive deforestation, an intensive level of air pollution in metropolitan areas, drought-induced dust storms, and flooding issues. Since there have been significant changes in the state of Iran’s environment and water, a fundamental question needs to be addressed: is there an essential need to change Iran’s current managerial approach to improve adaptation and resilience in the country’s water sector?

Iran is facing water bankruptcy, where the demands placed on the system exceed the country’s available inventory of water resources; hence, the communities and stakeholders’ expectations cannot be met. Overcoming this issue will require Iran to focus on reducing water consumption by adapting to the new condition of water resources (which was intensified due to water bankruptcy) and improving resilience ahead of any significant regime changes in water systems. In contrast, the current managerial system, which is based on increasing surface water and groundwater resources, will not solve the country’s problems. Moreover, it is unlikely that an adaptive and resilient system could be developed through the current managerial system in Iran. In fact, we cannot employ the existing management system to combat the existing problems because that very system “caused” those problems in the first place.

The main driver of Iran’s water bankruptcy is the absence of necessary structural components for the sustainable management of Iran’s water resources. Due to the shortcomings in Iran’s current water governance system and in consideration of other similar cases worldwide, the following five methods of governance improvements could help mitigate the impacts of water bankruptcy and improve adaptation to the current condition of water resources:

1. Democratic allocation of water through establishment of a democratic system

4. No significant conflicts of interest between agencies within the water sector

5. A diversified and redundant economy

A democratic system reinforces the public and stakeholders’ engagement in water resources decision-making and can improve transparency through an independent judiciary. Adopting ideological governmental policies at the foreign and domestic levels—such as by emphasizing population growth, self-sufficiency in food products, and conflicts with neighbors on transboundary water resources—have shifted Iran’s policy priorities from sustainable and adaptive development to idealist and ideological goals. Therefore, adopting a non-ideological policymaking process can be considered one of the initial and essential requirements.

The third proposed governance improvement could be promoting a decentralized and polycentric administrative structure to manage competing water users based on the interests of the local stakeholders. Through such a system, water resources decisions could be made solely by local governmental and public stakeholders, local communities, professionals, and those impacted by the resources, under the extensive supervision and imposed regulations and compliances of a country-wide organization, such as the Department of Environment (DOE).

Competitions, conflicts of interests and responsibilities, and parallel decision-making between DOE, the Ministry of Energy, the Ministry of Agriculture Jihad, and some military forces (such as the Islamic Revolutionary Guard Corps, or IRGC) have created major obstacles to managing water resources in Iran. The DOE, which should be responsible for setting and reinforcing regulatory and compliance requirements, suffers from a lack of political power. Any major governance improvement for the water sector in Iran must include empowering the DOE.

Last but not least is the necessity of establishing a diversified, redundant, and non-state-controlled economy. Iran’s resource-dependent economy, which is overwhelmingly controlled by the government, has become excessively reliant on the water sector for job creation and growth. Given the current state of water bankruptcy in Iran, there is a certain need for economic redundancy and diversity in order to reduce agricultural activities’ significant water consumption and to more efficiently recharge groundwater and recover surface water.

While the Iranian authorities should be primarily blamed for Iran’s water bankruptcy, the role of climate change in intensifying the situation should not be overlooked. Iran is likely to experience more extended drought periods, greater frequency of flood events, and greater extended periods of maximum daily air temperatures over the coming decades. However, climate change should be considered as a catalyst for the current water bankruptcy in Iran and not one of the main causes.

The root causes of Iran’s water bankruptcy are not local-level mismanagement, inappropriate decision-making by authorities, international sanctions imposed on the regime, climate change, or natural climate variabilities (although these all do work to intensify the existing problems). Instead, the extent of Iran’s current water bankruptcy is the natural consequence of the existing political structure.

All said, some people may imagine that through a political, systematic transition, all of Iran’s water problems would be solved. This is absolutely not true. The aforementioned governance improvement approaches, which are solely the necessary conditions for combating Iran’s water bankruptcy, are not necessarily sufficient. Once the necessary governmental components are established, then the focus should be on the issues’ technical aspects. In other words, we know that without a significant change in the current management paradigm, many of Iran’s water problems are likely to be exacerbated; however, there is no guarantee that all of Iran’s water-related issues would be solved through a systematic transition. Iran’s water problems are both complicated and complex, with considerable legacy issues needing to be addressed over the coming decades. Hence, while such a transition would enhance the chance and probability of reducing the problems, the notion that Iran could create an effectively functioning water sector while other sectors are ineffective is delusional. It would be wrong to think that a system with such a history of crackdowns and human rights violations would prioritize the preservation of its water resources in its policymaking.

Mehdi Ketabchy is a water engineering consultant in the State of Maryland and is a researcher undertaking a Ph.D. at the University of Maryland, College Park. He has published several papers in prominent journals such as Journal of Environmental Management, Science of the Total Environment, and Sustainability, among others. Follow him on Twitter. Email: [email protected]