Can Israel Stay Democratic After Annexation? 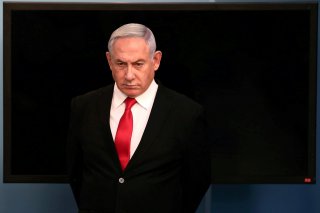 The future of a democratic Israel could be decided in the next few months as Prime Minister Benjamin Netanyahu rushes to annex large portions of the occupied West Bank. President Donald Trump’s backing of the plan is another indicator of why we need a dramatically new national security strategy, according to Jeremy Ben-Ami, president of J Street, an organization advancing pro-peace, pro-Israel policies.

“Annexation is the issue of the moment,” Ben-Ami said in an interview on the national security podcast Press The Button this week. “It's a very real policy and political debate [over] the next six weeks. The new coalition agreement is a specific green light for the Israeli government to annex after July 1 with U.S. approval. And it has that from the Trump administration.”

This is more than the approval of another settlement. It goes to the heart of what the state of Israel is and ultimately will be. “One vision is the belief that Israel needs to be as large and strong as possible,” said Ben-Ami, “That it's always going to be fighting with its neighbors and it has to win. It's a zero-sum conflict. In order to survive, you need to be as big a country and as strong a country as possible.”

“The other vision is a much more progressive and liberal vision,” he continued, “And that's that you need to find a way to get along with your neighbors and resolve these conflicts and end the bloodshed and the violence. The annexation is an effort by the right of center to win this argument and to say, ‘No, we won this territory of the West Bank over the Green Line in 1967, and we're going to keep it forever. It's ours, and we want it.’”

Annexation means that Israel cannot be both Jewish and democratic, Ben-Ami believes. “If the only political power in that area is the state of Israel, and the only people who have the rights in the state of Israel to vote and to actually control what goes on are the Jewish people, then you have a minority of Jewish people exercising political power over a majority of non-Jewish people. And that's where you're headed if you only have one state,” says Ben-Ami.

The only way to avoid that is “for the state of Israel is to have a division, a physical division in the land. So that there's a state for the Palestinian people living side by side in peace and security with the state that is the national homeland of the Jewish people.”

But the clock is ticking. “The right-wing in Israel believes they are in the midst of a historic window of opportunity; that this moment provides them with the chance to do what they've wanted to do for 50 plus years, which is to seize and take the land that they won in 1967,” cautioned Ben-Ami. “If Trump loses in November and Biden comes in in January, the United States will not give the green light and will take away that approval. So, you have a six-month window of opportunity for the right-wing to annex. Ron Dermer, who's the Israeli ambassador to Washington, is quoted as being in Senators’ offices and meeting with other Republican Party leadership, saying to them that Israel intends to annex come July 1.”

The Trump administration’s policies toward Israel showcase the dangers of a 20th century, “might-makes-right” approach. But it’s not just the destabilization of our allies that is in play. Since 2015, Trump has fed into right-wing frustrations with the internationally-backed Iran nuclear deal, castigating his predecessor for failing to squeeze every possible concession from Tehran. Two years ago, he abandoned the accord and unilaterally reimposed crippling sanctions.

The result? “We are closer to Iran having a nuclear weapon than we were right before the [Iran deal] was implemented,” said Ben-Ami. “Iran has ramped its program right back up to where it was before,” while “the chances for re-engaging diplomacy are going to be slim given the lack of trust in the United States.”

Resolving these and other challenges requires a sea-change in how the United States thinks about national security, beginning with which tools make us safer, and which do not. “When we invest money in nuclear weapons, when we invest in the military-industrial complex, when we arm ourselves to the teeth - we’re actually making ourselves less secure.”

“The types of threats that are out there to humanity are much more global and non-national in nature,” he continued, “whether it is the current coronavirus pandemic and the public health challenges, whether it relates to climate change, whether it relates to the threats posed by extranational organizations that pursue a nuclear agenda - these threats transcend any one country’s ability to deal with them.”

Ben-Ami, active in Democratic Party politics, wants the Democrats and progressives to create “an overarching message and overarching platform” that recognizes not all 21st-century threats are military in nature, something the ongoing coronavirus pandemic has made clear. “We need to increase the amount of resources we are putting into addressing the climate, into addressing public health, into ensuring the poorest in the world have an economic path forward.”

He maintained, however, that this can’t simply be a top-down effort directed by Capitol Hill alone. It will require the widespread buy-in of outside organizations. “So many different groups - whether they work on climate or public health or food or nuclear weapons, or even on Middle East peace - we can all come together under a shared umbrella with a shared set of language about how do we reshape the national security policy of the United States in the 21st century,” Ben-Ami said.  “We have to redefine what constitutes the defense budget, what constitutes a national security budget. And we need new language and we need a new messaging strategy.”

Ben-Ami acknowledged this shift will not be easy, especially given the vast financial resources behind defense lobbyists and other champions of the status quo. But, he argued, times are changing, and with them the ways people are able to bring money into play in Washington.

“The grassroots style of bringing together large numbers of people who individually don’t have the power to stand up to the large lobbies and the large organizations, but together can raise significant amounts of money and wield significant power - that’s become available in these last fifteen to twenty years.”

“That’s a game-changer,” Ben-Ami concluded. “It needs to be harnessed for this issue as well.”