A Cold Egyptian-Israeli Peace Undermines Both Culture and Security 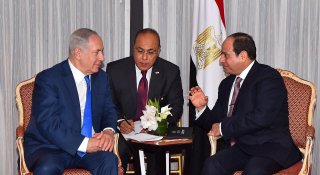 Recently, Egyptian President Abdel Fatah el-Sisi invited Israeli Prime Minister Benjamin Netanyahu to meet in Egypt for the first time in a decade to discuss their shared interests. This includes the growing threat of their political Islamist adversaries, Iran, Qatar, and Turkey. The agenda consists of improving economic ties, finding new opportunities created by Israel’s normalization with Arab Gulf nations, and exploring ways that Egypt could facilitate talks between the Palestinian Authority and Israel. What is missing is the desire to restart a people-to-people exchange to strengthen the peace accord, arguably essential for long-term regional integration and stability.

President Sisi sees the handwriting on the wall. He knows the Biden administration will be more critical of Egypt than previous ones. Sisi sees Egypt as part of a coalition of Arab states and Israel, strategizing together to mitigate the consequences of Biden’s plan to turn back towards Iran, as he rebalances American relationships in the Middle East away from the Arab Quartet (Egypt, UAE, Saudi Arabia, and Bahrain) by rejoining the Joint Comprehensive Plan of Action (Iran nuclear agreement).

American sanctions relief will inevitably be part of rejoining the nuclear deal. It will embolden Iran and be taken as a sign by its Islamist partners to challenge Egypt and its allies. Turkey wants sovereignty in the Eastern Mediterranean energy corridor, while Iran desires a Mediterranean naval base on the Syrian coast. Qatar, the political Islamists’ banker, believes it has the upper hand over the United States because it hosts America’s Central Command and U.S. Air Force Command headquarters at its al Udeid air base. How the new rapprochement between Qatar and the Gulf States will translate into any Islamist moderation or cooperation against Iran is a big unknown.

According to the American Security Council Foundation, “For ordinary Egyptians, a combination of opposition to Israel’s treatment of the Palestinians, lingering hostility from when the countries were at war and antipathy from some officials means that contact with Israelis is rare. The ties that do exist are often secret… The so-called cold peace is the result of a dual approach by Cairo in which it engages in a warm relationship at the top, but still limits social and institutional ties, in part due to fear of losing public legitimacy.”

But does this strategy of maintaining a cold peace between the peoples help long-term Egyptian security interests, especially in light of a new Middle East where political Islamism is an ascending threat?

President Sisi should consider that one possible strategy to indirectly strengthen Egypt’s relationship with America is to draw closer to America’s closest friend in the Middle East, Israel. The Biden administration and the majority of Congress will favorably view an opportunity to warm the relationship between the two American allies through economic and personal interactions.

The choice is not clear cut. Some might argue that it is in Egypt’s interest to not only preserve the treaty but to strengthen it, as political Islamists want nothing better than to undermine the accord, create distrust in the Egyptian public, and threaten Sisi’s political legitimacy. But Egypt doesn’t want Israel taking it for granted, especially as the most populous Arab nation of over one hundred million people that took the risk to sign a peace agreement.

Both Egypt and Israel know they need their peace treaty to endure. Political Islamism’s goal is to weaken that treaty and eventually take over Egypt. The treaty’s Achilles heel is the lack of human interaction between the two peoples. Although the cold peace has survived for over forty years, there is nothing inevitable about it lasting for another forty years. According to Ephraim Inbar, director of the Jerusalem Institute for Strategy and Security (JISS), the distrust is “rooted [in] cultural and religious barriers” with the Arab world viewing Israel as an “alien body.” Although Morocco’s, Bahrain’s, and the United Arab Emirates’ relationship with Israel is new, the level of interaction between their peoples has already surpassed Egyptian and Israeli exchanges over the last thirty years.

Why should this matter? Some experts will say that as long as their respective military and intelligence services’ cooperation is strong, the soft power of people-to-people interactions is of minor consequence. With the common enemy of political Islamism threatening both nations, this should be enough, and taking the risks of changing the Egyptian people’s perception of Israelis is a bridge too far to cross.

Unfortunately, as evident from the Arab uprisings of the past decade, political discontent can rise anew over time. In a world controlled by malign social media forces, Islamists have become experts not only in riling up discontented populaces but can coordinate uprisings by merely pressing a few keystrokes on a computer, instantaneously sending their rallying messages of destabilization to millions. The Brotherhood and Salafists brought the Islamist President Mohamed Morsi to Egypt’s presidency in 2012. There is no guarantee that next time the Egyptian people will be able to throw off the yoke of political Islamism as they did with the Egyptian military’s help, one year after Morsi’s rise to power.

Egypt needs stability, intelligence, economic security for its people, and military prowess to survive in a world where its rivals, Turkey, Qatar, and Iran, are looking to destabilize it. The Turkish-Qatari alliance would like a compliant and like-minded Egyptian leader like Morsi. This is not a war between Sunnis and Shiites, but a confrontation between moderate Sunni Arab states and ideological political pan-Islamists.

Real stability would need a new approach. It is crucial that Egypt’s people self-examine their beliefs about who their friends and enemies are. Today the Egyptian people still see the Jewish state more as an enemy than a friend. The memory of four wars, 1948, 1956, 1967, and 1973, still resonates strongly with them. During the Mubarak era, contrary to the state’s official stance of peace, the media, schools, and mosques at the societal level portrayed Israel as a perpetual enemy. To President Sisi’s credit, he has hesitantly begun to change this dynamic, and his invitation to Netanyahu is a good first step.

Things may be looking up for the relationship. According to a report in the Times of Israel, Israel’s new Ambassador to Egypt Amira Oron believes relations are already improving. Oron says that new possibilities for cooperation are emerging in Mediterranean energy development.

For their part, Israelis have not been able to find common ground with the Palestinian Arabs, who have the sympathy of their fellow Arabs. It doesn’t matter whose fault it is, what matters is the Egyptian people see Israel as victimizing their brethren. Arab nations making peace with Israel today had become frustrated with Palestinian intransigence, that the Palestinian Authority chose not to negotiate with Israel when it offered East Jerusalem as their capital and 100 percent of the West Bank with land swaps in 2008.

Political Islamism has weaponized the Palestinian issue. Egypt need not double down by placating their populace with more criticism of Israel but begin the complicated process of changing the way the Egyptian people view Israel. An excellent place for Egypt to start would be to offer to broker negotiations with Israel based on two states for two peoples, a Palestinian Arab state and a Jewish state, with Palestinian refugees welcomed by the Palestinian entity.

Egypt has joined moderate Arab states, Saudi Arabia, UAE, Morocco, and Bahrain, in opposing the rise of the political Islamists. Morocco cut off relations with Iran two years ago because it supported insurgents in Western Sahara, and the Gulf States fear that Iran will try to reduce them to satraps, as they have done to Lebanon. With the United States as a less reliable ally, as it turns away from the Middle East and focuses on its greatest threat, China, the moderate Arab states, and Israel will need to work together as never before.

A new Egyptian initiative that would change the messaging about Israel, as it appears in their government communications, national media, schools, and mosques, would help strengthen the treaty. If there is an end to Covid-19 travel restrictions, encouraging the Egyptian people to visit Israel and welcoming Israelis to Egypt would begin to break down barriers of suspicion. Egyptians already have business partnerships with Israelis through the QIZ arrangements that allow both to export to the United States.

Inviting more Egyptian businesses to partner in the Israeli economy in shared enterprises would be a winning proposition. This can come in baby steps and follow the path of their Emirati cousins. Reconciliation of the peoples would set an example to Palestinians to create a new playing field to resolve the conflict once there will be a younger generation of Palestinian leadership, allowing both the Israelis and Palestinians to find a compromise.

A year ago, no one predicted 50,000 Israelis would be visiting Dubai in a month’s time, and many Arabs are coming to Israel to investigate business opportunities. Thinking out of the box means recognizing that the old paradigm of scapegoating Israel undermines Egyptian national security interests. President Sisi is on the right road; now, he needs the support of like-minded moderate Arab leaders, journalists, and academics, to secure Egypt’s future.