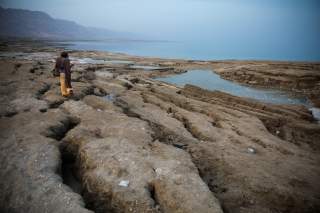 Only two decades into the twenty-first century, there have already been six conflicts with more than ten thousand casualties in the Middle East. Further threatening an embroiled region, many analysts warn that more conflict could be on the horizon: wars fought over water. In the words of UN Under Secretary General Hans van Ginkel, “conflicts over water, both international and civil wars, threaten to become a key part of the twenty-first century landscape.” Unless the looming potential for conflict can be abated, the United States and its allies will be drawn into yet another war in the Middle East.

Resource scarcities are rife and rising in conflict-prone areas like the Nile region, Iraq and Yemen. Still other countries, like Somalia and Sudan, recently experienced famine or droughts that were linked to banditry and sub-state conflict. But the region with the most worrying potential for interstate conflict over a lack of resources namely water—might be the Jordan River Basin. Not only is the basin one of the most water-deprived places per capita, but it also comprises countries with previous histories of conflict: Syria, Israel, Palestine, Lebanon, and Jordan.

Until the mid-twentieth century, water was an abundant resource in the Jordan River Basin. Irrigation and canal systems sustained water availability even as the basin’s population grew, and bilateral agreements prevented most violence. But today’s bipartite mixture of regional instability and decreasing water supplies could destabilize the détente.

Violence over water in the Jordan River Basin has previously occurred. Israeli defense minister Ariel Sharon noted that “in reality, [the Six Days War] started . . . on the day Israel decided to act against the diversion of the Jordan [River].” (The Arab League had been helping supply Syria, Jordan and Lebanon with the knowledge and resources to divert the Jordan River away from Israel.) Non-state actors in the region have also previously perpetrated water-based violence: in 1965 the Palestinian National Liberation Movement, later renamed Fatah, employed guerilla-style attacks on the National Water Carrier of Israel, an infrastructural project bringing water from the Sea of Galilee to the center and south of Israel.

Since the 1960s, a number of lesser-known conflicts and disputes took place over water. According to the Pacific Institute, which amalgamated a database on worldwide conflicts related to water, there have been ninety-two water-related incidents in the Middle East. Most of these were attributable to developmental disputes, terrorism or incidents where water was used as a military tool or target. Still, there have been fewer conflicts over water than other natural resources, such as oil, defying Egyptian diplomat and UN Secretary-General Boutros Boutros-Ghali’s 1985 prediction that “the next war in the Middle East will be fought over water, not politics.”

The current balance of power in the Jordan River Basin may be undermined by climate change-related resource-deficiencies. Advanced climate models forecast that the Levant’s water deprivation in the twenty-first century could reach catastrophic levels. According to a 2010 study by Jeannie Sowers, Avner Vengosh, and Erika Weinthal, the Levant will experience a 25 percent decrease in annual precipitation by the end of the twenty-first century. Even more eye-opening is a 2007 article by Mousa Mohsen, which reported that should current trends hold, the per capita water supply in Jordan will more than halve. Certain countries, already weakened from civil war or political instability, will be more affected than others by water shortages. Syria, for instance, is forecasted to experience crippling water scarcities in addition to its already fraught political situation; the 2007–08 Human Development Report predicted a 50 percent decline in Syrian water availability by 2025.

The state of water in the Middle East is widely known: surveys of local residents demonstrate that the majority of the population understands how rapidly water resources are being consumed. According to the 2009 Arab Forum for Environment and Development pan-Arab survey, 72 percent of respondents thought that climate change would affect the availability of drinking water in their country. And even without Hollywood films such as Quantum of Solace popularizing potential resource deprivation, there are a plethora of clear-cut examples of dropping water levels in the Jordan River Basin. The Dead Sea’s water levels, for instance, are dropping by about a meter every year due to heavy usage of the rivers that normally replenish the sea by Israel and Jordan.

Some scholars refute the narrative that a war will break out over water. Their arguments generally reflect two considerations: imports and alternative solutions. One school of thought postulates that imports of goods that are normally water-consumptive, such as food, can be substituted for local goods. This view, however, puts countries, especially those that are landlocked, at the mercy of suppliers. The second school of thought states that increases in desalination technology could provide an influx of water necessary to keep pace with demand. Desalination plants, however, add to remaining water sources’ salinity and could catalyze new problems in the local ecosystem. Furthermore, relying on uncertain technological leaps is not a strategy that countries should bet their futures on.

In the near future, desalination and damming will only go so far; water levels in the Jordan River Basin are declining and will continue to recede at precipitous rates. Given the explosive potential of a war over water in the Levant, the United States should pursue three courses of action. It should diplomatically forge new bilateral and multilateral resource-sharing agreements. It should survey and analyze food-chain logistics with regional partners. Also, it should help allies militarily secure vital water infrastructure.

First, the United States should assist in the creation of new water-sharing agreements to supplement existing treaties in lieu of the Syrian Civil War. The United States has a precedent helping navigate water issues in the Jordan River Basin: after clashes in 1953 over the Yarmouk River, President Eisenhower sent Ambassador Eric Johnson to forge a settlement. One version of the “Johnson Agreement,” which was never ratified, designated 60 percent of water consumption of the Jordan River to Lebanon, Syria and Jordan, and 40 percent to Israel. While bilateral treaties and agreements exist between some of the interested parties in the region, a comprehensive and multilateral agreement is still elusive.

Second, helping the supply of water in the Jordan River Basin meet the demand will not only alleviate some of the pressure, but will also help spur regional economic growth. In 2013, the Food and Agriculture Organization of the United Nations (FAO), in partnership with the European Bank for Reconstruction and Development, drafted an analytical brief of the food-chain logistics from a water perspective in Jordan. More data like that presented in the report, which allows countries to better target sectors to improve upon, could also help decrease the overall demand for water while also noting places for better access and importation of water.

Third, the United States should help its allies strengthen water infrastructure security. Whether from non-state actors or from state-based military strikes, water infrastructure is a high-value target. Dams could be one potential high-risk piece of infrastructure, specifically because they are crucial to a country’s welfare and are time-consuming to rebuild. Mapped data from the FAO and DIVA-GIS demonstrate just how close many of Jordan’s dams are to the shared border with Israel and the West Bank.

Another war in the Jordan River Basin would impact not just the countries therein, but also the United States. With troops already deployed to Israel, Jordan and Syria, the United States would likely take military action to support its allies. By undertaking diplomatic and military preparations now, however, the chance of such a conflict ever taking place can be decreased.