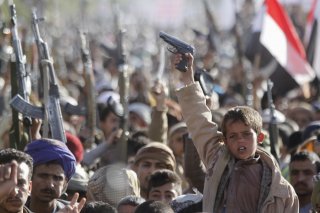 Since the February 25 airstrikes on Iranian-backed militias in Syria, lawmakers on both sides of the political spectrum are looking to curb the president’s authorizations of such attacks. But President Joe Biden was right in showing that he would not give Iran carte blanche in hopes of trying to lure them back to the negotiating table. Democrats and Republicans must realize there are no quick fixes in the Middle East. For now, curbing the president’s actions in the Middle East could endanger our ability to respond quickly to regional provocations and our ability to look at the long road ahead in the region.

While on the campaign trail, Joe Biden, now America’s forty-sixth president, was adamant about reviving the Iran nuclear deal. Yet on February 25 Biden ordered airstrikes on several Iran-backed militia targets in Syria. With the nuclear deal back at the forefront of American diplomacy, the airstrikes might have come as a surprise for some, but they were not unwarranted. Just nine days prior, in a rare move, Iranian-backed militias launched rockets at an airport in Erbil, Iraq, killing a U.S. citizen. Typically, such attacks were confined to Baghdad but such a brazen attack on coalition forces in Iraqi Kurdistan is unprecedented. Iran has always used its proxies to pressure the United States and this time was no different. Biden, most likely not wanting to carry out a strike near Erbil and embarrassing Iraqi authorities, instead retaliated in Iran’s sphere of influence in Syria.

Democrats, especially the more progressive wing, are only pushing for diplomatic solutions when dealing with Iran but the road back to the nuclear deal will be a long and arduous one. Iran is still enhancing its nuclear program and declining to return to the negotiating table since Biden made it clear that sanctions will not be lifted unilaterally. Compounding the problem is that the Iranian reformist movement seems to be on its deathbed after Donald Trump’s torpedoing of the nuclear deal caused Iranians to distrust President Hassan Rouhani’s reformist agenda. Reformist candidates for the Iranian parliament couldn’t manage to get on electoral lists, handing the country’s legislature to hardliners in last year’s legislative elections. And if an Islamic hardliner takes the presidency this year, which is looking all but certain, it will make negotiations even more difficult and drawn out.

Not to mention Iran knows it can harass American troops, despite that Biden’s strike was meant to show such actions would not go unanswered. This may become the new arena of engaging with Iran until both sides can agree on a way forward. Iran has already even retaliated against the airstrikes by hitting the green zone in Baghdad.

On the Republican side, there are conservatives who agree with Biden’s actions, but the more pro-Trump voices still want a total American withdrawal from the region. Yet simply pulling out of the region all together will not work either. Trump was more than happy to subcontract America’s presence in the Middle East to our traditional Arab allies in the Gulf and Turkey. Yet allowing Turkey and Saudi Arabia to do as they please in the Middle East and North Africa did not alleviate any troubles for America and in some ways, it has only made things worse. Saudi Arabia had ramped up its human rights violations like the brutal murder of journalist Jamal Khashoggi, not to mention its devastating war in Yemen. And Trump’s free pass to Turkey in the region has permitted Ankara to continue coordinating with Russia, buying Russian weapon systems, betraying our Kurdish allies that helped us fight the Islamic State of Iraq and Syria (ISIS), and deploying Syrian mercenaries in Libya and Azerbaijan with no consequences.

But what both sides of the political aisle need to pay attention to is the long road ahead in the Middle East. The region is in a dire situation with millions displaced and regional militias in control of large swathes of fragmented states. This upheaval is perfect cannon fodder for an organization like ISIS. Despite Trump declaring that the terrorist group has been defeated, ISIS has managed to carry out a number of attacks in Syria and Iraq. This only gives ISIS more of a chance of spreading and causing a problem for American troops and the region in the long run. Maintaining an active U.S. troop presence for the foreseeable future in Iraq and Syria will help the United States retain its advances against ISIS.

But unlike the Trump administration, which brought peace deals between states that were not even at war (i.e., Bahrain and Israel), Biden must also push for more tangible working agreements to have an impact on the ground. He must bolster initiatives like the new unity government in Libya which is seeking the removal of Russian and Turkish mercenaries from its territory, or the French initiative to stabilize Lebanon. Bringing rival sides together and reigning in mercenaries and militias will drastically relieve regional tensions.

There are positive steps Biden is already taking in the region that in the long run could bear good fruit. While maintaining pressure on Iran, Biden has also applied pressure to Tehran’s archrivals in the Gulf—namely Saudi Arabia and the UAE. The president has withdrawn U.S. support from the war in Yemen, showing that the United States will not turn a blind eye to its allies’ abuses. It remains to be seen if mitigating the situation in Yemen and reigning in Iran’s rivals will bring Tehran back to the negotiating table. Biden has also extended an olive branch to the Palestinian Authority and restored U.S. funding to the UN Relief and Works Agency (UNRWA). By taking a step back from blindly supporting the anti-Iran axis and Turkey, Biden is showing America is once again looking like a serious player in the region.

If Congress truly wants to advance America’s interests in the Middle East, it would consider a Marshall Plan of sorts to help states like Yemen, Libya, and Iraq rebuild, get people settled, and get children back in schools. Without increased aid and an active effort to help the displaced, the region could slip further into chaos.

So, for now people on both sides of the political spectrum must realize that the United States, one way or another, will continue to be involved in the Middle East for the foreseeable future. Simply quitting the region would have more negative ramifications than positive, especially in the fight against ISIS. Instead, Biden must position the United States as a positive player that is looking to stabilize fronts rather than abandon the region’s fate to militias and armies with malicious intentions.

Paul Gadalla is a former Beirut-based journalist who also worked in communications at the Carnegie Middle East Center. He has an M.A. in political science and focuses on the Eastern Mediterranean and religious minorities. He is currently based in Washington, D.C. Follow him on Twitter: @BoulosinDC.