The Coronavirus Has Led to More Authoritarianism for Turkey 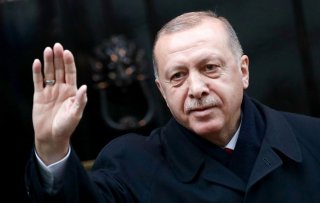 Turkey is well into its second month since the first coronavirus case was diagnosed on March 10. As of May 5, the number of reported cases has reached almost 130,000, which puts Turkey among the top eight countries grappling with the deadly disease—ahead of even China and Iran. Fortunately, so far, the Turkish death toll, at less than 2.7 percent of reported cases, has been relatively low compared to the world average of almost 7 percent. A senior expert from the World Health Organization (WHO) recently credited Turkey’s performance and expressed cautious optimism about the situation stabilizing. With reported cases and deaths falling, President Recep Tayyip Erdoğan announced on May 4 a graduated program for lifting restrictions in May and June.

Thus far, Turkey’s response has been marked by a tension between an approach based on science, represented by the minister of health, Fahrettin Koca, and a piecemeal counterpart shaped by Erdoğan’s political priorities: perpetuating his one-man rule by saving the economy and keeping his conservative religious base happy. As the country begins to open up, Erdoğan’s policies and narrative suggest that the country should expect more of the same authoritarian politics. It is doubtful that this will help to solve Turkey’s persistent economic and political problems that have been exacerbated by the pandemic.

As the virus raged on in China, many in Turkey wrongly believed that the country would not be affected by the spread of the virus. As late as mid-March the Turkish president even predicted economic gains for Turkey emerging from the crisis. Precious time was lost until the WHO officially declared a pandemic, coincidentally on the same day that Turkey’s first case was reported, and the country’s vulnerability was finally recognized. Two weeks later, the severity of the situation had still not completely dawned on the president as he speculated, in an address to the nation, that the country could emerge from the crisis within two to three weeks.

In contrast, Koca adopted a more realistic and science-based approach. He set up an advisory board composed of medical experts and scientists. He also chose to be relatively transparent by instituting daily press conferences and sharing data on the course of the infections. In sharp contrast to Erdoğan’s own approach, his softer and much less divisive communication style earned praise. This helped him to win the trust needed to convince the public to comply with the steadily expanding set of government measures ranging from social distancing and the closing down of public spaces to travel bans and, eventually, curfews. In a recent poll public, trust in Koca was reported to stand at an exceptionally high level of 75 percent. However, politically he remains unequivocally subordinate to Erdoğan and his policy priorities.

Two such priorities for the president have deeply marked the adoption and implementation of the measures to keep the virus at bay and then defeat it in Turkey. The urgent need to keep his conservative religious base happy led to hesitancy with regards to quarantining pilgrims returning from Mecca after Saudi Arabia-imposed travel bans and blocked access to holy sites due to the detection of coronavirus cases. A less than strict enforcement of the eventual quarantine led to infected individuals spreading the virus to their hometowns, particularly along the Black Sea, which then led to the imposition of Turkey’s first curfews on some of the towns. There was also equivocation regarding the closing down of mosques to communal gatherings including the Friday prayers. Hardly a week after the introduction of a ban by the Directorate of Religious Affairs there was a sole Friday prayer for a select few held at the Presidential Palace, allegedly to boost morale. Yet, the back and forth preceding this VIP-only prayer betrayed a considerable degree of confusion in the ranks of the government, which was driven by indecision over whether to follow the teachings of science or religion.

Keeping the economy running is a major concern for Erdoğan, as it has been for leaders around the world. In summer 2018, the Turkish economy entered a recession marked by negative growth rates, growing unemployment, and soaring inflation, especially in basic agricultural products just before critical local elections in March 2019. A fragile recovery could be seen by the final quarter of 2019, primarily driven by private consumption supported by monetary easing and fiscal measures. In January 2020, the minister of finance, Berat Albayrak, confidently predicted that the Turkish economy would expand 5 percent by the end of the year.

The coronavirus has dashed these hopes. Persistent problems such as a constantly weakening currency, high debt, dwindling foreign reserves, and growing unemployment threaten to destroy the Turkish economy. The International Monetary Fund warned that the economy could shrink by 5 percent and that unemployment could reach over 17 percent by the end of the year. Travel bans and the contraction in international trade is hitting Turkey’s tourism and export earnings hard, two important drivers of employment and economic growth. This picture has left Erdoğan facing a dilemma between saving lives and saving the economy.

The tension between the two became yet another source of inconsistent and piecemeal measures. His initial response to the pandemic on March 18 was marked by a striking contradiction as he called for people to stay at home and avoid travel while announcing a significant tax cut on air travel and hotel industry to spur business at the same time. The response also included an economic stimulus program of $15 billion corresponding to roughly 2 percent of Turkey’s GDP, admittedly a meager sum compared to the stimulus packages adopted by the United States and the EU. This revealed how the government was caught with very little resources of its own hence the pressure to keep the economy open.

Yet, the steady increase in the coronavirus cases intensified the calls for lockdowns. Initially, those above the age of sixty-five and subsequently those twenty years and below were ordered to stay at home. However, on both occasions the government had to revisit these hastily introduced decisions and allow those with jobs to be excluded from the restriction. This conspicuous tension between the need to prevent the spread of the virus by introducing stricter isolation measures while keeping the economy open reached a peak on April 12 with the resignation of the interior minister, Süleyman Soylu. Less than forty-eight hours earlier, Soylu had unexpectedly issued a weekend curfew under instructions from Erdoğan, precipitating a rush to supermarkets and bakeries. The resulting criticism over the failure to coordinate even with the Health Ministry and for effectively undermining significant gains in social distancing led to calls for his resignation.

To project an image of unity, Erdoğan rejected Soylu’s resignation, to the delight of his supporters who celebrated the decision in the streets of Istanbul in defiance of social distancing measures. Then, the government, in a unique practice around the world, announced curfews for thirty-one provinces solely for weekends and holidays. This decision, whose effectiveness has been questioned by the Turkish Medical Association, further underscored the tension between saving Turkish lives and saving the Turkish economy.

It Is All About Political Survival

The presidential system of government that Erdoğan instituted in 2014 and formalized in 2018 has centralized all power, eroding traditional checks and balances associated with democratic governance. As the coronavirus further aggravates Turkey’s governance and economic problems, three distinct developments are betraying Erdoğan’s efforts to continue to consolidate his one-man rule.

An important outcome of Erdoğan’s growing authoritarianism and centralization of power has been to weaken Turkey’s institutions. While Turkey’s government agencies had already been significantly weakened, the coronavirus crisis revealed how professional organizations have also suffered. For example, the Turkish Medical Union, long recognized for its professionalism and constructive criticism of government policies, was excluded from the advisory board set up by the Health Minister, denying it the possibility to shape policymaking. In 2011, the government closed Turkey’s only vaccine development and production institute despite considerable resistance and warnings. The institute was set up in 1928 and had developed a world-renowned reputation for its work. Similarly, the closure of military hospitals and their pharmaceutical factories met criticism from experts. Their closures robbed Turkey of the infrastructure, scientific knowledge and experience needed to contribute to the fight against the coronavirus and the development of a vaccine.

Secondly, the repression of criticism and opposition has persisted, if not intensified, over the recent weeks. The practice of detaining critics and opposition figures had long become a distinguishing aspect of Turkey’s presidential rule. A Turkish businessman and philanthropist, Osman Kavala, and a former opposition leader, Selahattin Demirtaş, have been in detention for years despite court rulings that say they should be released.  Since the pandemic, numerous journalists and social media users have been detained on the grounds of disseminating “provocative news,” and a doctor questioning the government’s statistics was forced to apologize for misleading the public. Ordinary individuals have not been spared. A truck driver was detained when he implicitly addressed himself to Erdoğan in a viral video recording arguing “Either I stay at home at your word and die from hunger or I die from the virus. In the end, it’s not the virus but your system that will kill me.” Repression and the silencing of criticism has inevitably led to questions concerning the accuracy of the coronavirus statistics and commentary that the picture in Turkey is much worse than presented by Koca in his daily briefs.