Coronavirus Is No Reason To Bailout Iran's Regime 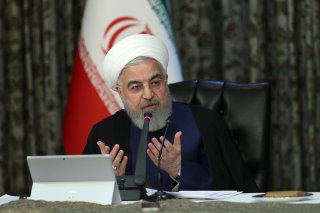 The Islamic Republic, and their lobby groups in the United States and Europe, have renewed a campaign to lift the U.S. sanctions so as to help Iranians gripped by the Coronavirus crisis. Representatives Ilhan Omar (D- MN) and Alexandria Oscario-Cortez (D-NY) have circulated a letter asking the administration to lift the sanctions.

Yet, the Islamic Republic has no trouble funding its security forces, including the Revolutionary Guards, or sending money to Hezbollah or Syria’s Bashar al-Assad. If you are against war, then you shouldn’t fund a regime that promotes war in Lebanon and Syria. The Islamic Republic has deliberately rejected medical help to exacerbate the situation in Iran. The clerical regime seeks only cash.

Tehran and their allies are engaging in a “good cop, bad cop” game with the international community. In an open letter to the American people, to commemorate the new Persian year (Nowruz, beginning March 20), President Hassan Rouhani called on American people to urge the U.S. Congress and the White House to repeal the sanctions.

Rouhani accused Washington of restricting Tehran's efforts to contain the novel coronavirus, COVID-19, that has killed more than 2,000 and infected 27,000 across the country, according to official figures. This was for the international audience—domestically, the virus is blamed on imperialist powers trying to biologically assassinate Iranians.

Joining in the propaganda war, Foreign Minister Javad Zarif claimed that Washington’s sanctions are the sole cause of hampering Tehran’s ability to fight the spread of coronavirus, making Iran more vulnerable than other countries. “

“A huge part of the danger Iranians face is due to the restrictions unjustly imposed on them by the U.S. government,” Zarif said in a video message for the New Year.

The good cop strategy has been augmented by the articles appearing in major newspapers arguing for an end to the sanctions and end the country’s isolation.

Yet, the Islamic Republic wants to be isolated because it serves its domestic and international political agenda. A regime that advocates for a revolutionary and Islamist worldview cannot be seen to accept medical help from the West.

Last Sunday, Supreme Leader Ayatollah Khamenei said he had rejected several offers of medical help from Washington because it might be tainted.

Instead of welcoming humanitarian aid, the eighty-year old leader peddled the same unfounded conspiracy theories advanced by the Chinese government during his New Year address.

He warned that the U.S. military created a virus which “is specifically built for Iran using the genetic data of Iranians which they have obtained through different means.”

Addressing the U.S. administration: “You might send people as doctors and therapists, maybe they would want to come here and see the effect of the poison they have produced in person.”

Khamenei’s views are not the rantings of a lone man. His is the most powerful voice in Iran and echoes views held by the Islamic Revolutionary Guards Corp leadership.

It’s not just American help which the Islamic Republic has rejected. Under pressure from IRGC, Tehran also rejected the offer of medical help by a team sent by the renowned international NGO, Medecins Sans Frontieres (MSF) or Doctors Without Borders.

On March 22, MSF had sent a consignment of medical aid to Iran, including one field inflatable hospital, medicines, respiratory masks, and protective clothing. But the group was told that its help was not wanted.

Tehran’s dealing with the virus beggars belief. The leadership knew about the outbreak even as it avoided doing anything to stop it—or even inform the public about it. The government has cynically used the crisis to score points against the United States.

The country’s former health minister Hassan Ghazizadeh Hashemi says he warned top officials about the dangers of novel coronavirus late December, but no one took any action.

Yet, the regime restricted access to Khamenei, even as it denied there were any problems. When he had a customary meeting with a group of religious eulogists, his security detail did not permit them to approach Khamenei and kiss his hand.

Remember, this is a leadership that has refused to shut down the religious shrines at Qom, the epicenter of the virus in Iran and has failed to quarantine major cities to slow down its spread.

Yet Tehran had no trouble ordering a massive crackdown on anti-regime protests that shut down the country at a cost of 1,500 lives, and unplugged the Internet for more than a week, but has failed to implement a quarantine.

The leadership isn’t interested in medical help, but in breaking the sanctions. After all, Tehran officials have often repeated that medicine and food are not sanctioned. The country has sent medical help to Syria and Iraq during the current crisis.

Even now, more money is going to fund religious institutions inside Iran than is being devoted to fighting the virus.

Under these circumstances, downplaying the Islamic Republic’s own colossal role in the spread of the COVID-19 in the country and shifting the blame to U.S. sanctions is tantamount to betraying Iranians. There’s no doubt that sanctions have indeed rendered life difficult for people in Iran. However, a bigger security and health problem for the entire world is that the regime doesn’t care about the health of Iranians or the world in the wake of the COVID-19 pandemic. Rather, it’s bent on its own survival at the cost of the world’s survival. It’s about the time the world realized how lobbyists of the regime attempt to tug at the heartstrings of the international community to downplay the calamities brought about by the Islamic Republic.

Of course, the West should help Iranian people with medicine and medical equipment but handing over cash to the clerics who have demonstrated they have no regard for human life—that’s a disastrous solution that no ordinary Iranian will support.