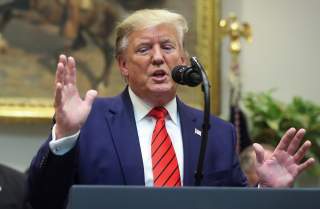 When the Trump administration began, Americans were moved by the gruesome reports of children injured and killed by chemical weapons attacks in Syria, which led the president to take decisive action to save lives. In the fight against ISIS, the Syrian Democratic Forces (SDF) became—and still are—Washington’s most reliable and effective ally. In this context, the president’s decision to withdraw from Syria is a bewildering betrayal of both America’s interests and its allies in Syria. President Donald Trump’s retreat from the Self Administration of North and East Syria (SANES) will lead to mass killing and ethnic cleansing; it will undo many of the gains made by the United States in Syria and the region to defeat ISIS.

On October 7, following a phone call with Turkish president Recep Tayyip Erdogan, Trump made the decision to withdraw U.S. forces from a stretch of Syria’s border with Turkey, eliciting a sharp response from SDF allies. The commander of the SDF, Gen. Mazloum Abdi, said that abandoning the Kurds “is hurting U.S. interests and reputation.” Even the president’s staunchest supporters rebuked the surprising move. Sen. Lindsey Graham (R-SC) noted that “this impulsive decision by the President has undone all the gains we've made, thrown the region into further chaos. Iran is licking their chops. And if I'm an ISIS fighter I've got a second lease on life.” Senate Majority Leader Mitch McConnell (R-KY) said, “American interests are best served by American leadership, not by retreat or withdrawal.” Although Congress voted in January to keep U.S. troops in Syria, the president is unilaterally unraveling years of progress.

After officially defeating the ISIS caliphate alongside U.S. troops earlier this year, the SDF is now at the mercy of Turkey. The power vacuum left by a U.S. withdrawal leaves the Kurds, along with Christians and other religious minorities, vulnerable to ethnic and religious cleansing. Human-rights violations occurred in Afrin in early 2018 when Turkey launched their second incursion into northern Syria. The capture of Afrin, which was a stable region prior to Turkey’s invasion, led to the displacement of over 140,000 people now living in makeshift camps without proper access to basic services. According to Amnesty International, Syrian groups armed by Turkey have committed serious human-rights violations against the local population such as arbitrary detention, enforced disappearances, looting, property confiscation, and torture.

Erdogan has already made clear his intention to brutally reshuffle local populations—and today Turkish forces have begun an offensive against U.S.-backed Kurdish forces. At the UN General Assembly, Erdogan said “If this safe zone can be declared, we can resettle confidently somewhere between one to two million refugees,” despite the illegality of involuntary relocation of refugees under international law. Because Afrin was in Russia’s area of influence, the United States had limited options to prevent a Turkish incursion. However, the president can control the playing field in SANES and his decision to remove U.S. troops, whether implemented now or over time, will see Edrogran repeat Turkey’s treatment of Afrin across all of northeastern Syria.

In a region characterized by strongmen politics and authoritarian capitalism, SANES created an oasis of peace and stability since the defeat of ISIS in Syria. Given the much larger size of the region in question, human-rights violations will be more widespread and severe compared to Afrin. But unlike in Afrin, the United States is in a position to act. The president’s decision to stop acting in the region is an unconscionable betrayal of American principles and the loyalty of our allies.

Sarkaw Aziz is an MBA candidate at Harvard Business School. He is a Kurdish American born in the Kurdistan Region of Iraq and has spent significant time traveling and working in the region. Due to a server error, this piece is being reposted. It appeared early last week.