Could Saudi Arabia And The UAE Throw The Election To Donald Trump? 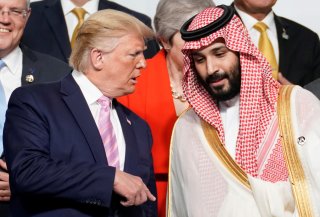 Foreign countries’ interference in U.S. politics is almost as old as the nation itself. In the election of 1796, America’s first truly competitive presidential race, the English and French attempted to intervene, with England favoring John Adams and France viewing Thomas Jefferson as more sympathetic to the ideals of the French Revolution. 224 years later, the same concerns are present; there are ominous signs that Washington’s close Arab partners might interfere in the 2020 presidential election to boost President Donald Trump’s shot at a second term.

The national media has focused heavily on Russian, Chinese, and Iranian meddling in domestic politics. It has paid rather less attention to Arab governments’—America’s “friends”—interference in its internal affairs. “America’s adversaries are engaging in an all-out assault on American democracy,” writes Ben Freeman, Director of the Center for International Policy’s Foreign Influence Transparency Initiative. “Yet it is still abundantly clear that America’s friends are also influencing American democracy in ways antithetical to American interests.”

A look at changes to America’s foreign policy after Trump entered the Oval Office in January 2017 helps to explain why a number of Arab governments—chiefly Saudi Arabia, the United Arab Emirates (UAE), Bahrain, and Egypt—worry he might lose this year’s election to former Vice President Joe Biden. As the Financial Times recently reported, “After enjoying what critics view as a free ride by Mr. Trump, the Arab states risk facing far greater scrutiny on human rights and their foreign interventions, while having a less sympathetic ear for their hawkish stances on Iran.”

To prevent this, the Saudi kingdom has made clear efforts to circulate misinformation via social media, both in Saudi Arabia and in the United States. On October 13, the Washington Post reported that the Saudi government propagated a false rumor that Mike Pompeo had released thousands of Hillary Clinton’s classified emails, and that these emails showed that the Obama administration secretly plotted to replace Mohammed bin Salman (MBS) with his deposed cousin, Mohammed bin Nayef (MBN). Washington Post columnist David Ignatius described the purpose of this deception as twofold: it gave MBS an excuse to prosecute MBN for treason, and, were Biden to win in November, it would give the Saudi government political cover to confront America on other issues without losing domestic support.

Nor is such influence confined to Saudi Arabia. In the United States, Twitter took down three separate misinformation operations run by the Saudis in 2019 and 2020, and Twitter and Facebook have also removed UAE-operated misinformation networks. Furthermore, throughout Trump’s presidency, both Riyadh and Abu Dhabi have invested more than $100 million into lobbying in Washington. Much of this lobbying has been focused on ensuring that Washington continues to support the Saudi-led coalition in its five-year war in Yemen, shielding the Saudi government from accountability for the murder of Washington Post columnist Jamal Khashoggi, attempting to tarnish Qatar’s international image, and advocating for increasingly aggressive policies against Saudi Arabia’s regional rival Iran.

Concerns about the two Gulf states’ interference in America’s political arena are not new. “Various witnesses affiliated with the Trump campaign have been questioned about their conversations with influential individuals from the UAE, Saudi Arabia, and Israel, according to people familiar with the probe,” the Daily Beast reported in December 2018. “Topics in those meetings ranged from the use of social-media manipulation to help install Trump in the White House to the overthrow of the regime in Iran.” Earlier that year, NBC put out a story explaining that “Counterintelligence investigators have been scrutinizing UAE influence in the Trump campaign since before Mueller was appointed as special counsel, and the probe has continued in coordination with Mueller's team, according to two people briefed on the investigation.

However, electoral interference from the Gulf has been largely overshadowed by interference from other nations, particularly those without the Gulf’s friendly ties to the United States. In August 2020, President Trump and other American intelligence officials confirmed that Iran and China were also trying to influence the U.S. elections, albeit to prevent a second Trump term rather than bring it about.

Although the Mueller probe never proved collusion between Russia and the Trump campaign, the FBI has continued its investigation into other attempts to influence the 2020 elections. According to Dr. Andreas Krieg, Assistant Professor at the Defense Studies Department of King's College London, the UAE “features just as prominently as Russia” in these investigations.

What is clear is that Biden and a growing number of figures within the Democratic Party have moved in an increasingly anti-Saudi direction. The former Vice President has used strong language to denounce the leadership in Riyadh, even referring to the oil-rich kingdom as a “pariah” state. The stances Biden has taken on U.S. arms sales to Saudi Arabia, and his advocacy of returning Washington to the Joint Comprehensive Plan of Action (JCPOA) nuclear deal, are deeply troubling to those in Riyadh and Abu Dhabi, who fear the implications of a Biden win in November.

As the election draws nearer, the polls have consistently favored Biden, giving Trump (and, by extension, his friends in Riyadh and Abu Dhabi) a good reason to be nervous. Between now and Election Day, the possibility of the Saudis and Emiratis helping Trump to win a second term through election interference cannot be dismissed. However, the Iranians and the Chinese will likely do the same in favor of Biden, since the former vice president’s policies will be nearer to their interests than Trump’s have been. Foreign powers’ interference in the 2016 election could be almost nothing compared to what Americans might be subjected to in the coming weeks.

Throughout the United States, there must be greater concern about cyberattacks and ransomware which could target the infrastructure necessary for running this year’s election. One of the steps that Washington could preemptively take would be to inform all foreign governments, including ostensibly “friendly” ones, that any electoral interference detected could lead to harsh diplomatic consequences.

While the Trump administration is trying to reassure the American public that it is committed to taking seriously the threat of Russian, Chinese, and Iranian election interference, there is an unsurprising lack of attention to the possibility that Saudi Arabia or the UAE might attempt the same. The American people should demand that no foreign country, regardless of its relationship with Washington or geopolitical position in the international arena, have any influence in the U.S. election this year. Unfortunately for Trump, this means having a frank discussion about possible interference from Washington’s close partners on the Arabian Peninsula, who, given Trump and Biden’s very different positions, have a clear interest in ensuring that the next four years of America’s Middle Eastern policy closely resemble the last four.

Dr. Khalid al-Jaber is the Director of MENA Center in Washington D.C. Previously, he served at al-Sharq Studies & Research Center and as Editor-in-Chief of The Peninsula, Qatar’s leading English language daily newspaper. Al-Jaber is a scholar of Arab and Gulf Studies, and his research focuses on political science, public diplomacy, international communications, and international relations. He has published scholarly works in several academic books and professional journals, including the World Press Encyclopedia, Sage, and Gazette.