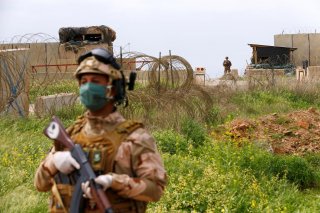 The future of the U.S. policy in Iraq is uncertain, as the American military presence there stands at the intersection of several key goals with considerable discord between them: counter-terrorism, ending “endless wars” in the Middle East, and the struggle to contain Iran.

The global outbreak of the coronavirus, Iraqi political deadlock, and the January 2020 assassination of Iranian Gen. Qassim Suleimani have now added considerable variability to what was already a volatile theater. Iranian-backed Iraqi militias, including Kataeb Hezbollah, appear to have caught the U.S. on the horns of its Iraq dilemma as they ramp up pressure on American forces based there.

One of the major predicaments in which the U.S. finds itself in Iraq relates to how it ought to respond to repeated attacks on its troops by Iran-backed factions. The initial inclination of every strategist would be to seek to instill deterrence, but those efforts would encounter formidable challenges.

In the broader strategic picture, the Pentagon’s mission of implementing an effective response is impeded by the fact that it faces persistent and highly motivated forces whereas its own Commander-in-Chief is fickle and largely risk averse.

In addition, in the Iraqi social-political context, U.S. retaliations against these groups (many of which are now integrated into the state security apparatus) elicit outrage from the government and public and they risk the expulsion of U.S. forces or destabilizing ongoing Iraqi efforts to establish a national government.

On the tactical level, given that the impact of the assassinations of Suleimani and militia leader Abd Al-Mahdi al-Muhandis remains opaque, it is unclear what type of measures might deter these groups and the degree of influence Iran retains.

One thing is for sure, though: electing not to respond to hostile activities would reduce their cost to those perpetrating them and potentially invite them to escalate further.

When these dilemmas are combined with the acceleration of the global spread of the coronavirus pandemic, the crash of oil prices, and the upcoming U.S. presidential elections, the White House may be tempted to avoid addressing them and instead withdraw American troops from its second-longest running war in the Middle East.

However, U.S. withdrawal from Iraq would have significant consequences that could prove such a step to be short-sighted. It would damage efforts to contain Iran by further empowering the latter in Baghdad, allowing for a spillover of its influence into the Gulf region and broadcasting a message to Teheran that the United States is in retreat.

This is not to say that filling the vacuum left by the U.S. would be exclusively beneficial for Tehran, as it may find that its more prominent role drags it deeper into a state plagued by profound instability and provokes local resistance—an Iranian “Pottery Barn” moment, but one which Iran’s Quds Force appears reasonably prepared to handle.

The recent shipment of missile defense systems to Iraq to defend U.S. troops and the consolidation of American forces in that theater can help to reduce the pressure imposed by Shia militias, but it will not resolve the root causes of the U.S. challenges.

The U.S. is in desperate need of a strategic program, including well-defined political and military goals as well as prepared, calculated, and coherent responses to expected actions by adversaries and partners; without that, the U.S. will have no choice but to continue acting on an ad hoc basis.

Not only does the current improvised U.S. approach create greater likelihood of miscalculation between the U.S. and Iran and hinder Washington’s ability to move toward a long-term strategic vision of what it seeks to achieve, but the “unpredictability” of U.S. policy has also caused partners to question America’s reliability while apparently failing to instill the “madman” deterrence in America’s adversaries.

Eldad Shavit is a senior researcher at the Institute for National Security Studies (INSS) in Israel and previously served in senior roles in Israeli Defense Intelligence and the Prime Minister’s Office.

Ari Heistein is Chief of Staff to the Director and a Research Fellow at the INSS.

Image: An Iraqi soldier wears a protective face mask and gloves, following the outbreak of coronavirus disease (COVID-19), as he stands guard during the hand over of Qayyarah Airfield West from US-led coalition forces to Iraqi Security Forces, in the south of Mosul, Iraq March 26, 2020. REUTERS/Thaier Al-Sudani