Damaged By Drone Strike: Suleimani's Sainthood Is Now Being Questioned 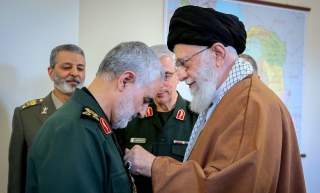 In the wake of Washington’s assassination of former Quds Force commander Maj. Gen. Qassim Suleimani, Arab Shi’a desires and interests across the Middle East are under a microscope. Have they shifted their protest slogans from opposing Iran to denouncing the United States?

Americans should not assume that wide-angle television images of Shi’a protests in Iran calling for the downfall of the Great Satan reflect Shi’a sentiment across Arab societies. In Yemen, Suleiman’s death has sparked euphoria in the South, even though Houthi militia leaders reportedly arrested detractors who were challenging Tehran’s party line of Suleimani’s sainthood. In Lebanon, the Shi’a in the southern suburbs of Beirut are in mourning while other Shi’a are celebrating. In Syria’s Idlib province, the site of the killing fields orchestrated by Suleimani, people distributed sweets to celebrate his demise.

Even in Iraq, the site of the United States’ assassination and its glaring breach of Iraqi sovereignty, Shi’a leaders are exercising caution in their responses to mixed expressions on the Arab street. Videos were posted online of Iraqi celebrations after the assassination. And Shi’a-led protestors returned to Baghdad’s Tahrir Square in opposition to the Shi’a-led Iraqi government. Suleiman’s death has not caused a change of heart among those Shi’a protestors who have been on the streets since October—even though they are often confused with those who are Iranian-backed and who stormed the U.S. embassy grounds inside the Green Zone.  Their desire is focused on Iraqi nationalism and a determination to get all foreign forces out of their country.

This is all to say that Shi’a politics has become defused and complicated. Now, more than ever, it is important to distinguish the loyalties among Arab Shi’a communities from those of the chest-beating Shi’a protestors on the streets of Tehran who support the Islamic Revolutionary Guards and the principles of the 1979 Islamic revolution.  It is also important to change the frame through which some Americans view Arab societies: It is no longer a matter of winning over Arabs who might be duped into becoming Iranian-style loyalists if this is the objective. The protests in recent years, particularly those in Iraq and Lebanon over the last several months, are about self-determination and may not necessarily be pro-American or anti-Iran.  In Baghdad, the same protestors who were the targets of Suleimani’s hit squads—the militias which killed hundreds of demonstrators—are back on the streets. They may be celebrating his death, but that does not mean they agree with the methods the United States used to carry it out.

Populist Iraqi Shi’a cleric Moqtada al-Sadr is a perfect example of the complexities of Shi’a politics. Responding to an Iraqi parliamentary resolution to force all foreign troops to leave the country, Sadr declared that it did not go far enough and was a “weak response, insufficient against American violation of Iraqi sovereignty. ”

Yet, while Sadr, who is a master at assessing the pulse of the street, rarely misses a photo opportunity with Iran’s Supreme Leader Ayatollah Ali Khamenei, he too keeps a polite distance from Tehran when it comes to his own constituency in neighboring Iraq.  For years, he has advocated for the expulsion of all foreign forces from Iraq and has vehemently renewed this demand over the last two weeks.

Iran would like the world to believe that the assassination of Suleimani has united all Shi’a against the United States and the West. For Khamenei, Suleimani was not just a warrior, he embodied the essence of Iran’s Revolution. He rose from the ranks of the downtrodden (peasant family) whom the founder of the Islamic Republic, Ayatollah Ruhollah Khomeini, vowed to raise from the Shah’s ashes. He confronted threats at home and in the region. He trained Iraqi Shi’a militias and made them staunch Iranian loyalists. Under his direction, hundreds, if not thousands, of Americans died. Because Khamenei had made him larger than life, he has tried to convince the world of his popularity. “Enemies felt humbled by the magnificence of the Iranian nation’s turnout for the funeral of Martyr Soleimani,” Khamenei tweeted on Jan. 8.

Putting aside the military escalation between the United States and Iran and the future risks as a result of Suleimani’s death, the fragmentation among the Shi’a has come to light in ways Iran never expected.

This has been happening for at least five years, as Arab Shi’a have made known their discontent with Iran’s theocracy and their desire to go their own way. For years, Ayatollah Ali al-Sistani of Iraq, who holds perhaps more sway than Khamenei for the Shi’a, has condemned Iranian behavior in the Middle East. In recent months, Sistani specifically called Iran out for the brutality against peaceful Iraqi demonstrators who were targeted to die at the hands of the Iraqi Shi’a militias under Suleimani’s command. Thousands of Iraqis have been killed since the protests began on October 1, 2019.

So while the pundits might use the threat of war between the United States and Iran as another blunder from President Donald Trump and a windfall for Iran, this analysis is short-sighted. Iran’s brand is thinning among the Shi’a and Suleimani’s departure creates breathing room for the Shi’a in the region.

Geneive Abdo is the author of four books on the Middle East, including, The New Sectarianism: The Arab Uprisings and the Rebirth of the Shi’a—Sunni Divide (Oxford University Press, 2017).