The Dark Side of Turkey's Intelligence Community 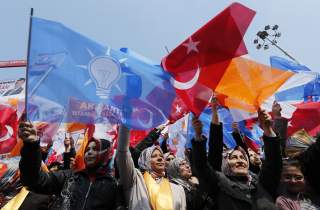 Last week the U.S. Embassy in Turkey released a statement that said Washington had reached an agreement to implement “initial measures to address Turkey’s security concerns” and to establish a “peace corridor” inside Kurdish-controlled portions of Syria. The agreement aims to diffuse a crisis which saw the Turkish military mobilize along the Syrian border and threaten to occupy northern Syria, ostensibly to fight terrorism. The details of the agreement have not been made public.

Turkish officials have long complained that the U.S. partnership with Syrian Kurds is a betrayal of decades of U.S.-Turkey partnership. The People’s Protection Units (YPG) and associated militias, Turkish diplomats argue, are affiliated with the Kurdistan Worker’s Party (PKK), a U.S.-designated terror group. Turkish authorities have repeatedly told their American counterparts that “you can’t fight one terrorist group with another.”

It is true that there are links between the PKK and YPG, though the two are not interchangeable. It is also true that the PKK is a U.S.-designated terrorist group, but Turkish authorities are dead wrong to suggest equivalency between the YPG in Syria and the Islamic State. Indeed, the Turkish insistence is ironic given that the United States only began partnering with the YPG when evidence became overwhelming that Turkey’s political leadership—including President Recep Tayyip Erdoğan’s own family—and intelligence services actively supported and profited from the Islamic State and other Al Qaeda-affiliated groups in Syria.

The problems with Turkish arguments are multifold. First, there is no evidence that the YPG or PKK plot or direct terror operations from Syria. This accusation was the stated reason behind Turkey’s launch in January 2018 of Operation Olive Branch but, twenty months later, it is clear the operation was more about ethnically cleansing the region’s Kurdish population than eradicating terrorism. Underlying both Turkish bad faith has been Turkey’s willingness to welcome several dozen Islamic State fighters into Turkey’s own militias now operating in Afrin. Most American officials—as well as a growing array of European and Arab diplomats—understand that Turkey misuses the terrorism label as a political weapon against opponents.

Spurious Turkish accusations against the YPG are only the tip of the iceberg. Erdoğan has accused rival politicians both from the predominantly Kurdish People’s Democratic Party (HDP) and the center-left Republican People’s Party (CHP) of supporting terrorism, imprisoning many. He has also accused the followers of his one-time ally, Pennsylvania-based cleric Fethullah Gülen, of being terrorists, imprisoning tens of thousands while somehow ignoring his own role in Gülen’s empowerment. Yet, the thousands of documents he turned over to U.S. authorities to win their support for Gülen’s extradition provided no proof; the U.S. Justice Department concluded documents Turkey provided were often deeply flawed if not fraudulent. Alas, such poor intelligence has become the rule rather than the exception under the Erdoğan regime. In the years leading up to the abortive July 2016 coup, Erdoğan presided over multiple purges of political opponents based upon evidence which even Turkish courts later deemed fraudulent. After I first criticized corruption and financial opacity in Turkey fifteen years ago and then, drawing upon a wide range of sources and contacts, successfully predicted a coup, Erdoğan deemed that I, too, was a terrorist and a business ally issued a bounty for my capture.

Consider the PKK: The U.S. State Department designated the group in 1997, against the backdrop of Clinton administration efforts to finalize a large arms sale to Turkey. As Aliza Marcus shows in her seminal history of the PKK, Blood and Belief, while the PKK engaged in violence and perhaps terrorism in the early years of its campaign, its insurgency had matured by the late 1990s. Turkish president Turgut Özal was even planning serious negotiations with the group prior to his fatal 1993 heart attack. Twenty years on, it is not clear whether such terror designation fits the PKK. Indeed, earlier this year, a Belgian court ruled that the PKK and its civil society affiliates are not a terrorist organization. That ruling marks the latest in a string of Turkish losses when European courts examine the evidence behind the PKK’s terrorist label. This is not to say there has not been Kurdish terrorism perpetrated against Turkey—the Kurdistan Freedom Falcons (TAK) has launched attacks inside Turkey, but there is no evidence these were organized in either Syria or the PKK stronghold on Qandil mountain in Iraq, or that the PKK and TAK are interchangeable, any more than other terrorist spoilers seeking to undercut reconciliation over the years.

Within the U.S. context, the question is not only whether there is any evidence independent of Turkish government sources to back claims that the PKK is a terrorist organization, but also whether leading Kurdish officials are criminals. Consider, for example, the case of Adem Uzun, an executive council member of the Kurdistan National Congress (KCK) and a leading Kurdish intellectual and political activist, whose 2012 arrest in Paris sparked the Belgian lawsuit, which ultimately overturned the PKK terror designation. In 2011, at a time when President Barack Obama still considered Erdoğan to be one of his “most trusted” foreign friends, the U.S. Treasury Department named Uzun and several colleagues as “Specially Designated Narcotics Trafficking Kingpins.” The Erdoğan government celebrated. But, while such designation paralyzes any ability for U.S. officials to discuss, debate, or interact with leading Kurdish activists, there is no indication that the information supporting the designation provided to the United States by Turkey is based on reality.

Simply put, Turkey and its National Intelligence Organization (MIT) appear to abuse the intelligence and diplomatic process by seeking to insert flawed and false intelligence in order to constrain and subvert U.S. diplomatic options. Rather than blindly accept Turkey’s accusations against the YPG, PKK, and top Kurdish intellectuals and activists, it is time the United States intelligence community audit every piece of intelligence that Turkey has provided over the past several decades to ensure that U.S. intelligence remains apolitical and uncorrupt and that Turkey does not abuse intelligence cooperation to interfere in U.S. diplomacy and policy formations. Perhaps such an audit will find that the conclusions now embraced by the Central Intelligence Agency and State Department are warranted. More likely, however, given the exposure of recent Turkish dossiers as fraudulent, it will become clear that a major reassessment is warranted in Washington. Either way, as the Trump administration and its Special Envoy on Syria James Jeffrey make life-and-death decisions that could impact the region for decades, no official should put the diplomatic nicety of taking Turkey at its word above a fundamental quest for truth.