The Death of Turkey's Business Climate 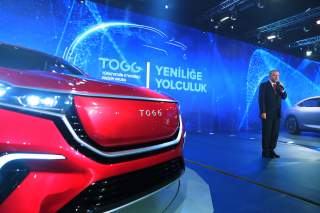 Human rights, democracy, and good neighborly relations create a favorable climate for doing business. When it comes to Turkey, the canary in the coal mine is nearly dead. Investors should be wary.

Volkswagen recently delayed plans to invest $1.4 billion in an assembly plant in Turkey. Existing facilities, where VW produces commercial vehicles for its MAN subsidiary, may also be on the chopping block.

VW invoked corporate social responsibility to justify its decision to suspend the assembly plant. VW was reacting to Turkey’s unprovoked cross-border attack against the Syrian Democratic Forces (SDF), allies of the global coalition against the Islamic State. Since invading northern Syria on October 9, Turkish forces and their Islamist mercenaries have killed up to seven hundred SDF members and displaced three hundred thousand people.

The Turkish and German economies are closely connected; Germany is a major market for Turkish goods. Turkey’s economy would suffer serious consequences if VW’s action has a knock-off effect, discouraging other businesses to invest.

The VW decision comes at an uncertain moment for Turkey’s economy. Macroeconomic stability is wobbly and Turkish banks have high foreign indebtedness levels. The Turkish Lira was trading at 1.5 to the U.S. dollar when Erdogan’s Justice and Development Party (AKP) came to power in 2003. Today’s exchange rate is 5.5 Lira to the dollar. While a weaker Lira boosts exports, it has a dramatic impact on the cost of supplies needed for manufacturing. Turkey’s manufacturing sector is heavily reliant on imported inputs, which are now much more expensive.

Concerns about the banking sector were exacerbated when the Southern District of New York convicted the state-owned Halkbank of money laundering in a scheme to circumvent US sanctions on Iran. The U.S. prosecutor called Halkbank a “fugitive” when it failed to appear in court in the criminal case last month. Sanctions will prevent other banks from doing business with Halkbank and could lead to a run on hard currency. Foreign Direct Investment (FDI) has the potential to staunch financial hemorrhaging but FDI requires investor confidence. Erdogan blames “Jewish” bankers for Turkey’s currency and credit crisis.

Turkey’s disdain for the rule of law not only discourages FDI. It also contributes to conflict and injustice in society.

The dismal state of democracy in Turkey is marked by rigged elections and the arbitrary arrest of oppositionists. Kurdish political leaders have been prosecuted on bogus “terrorism” charges. Article 140 of the penal code, which makes it a crime to denigrate “Turkishness” is used to suppress dissent and silence critics. The results of recent local elections in Kurdish-majority regions were suspended and local mayors were replaced by government-appointed “trustees.”

Erdogan turned Turkey into a giant gulag after the so-called coup in 2016. About fifty thousand people face politically motivated charges and more than one hundred thousand civil servants were dismissed. Turkey has imprisoned more journalists than any other country.

Turkey is turning to International Financial Institutions to remedy its woes. However, Turkey’s invasion and atrocities in northern Syria have alienated the international community.

In response to Turkey’s criminal conduct in Syria, the House of Representatives recently passed a sanctions bill overwhelmingly by 403 to 16. Turkey may also be subject to additional sanctions through the “Countering America's Adversaries through Sanctions Act” (CAATSA), which should kick in after Turkey activates the S-400 missiles it bought from Russia for $3 billion.

Turkey is facing a perfect storm brought on by its ineffective governance, social discontent, and regional conflict. Investors should be wary. The political risk is too high and returns too modest. If current trends continue, then banks and businesses will be running for the exits. VW’s withdrawal is a warning about the risk of doing business in Turkey.

David L. Phillips is director of the Program on Peace-building and Rights at Columbia University’s Institute for the Study of Human Rights. He worked on U.S.-Turkey relations as a senior adviser and foreign affairs expert at the State Department during the Bush administration. His recent book is The Great Betrayal: How America Abandoned the Kurds and Lost the Middle East.