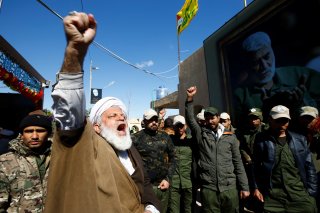 The United States is ramping up its efforts to counter Iranian-backed militias in Iraq like Kata’ib Hezbollah and Asa'ib Ahl al-Haq. Critics of U.S. military action in the Middle East suggest that such an escalation could bring the United States into more direct conflict with Iran. Tehran is not yet backing down in the face of U.S. pressure. It is also true, however, that allowing Iran and Iranian-backed proxies to attack American forces and diplomatic property with impunity is more likely to lead to war and severely erodes not only U.S. military and diplomatic morale but also American influence in the world. It is simply not realistic for the United States to withdraw from the region, however, for the forces of altruism will not fill the vacuum. The Obama administration found this out the hard way when they pulled U.S. forces out of Iraq in 2011, only to have to return U.S. forces three years later into a more active fight. Nor is it wise to play whack-a-mole with Iranian-backed proxies in Iraq if the goal is to strengthen Iraq rather than condemn it to Somalia-like failure.

The military problems posed by Iranian-backed militias are large; certain militias are like cancers in Iraqi society, slowly eating away Iraqi sovereignty. The U.S. strategy has been undercut by more basic problems, however:

First, the lack of an effective influence operation strategy has allowed groups like Kata’ib Hezbollah and Asa’ib Ahl al-Haq to paint themselves as Iraqi patriots when they are anything but: Taking commands from foreign military officials such as the late Qassem Soleimani or his successor Qods Force Commander Esmail Ghaani (who arrived in Baghdad on April 1 to liaise with his militia contacts) undercuts any argument that they are motivated by Iraqi interests.

Second, the U.S. tendency to paint all Shi’ite militias as the same undercut the ability to stigmatize and de-legitimize groups like Kata’ib Hezbollah.

Within Iraq, the Shi’ite militias all seek the cloak of legitimacy provided by Grand Ayatollah Ali Sistani’s 2014 call to fight the Islamic State. Many Shi’ites answered his call and walked away from their jobs and families in order to defend all Iraqis, not only fellow Shi’ites but also Sunnis and Christians, from the viciousness of the Islamic State. They sacrificed themselves in huge numbers but won a great victory. Kurds may say they were crucial to the fight, but generally just handled perimeter defense in their own region. It was the Hashd al-Shaabi (Popular Mobilization Forces) that liberated Fallujah and Ramadi, Samarra, Tikrit, Beiji, and most of Mosul.

Until the United States and its Iraqi allies, however, differentiate between the two groups and push back on any attempt by the Iranian-backed groups to claim legitimacy bestowed by Sistani upon others, they will be able to depict themselves as Iraqi patriots rather than what they really are: Iranian proxies.

Here’s the point for U.S. policymakers: To target groups like the Badr Corps, Kata’ib Hezbollah, and Asa’ib Ahl al-Haq without first delegitimizing them allows these groups to depict themselves as martyrs and the United States as an enemy of Iraq. This enables recruitment and causes retrenchment. If, however, U.S. officials treat with honor the groups which emerged from Sistani’s 2014 fatwa but repeatedly label those birthed by Iran’s Islamic Revolutionary Guard Corps more than a decade before as interlopers, it can delegitimize the Iranian-backed groups in Iraqi eyes. Only when this differentiation is achieved, will Iraqis broadly join in and accept the dissolution or destruction of the Iranian-backed Shi’ite militias.