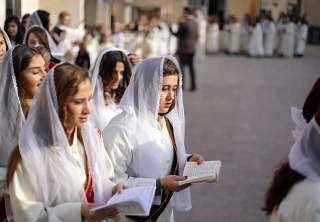 Early this week, a possible breakthrough emerged in the decades-long conflict involving Turkey, Syria, and the Kurds. For the first time in eight years, the imprisoned leader of the PKK, Abdullah Ocalan, was allowed to meet with his lawyers. Ocalan issued a statement calling for “deep social reconciliation” and for a peaceful resolution to the conflict in both Turkey and Syria. The PKK should heed the advice of their imprisoned leader and declare a unilateral ceasefire to their operations inside Turkey. In return, Turkey should call off their planned intervention in Syria.

While the timing may be a coincidence, the prison visit and statement coincided with Ambassador Jeffrey’s visit to Ankara. The United States should use their leverage to bring both sides back to the negotiating table. It is a historic opportunity that should not be missed.

Ankara’s security concerns can be addressed without deploying Turkish troops and without occupying more Syrian land. Additional observation posts along the border or unarmed drones would suffice to monitor the border and ensure there are no incursions from either side. Furthermore, monitoring the border from the air with unarmed drones would be more effective than monitoring the area through the use of troops. Eyes in the sky can see farther than human eyes on the ground. If Ankara genuinely wants to collect useful intelligence—and not simply occupy territory—they should prefer the use of drones over deploying troops.

The decades-long conflict between Turkey and the Kurds can be solved on both sides of the Turkish and Syrian border. But this requires thinker bigger, not smaller. It requires recognizing that other groups—especially Syriac and Assyrian Christians—have also been persecuted and now reject the deployment of Turkish troops in their region.

In the far northeastern corner of Syria, I met with members of the Syriac Military Council (MFS) in one of their bases near Derik, about ten kilometers away from the Turkish border. From their base one could easily see the snow-covered Judi mountain in Turkey. Several of the young men had crosses or the word Jesus tattooed on their arms or neck. Kino Gabriel was a founding member of the Syriac Military Council back in 2013 and is now the official spokesperson for the SDF. While he appreciates the training, they have received from the U.S.-led Coalition, he feels that they are not receiving enough material support, as most of the heavy weaponry went to places like Raqqa and Deir Ezzour where major military operations took place against the Islamic State.

Mr. Gabriel did not ruminate about past atrocities but was thinking ahead. “If Turkey attacks, what will we defend ourselves with?”

Amy Austin Holmes is an Associate Professor at the American University in Cairo, a Visiting Scholar at Harvard, and a Fellow at the Woodrow Wilson Center in Washington DC. She is the author of Social Unrest and American Military Bases in Turkey and Germany since 1945, published by Cambridge University Press.