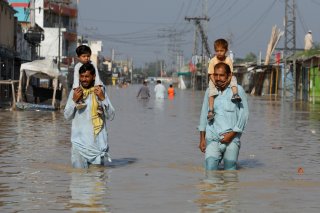 Pakistani planning minister Ahsan Iqbal claimed on Monday that the country’s devastating floods, which have so far killed more than 1,100 people and left tens of millions homeless, had caused at least $10 billion in immediate economic damage—an astronomical bill for the country, which has remained at the brink of a debt default throughout the past year.

Iqbal claimed in an interview with Reuters that the damage—caused by historically harsh monsoon rains, which carried away much of the country’s aging infrastructure and agricultural output—was “going to be huge” and that the final cost of the disaster could not be predicted with the government’s still-limited information.

“So far, [our] very preliminary estimate is that it is … higher than $10 billion,” Iqbal said. The planning minister added that the floods were far worse than Pakistan’s disastrous 2010 monsoon season, which ultimately took the lives of more than 2,000 people. He also noted that the damage to the country’s agricultural sector would lead to serious food shortages throughout the fall and winter. To address this crisis, Pakistan is expected to import food from its neighbor and regional arch-rival, India, according to Pakistani finance minister Miftah Ismail.

Although Pakistan regularly experiences flooding during its monsoon seasons, the scale of the flooding has been unprecedented in its modern history. Pakistani climate minister Sherry Rehman claimed on Monday that one-third of the country was underwater, a figure that she emphasized had “exceeded every boundary, every norm we’ve seen in the past … We’ve never seen anything like this.”

The flooding in Pakistan has compounded the country’s pre-existing political and economic problems. In the week prior to the worst of the flooding, former Prime Minister Imran Khan was charged with violating the country’s anti-terrorism law after he gave a speech that Pakistani authorities argued had threatened a judge.

The country has also grappled with a multifaceted economic crisis, including double-digit inflation and a severe shortage of foreign currency. Prior to the floods, the Pakistani government had been negotiating a bailout with the International Monetary Fund; on Monday, the organization’s Executive Board approved its proposal, granting Islamabad $1.1 billion in special drawing rights. IMF deputy managing director Antoinette Sayeh noted that the country’s economy had been “buffeted by adverse external conditions,” including the war in Ukraine, although her statement made no mention of the floods.