Does the Taliban's Endorsement of Donald Trump for President Mean Anything? 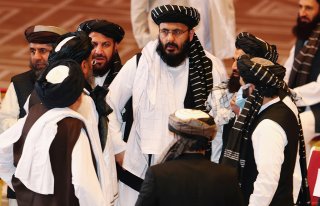 The globalization of American elections has broken new ground (again). On October 11, CBS News announced that the Taliban had endorsed Donald Trump for the presidency. An unnamed senior Taliban official made the announcement, telling CBS, “We hope he will win the election.”

It is worth recalling a similar incident sixteen years ago. On October 29, 2004, Osama bin Laden released a video message from a cave along the Afghanistan-Pakistan border. The message, one of many that the Al Qaeda leader periodically put out, showed bin Laden criticizing the foreign policy of then-President George W. Bush and ordering America to leave Muslim nations or risk another “Manhattan” attack.

The purpose of these exercises, besides rallying bin Laden’s faithful, was to confirm to the world that the elusive leader was still alive and to prove that he was still physically and mentally fit. However, the October 2004 message might have also had another purpose: it was released four days before America’s 2004 election, in which Bush was polling evenly with his challenger, John Kerry, who was a Democratic senator from Massachusetts at that time. Bin Laden’s video, in which he threatened the Bush administration, was widely perceived as an implicit warning not to vote for Bush. If anything, the warning had the opposite effect; after the video was released, Bush opened a lead in the polls that he maintained until Election Day. What bin Laden’s intentions were will never be known, but it seems plausible, at least, that the video was intended as an “October surprise” to help the Bush campaign, which would then, in Al Qaeda’s view, commit America to further involvement in the Middle Eastern quagmire and hasten its own destruction.

If the 2004 election was a tragedy for the Democrats, then the 2020 election has been a farce. If bin Laden’s statement was a carefully crafted plot, then the Taliban statement seems to have been a spontaneous, off-the-cuff remark by an official who did not fully understand the subtleties of the American news cycle. In fact, soon afterwards, the group’s spokesman tried to backpedal his message by saying in a different interview that the Taliban did not endorse Donald Trump. Well, it’s too late. “We hope he will win the election” is hard to construe as anything other than a political endorsement. Not long after, the Trump campaign rejected the Taliban’s support.

It is unclear what the value of this endorsement will be. Conspiracy theories aside, the rank and file of the Taliban cannot vote (not even by mail). Nor is it likely that the group has large numbers of swayable adherents in the United States. Even if the whole affair had been a calculated ploy to hurt Trump’s chances, it does not seem to have had that effect; the polls largely ignored the incident.

It might seem curious that Donald Trump, a president who initially campaigned on banning Muslims from entering the United States, has elicited the support of the Taliban, a hardline Islamist group that has fought an insurgency against the United States for the past nineteen years (and, moreover, vigorously enforces social-distancing guidelines). Yet the truth is that the Taliban and Trump, though certainly enemies, share overlap in their objectives. Though the forty-fifth president increased the U.S. troop presence in Afghanistan in August 2017, he has made clear his intention to end America’s two-decade war and eventually leave the country altogether. To this end, he has steadily scaled-down U.S. troop presence since 2017 and opened negotiations with the Taliban in Qatar. In February 2020, these negotiations produced an agreement establishing a fourteen-month timetable for U.S. withdrawal.

Though this withdrawal is conditional upon the Taliban following its commitments—commitments to which the group’s adherence has been, at best, dubious—the U.S. has upheld its end of the bargain and steadily lowered troop levels. Secretary of Defense Mark Esper originally projected that five thousand soldiers would remain in Afghanistan by November. However, the withdrawal was moved forward by the president on October 7, when he tweeted, “We should have the small remaining number of our BRAVE Men and Women serving in Afghanistan home by Christmas!” By all accounts, this announcement blindsided Trump’s generals, who swiftly contradicted it, but the statement was warmly received by the Taliban’s leaders and preceded their quasi-endorsement.

Trump’s case for ending the war in Afghanistan is strong. America has now been involved in the Central Asian country for over nineteen years; the youngest soldiers deployed there had not yet been born when the Twin Towers were attacked on 9/11. If America could plausibly claim it was making progress, then the case for staying would be stronger, but Washington has remarkably little to show for the human lives and capital it has spent on the war; after nineteen years, the Taliban is still strong and the government of Ashraf Ghani is still broadly corrupt. Under these circumstances, Trump’s desire to throw up his hands in frustration and leave as quickly as possible is understandable.

Interestingly, Osama bin Laden’s actions, as well as the Islamic State of Iraq and the Levant’s atrocities in Iraq and Syria, were calibrated to evoke precisely the opposite reaction. The leaders of the Islamic State hoped that, through well-publicized savagery, the terror group could draw in American forces—bait that the Obama and Trump administrations steadfastly refused to bite. Fundamentally, however, the Taliban’s motives are very different from those of bin Laden and the Islamic State. The Taliban’s goal is not to destroy the United States but to rule Afghanistan. For that to happen, the United States needs to leave—and Trump, who wants the United States to leave, represents the group’s path of least resistance.

Whether or not the Taliban would achieve the same result with Joe Biden is unclear. Were the former vice president to win in November, then he might leave a residual U.S. presence behind, as the United States has done in Syria and Iraq. Such a decision might not be popular because it would prolong the war but it would prevent the Taliban from winning an outright victory, provide an incentive for them to follow their political commitments, and do much to impede the vestiges of the Islamic State, which maintains a small but active presence in Afghanistan. For these reasons, the U.S. military establishment has avoided confirming Trump’s dictate. In an interview with NPR, Chairman of the Joint Chiefs of Staff Mark Milley avoided endorsing the president’s timetable, stating instead that the military was rigorously evaluating its options in consultation with the president.

If the Taliban heard this message (it is unknown if their leaders listen to NPR), they were probably not pleased. However, two weeks later, most Americans have already forgotten about the “endorsement”; it is one more strange footnote of 2020, and far from the strangest.