Don’t Take Peace Between Egypt and Israel for Granted 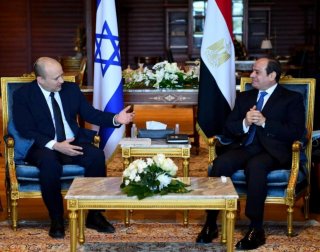 On Sept. 13, 2021, Israeli prime minister Naftali Bennett met with Egyptian president Abdel Fattah El-Sisi in Sharm El-Sheikh in the Sinai Peninsula. The event was the first public invitation for an Israeli premier to meet on Egyptian soil in a decade. And coming less than a month before the fortieth anniversary of the Oct. 6, 1981, assassination of Egyptian president Anwar Sadat, it also offers an opportunity to take stock of Israeli-Egyptian relations, past, present, and future.

At the dawn of Israel’s 1948 recreation, Egypt was the Jewish state’s foremost opponent. During Israel’s War of Independence, it was Cairo that supplied the bulk of the enemy forces. And it was Egypt, the preeminent Arab power of the day, that most concerned many Israeli leaders.

Indeed, Egypt had played an important role in opposing Zionism in the years leading up to Israel’s 1948 War of Independence. The Arab League itself was announced following a meeting between seven Arab nations in Alexandria in the fall of 1944, with a pact being signed on March 22, 1945, in Cairo. And Abd al-Rahman ‘Azzam, an Egyptian, was announced as the league’s first secretary-general. By December 1945, the league had announced an economic boycott of the Jewish community in British-ruled Mandate Palestine.

Israel’s victory over Egypt in 1948 didn’t dissuade Cairo’s leaders from future aggression. Instead, the country’s defeat led to the toppling of King Farouk I and the rise of Gamal Abdel Nasser. As a young colonel during the war, Nasser’s memoirs noted the “bewilderment and incompetence” that “characterized our high command.” Egypt’s poor battlefield performance, and the apparent “spirit of indifference” among the ruling monarchy helped Nasser and the Free Officers Movement topple Farouk in 1952.

The Egyptian strongman, however, remained focused on attacking the fledgling Jewish state. Egypt, like other Arab states, refused to recognize Israel and merely signed an armistice. But Cairo continued its war, training and arming fedayeen (“one who sacrifices himself”) to carry out cross-border terrorist attacks.

An Egyptian military captain named Mustafa Hafez organized the fedayeen. Hafez and Salah Mustafa, the Egyptian military attaché in Amman, recruited and trained no fewer than six hundred fedayeen, who bombed train tracks, blew up water pipes and roads, committed arson, and murdered as many as one thousand Israeli civilians between 1951 and 1955. And, as Michael Doran noted in his 2016 book Ike’s Gamble: they “were not so much forming a new terror network as resuscitating an old one—the network of the Palestinian nationalist leader Haj Amin al-Husseini, the mufti of Jerusalem, who at that time was living in exile in Cairo.”

“The proxy squads,” the journalist Ronen Bergman wrote in his book on Israeli intelligence, Rise and Kill First, “were considered a huge success.” Israel Defense Forces (IDF) attempted to carry out retaliation raids but, as Bergman noted, they “repeatedly failed,” and “by the middle of the 1950s, Hafez was winning.” Accordingly, in June 1953, Israeli prime minister David Ben-Gurion pushed for the establishment of a commando unit, called Unit 101, to carry out operations and establish deterrence. Meanwhile, Israeli military intelligence operatives successfully targeted Hafez and Mustafa with mail bombs. Terrorist incursions into Israel were dramatically reduced.

Nonetheless, Egypt remained Israel’s primary adversary. Home to many Nazi war criminals and Third Reich scientists, Cairo worked assiduously to develop missiles capable of hitting Israel and, eschewing outreach from the United States and others, Egypt began to receive arms and support from the Soviet Union and its satellites. The Middle East had been transformed into a Cold War battlefield, with Israel and Egypt as the stand-ins.

The growing tensions, and Nasser’s July 1956 decision to nationalize the Suez Canal, prompted Israel to collude with the United Kingdom and France to attack Egypt. Israel’s military campaign was a success—aided in no small part by two monumental intelligence coups. At the war’s opening, Israel managed to shoot down a plane carrying much of the Egyptian General Staff.

And after successfully occupying the Sinai Peninsula, Israeli intelligence found a building in Gaza City that contained the “intact card file of all the Palestinian terrorists that Hafez and his men had deployed against Israel in the five years preceding the Sinai campaign,” a veritable hit list, as Bergman noted. Militarily, Nasser had suffered a tremendous blow.

But in a move that he would later come to regret, Dwight D. Eisenhower forced the British, French, and Israelis to withdraw, handing Nasser a major propaganda victory against the West.

Yet, as declassified CIA documents show, Egypt continued to work against Israel and U.S. allies in the region. One revelation, in particular, stands out and is missing from historical accounts.

A CIA timeline of the activities of Amin al-Husseini, the founding father of Palestinian nationalism, noted that Husseini and “Egyptian Minister Anwar Sadat planned [an] assassination attempt King Saud [of Saudi Arabia] in mid April [19]57.” A “Palestinian assassination expert” with the last name of Shahin “received a bomb in Jidda, passed it to A’bdallah Faysal,” a “member of the Saudi royal family, who placed it in the King’s bedroom.” The plan, however, was discovered, but “hushed up” because of Faysal’s involvement. The document also notes that Husseini was involved in an aborted plot to plant a bomb at the U.S. consulate in Jerusalem on August 8, 1957.

Husseini’s involvement, and the plot itself, isn’t surprising.

The post-Suez Crisis Middle East experienced increased instability. The U.S.-backed Hashemites in Iraq were overthrown in a bloody coup in 1958 and the United States felt obliged to send troops to Lebanon that same year. King Saud bin Abdulaziz al Saud of Saudi Arabia would cancel a June 1957 trip to Jordan as he was “deeply impressed by recent signs of Egyptian and Palestinian conspiracy against” the two Arab monarchies, according to a June 4, 1957, CIA bulletin. Another Aug. 6, 1957 agency report noted that Nasser planned to assassinate Jordan’s King Hussein and Lebanon’s President Camile Chamoun and a “similar attempt against Saud is having ‘organization difficulties,’ but Nasser hopes for a ‘successful conclusion’ within the next six months.”

And, perhaps not coincidentally, Saud plotted and failed, to assassinate Nasser in 1958, leading to his relinquishing the throne.

Although he had previously, and successfully, solicited Saud for money for his anti-Israel activities, Husseini was seeking to “form a new government of Palestine and Gaza,” which the Egyptian ambassador supported but Saud “w[ould] not accept.” In April 1957, a declassified CIA cable notes, a “Palestinian who is said to have participated in the assassination of Jordan’s King Abdullah in 1951” was caught in Riyadh with a “cache of weapons and explosives.”

As Robert Kaplan noted in The Arabists, Sadat was a fan of Zane Grey novellas set in the American West, but he was, nonetheless, reared on anti-Western nationalism. As a young military officer, he was a member of the fascist Green Shirt movement in Egypt and during World War II he provided Nazi General Erwin Rommel with intelligence on then British-controlled Egypt.

Nasser himself would continue to make war against the Jewish state—and to use the Palestinian issue as a cudgel. It was Nasser’s Egypt that established the Palestine Liberation Organization (PLO) in 1964. Egypt’s sound defeat in the 1967 Six-Day War repudiated Nasserism, but the Egyptian strongman himself was unbowed. In the years before his death in 1970 at the age of fifty-two, Nasser promoted Yasser Arafat’s takeover of the PLO, negotiated the 1969 Cairo Agreement that established Lebanon as a base for the PLO, and launched the so-called War of Attrition.

It would be up to his successor, Sadat, to change course. Sadat sent signals—many of which were initially missed—that he sought to move from the Soviet camp to that of the United States. Egypt’s strong performance in the 1973 Yom Kippur War had, in Sadat’s mind, redeemed earlier losses. And Sadat knew that a rapprochement with the United States required a change in posture toward Israel.

Sadat would, along with Israeli premier Menachem Begin, win the Nobel Peace Prize for signing the Camp David Accords in 1978 and recognizing Israel. The move shattered the united Arab front against Israel, but it also led to Egypt’s ten-year-long suspension from the Arab League and, forty years ago this October, Sadat’s murder by Islamist terrorists.

The cold peace between the two nations has held, withstanding Sadat’s assassination, as well as the fall of his successor Hosni Mubarak in 2011 and the brief rule of the Muslim Brotherhood. But, as the Middle East analyst Simone Ledeen recently noted, it is not to be taken for granted. History tells us that she’s right.

Sean Durns is a Senior Research Analyst for CAMERA, the Washington D.C.-based Committee for Accuracy in Middle East Reporting and Analysis.