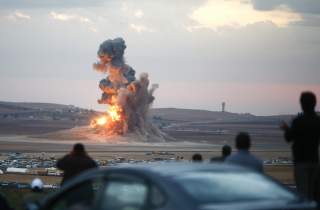 U.S. policy on Syria has been on a roller coaster ride in October. It’s unclear what will come next because current options vary from withdrawing from part of Syria to leaving all of eastern Syria to increasing troop levels in areas where oil fields are located. President Donald Trump consults only a small team on Syrian issues and U.S. policy remains compartmentalized between the Pentagon and State Department. One thing is clear from the White House, the United States now wants to secure the oil.

The same day that Trump announced that a U.S. raid killed ISIS leader Abu Bakr al-Baghdadi, the president also responded to questions about his tweets that indicated the United States would secure oil fields in Syria. He said that the oil was “so valuable for many reasons, it fueled ISIS, it helps the Kurds, and . . . it can help us because we should be able to take some also.” Trump said he might work with an American oil company to develop the infrastructure. For now, the United States is “protecting” the oil. “That doesn’t mean we don’t make a deal at some point,” he said.

The “making a deal” portion of the statement is classic Trump and is the kind of policy that has come to underpin this administration, which tends to view foreign policy as transactional. This includes the U.S. policy on “maximum pressure” on Iran which has eschewed military action in favor of economic sanctions. The Trump administration does not want a war with Iran, despite commentary that portrayed his White House as hawkish. The departure of National Security Advisor John Bolton in September reduced chances of conflict with Iran. It was Bolton, with Secretary of State Mike Pompeo, that ramped up rhetoric in May. But Iran’s alleged attacks on oil tankers, shooting down a U.S. drone, and involvement in an attack on Saudi oil facilities, showed that Tehran had called Washington’s bluff. Bolton’s “unrelenting force” threats have dried up.

We now know that Trump may have been open to a meeting with Iran’s President Hassan Rouhani in September and he only torpedoed a Taliban meeting and Afghanistan deal at the last minute. Taken together, it shows that the White House is open to creative dealmaking, even if the record illustrates that Trump’s instincts have not always panned out. For instance, North Korea has not de-escalated tensions, but Trump could be open to a third meeting with North Korean leader Kim Jong-un.

This matters for Syria. The stated U.S. goals in Syria are three-fold: Support a UN-led process on a political solution to the Syrian civil war, the defeat of ISIS and Al Qaeda affiliates, and the “removal of all-Iranian-led forces and proxies from Syria.” U.S. Syria envoy James Jeffrey reiterated these goals at an October 22 hearing in the Senate. He also said he was not consulted on Trump’s October 6 decision to withdraw troops. This means that the White House sees these goals as flexible. Trump has said that ISIS was defeated several times, as early as December 2018. ISIS leader Abu Bakr al-Baghdadi was killed in a U.S. raid on October 27. Although the U.S.-led anti-ISIS coalition, which has around eighty partners, is still fighting ISIS in Iraq, the terrorist organization has been weakened greatly since 2017. Trump paints the ISIS war as an “endless war” he inherited. He also is not focused on the UN-led Geneva talks about political solutions to the Syrian conflict. The U.S. support for UN discussions have origins in John Kerry’s policies from 2015.

What remains of the U.S. role in Syria, therefore, is not the anti-Assad campaign or the ISIS war. The Iran angle is still important because of the maximum pressure strategy and because the White House might see the oil fields in eastern Syria as leverage for making a deal with Iran. That may seem like a far-fetched idea, but Iran has been relatively silent on the continuing U.S. role in Syria. Iran’s media, which usually focuses on the U.S. role in the Middle East. has been quieter in recent weeks about Trump’s Syria policy. Iran seems to hope that the United States will leave and that there is no reason to provoke Washington while it is withdrawing. But Trump’s oil statements have reversed all of that. U.S. troops are returning and bringing their equipment with them. The withdrawal will include mechanized units and armored vehicles typically used to deter various threats, including a possible raid by the Syrian regime and its Russian ally. The oil fields near Deir Ezzor and the Conoco gas field facility have been targeted by the Syrian regime and Russian contractors in the past. The United States and Syrian Democratic Forces liberated these areas from ISIS in September 2017. The United States established a base near the Omar oil field.

Holding the oil fields creates a triangle of U.S. influence in an area along the Euphrates River stretching to the Iraqi border. The location is directly across from where Iran is allegedly building a large base at Albukamal next to a strategic border crossing with Iraq. That crossing was reopened at the end of September. Airstrikes, attributed to Israel, have targeted these areas in the past eighteen months. This is because Iranian-backed militias, such as Kataib Hezbollah, have a presence near the crossing and Iran is believed to transfer weapons via this area. Iran has been seeking to move precision guidance to Hezbollah for use in its rocket arsenal. In addition, Hezbollah has sent drone teams into Syria near the Golan. Israel targeted a Hezbollah drone unit in August and in September an Iranian-linked group tried to fire a rocket at Israel. Iranian-backed groups have tried to strike at Israel from Syria in February and May 2018 and January 2019. Now, tensions are rising. In the wake of the October 6 Syria withdrawal decision, Secretary of State Mike Pompeo flew to Israel and assured Israel that the United States supports its “right” to act against Iran in Syria. At the same time, Trump’s decisions about Syria seems to imply that he intends to keep U.S. forces at al-Tanf, a small desert base near the Jordanian border that is possibly important to interdicting Iran’s role in Syria. Israel has reportedly asked the United States to keep forces there.

The picture that emerges is that U.S. policy in Syria has narrowed down and decreased its goals but that the strategic corridor the United States sits across could be used to bargain with Russia, the Syrian regime and Iran. How could such a deal actually work? Could Trump get a summit with Russian president Vladimir Putin, on the model of the Turkey-Russia-Iran Astana process that has helped sort out and end to the Syrian conflict? Russia and Turkey met on October 22 to discuss Turkey’s demand to continue its operation against the U.S.-backed Syrian Democratic Forces. Since the United States withdrew the SDF has been working with both the United States and the Syrian regime and Russia. The SDF doesn’t want Turkey’s operations to continue. Those operations have already prompted 200,000 Kurds to flee. The United States is in a unique position now since its local partner is working with Russia and the Syrian regime, that a back channel with Russia, Iran and the regime potentially exists. The United States already conducts de-confliction with Russia over airspace in Syria. This was essential to the Baghdadi raid.

Trump’s goal could be two-fold: A deal with Russia on Syria, and pressure on Iran to reduce forces in exchange for the area of the oil fields being given back to the Syrian government. Officially Russia and the Syrian regime view the U.S. presence in Syria as unacceptable and would argue the United States taking oil from Syria is illegal. Officially the Syria regime and Russia view Turkey’s role the same way, but they have become amenable to it. Russia has worked with Turkey on the S-400 air defense deal and also on the TurkStream pipeline. Russia understands that conflicts and economics and territory are interlinked.  It has played this role in Ukraine’s Donbass and in Georgia.

The White House would like to salvage something from Syria. Trump’s statements on the country’s oil now obligate him to get something from his investment prior to walking away. That could be just a token gesture by Russia or Iran, where the White House can say it got something in exchange for its efforts. Iran will not want to hand the Trump administration a deal because it is looking at the 2020 elections and knows most of Trump’s opponents support a return to the JCPOA. Russia, however, may be more circumspect about what is coming in 2020 and prefer to work with Trump. Russia has a key role to play with the Syrian regime and Russia and Israel frequently discuss Syria. Israel hosted a trilateral meeting with Russia and U.S. national security teams in June. Russia has not condemned Israeli airstrikes on Iranian elements in Syria, except when those airstrikes have led to Russian casualties as one did in September 2018. An Israel-Hezbollah conflict that includes airstrikes on Iranian-backed elements in Syria could destabilize Syria and Moscow does not want that. In this context, Moscow might be open to some inventive “deal” with the Trump administration over Syria. For that to happen, however, the U.S. administration likely has to delegate more responsibilities outside the very small circle that Trump currently works with on Syria policy, or it means tasking someone in the inner circle with an increased focus on a Syrian deal. With Bolton out of the picture, that’s in the cards if the administration isn’t too distracted by domestic politics and investigations regarding Ukraine. On the other hand, a deal over Syria’s oil could be just what the White House wants to get out of the cloud cast by congressional impeachment investigations.