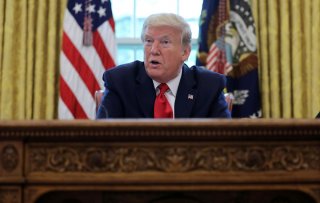 As the U.S. President Donald Trump withdrew from the Iran nuclear deal in 2018, the death knell of the reformism movement in Iran was heard. President Hassan Rouhani and reformists in Tehran started to see themselves as weakened and undermined, while hardliners were having a party over the precious gift delivered to them by White House. For Washington, the JCPOA was like a worthless piece of paper, but for Rouhani and reformists, it was vigorous political capital to use to bring up positive democratic changes. As the result of the United States abandoning the deal and reimposing sanctions, Iran’s economy started to shrink and stumble, while the rial began a freefall, continuing to this date. The debilitated Rouhani and reformists not only surrendered to the empowered hardliners, but also sided with them on various issues including ignoring the people’s right to protest. For the reformists’ base and the Iranian people, the dire condition of the economy could be tolerated if there was still hope in their hearts for change.

While controlling two branches of power since 2016, reformers couldn’t bring any substantial change in the country. Both the president and the reformist-dominated parliament gave up their promises including ending the house arrest of 2009 opposition leaders, preventing more political arrests, freedom for the press, limiting the military commanders to the barracks, and stopping them from having a strong presence in politics. Consequently, the reformists' base has now lost hope in both their leaders and senior decisionmakers as they failed and could not be committed to the reformism cause, including improving the statue of democracy in Iran. Meanwhile, many Iranians advocating reform have decided to boycott the 2021 presidential election as they did in 2020 parliamentary election. A decision stemming from reformist decisionmakers’ inability to fulfill the promises they made to their supporters in the 2016 and 2017 elections. Beside losing their social capital, the reformists are divided over what policy they should pursue as one group in favor of fundamental changes. They can either stick to the reformist base’s demands or stay in power by siding with hardliners and ignoring the reformist movement’s most basic requests, freedom of speech.

Following the 2009 disputed election which led to a crackdown on reformists that put two opposition candidates under house arrest, hardliners were freed from the nightmare that reformers’ actual goal was to turn the current theocracy into a secular state. The reformism movement, however, was revived in 2013 as its popular leaders threw their weight fully behind Rouhani in the presidential race. Despite fierce hardline opposition, he inked a nuclear deal in 2015 with the P5+1 and his foreign minister, Javad Zarif, broke the taboo by holding face-to-face negotiations with his American counterpart, creating the hope that Tehran-Washington tensions and sanctions were finally coming to an end.

This all prompted more optimism and produced a landslide victory for the reformists in the 2016 parliamentary election. Facing a threat to their very existence, hardliners launched repeated attacks, causing Rouhani and parliamentary reformists to cave in and not remain loyal to their fans. In the meantime, people witnessed some reformists’ involvement in a number of corruption scandals, causing more frustration in the base. The disregard for promises reformed reached its peak after Trump became a savior for the hardliners by exiting the nuclear deal in 2018. This not only harmed the credibility of Iran’s reformers, but emboldened hardliners to rebuke the people who voted for Rouhani and his policy of engaging the West.

Furthermore, two massive protests which rattled Iran in the past two years have tarnished the image of reformists. The underlying causes bringing people to the streets to express their concerns were the unbearable economic conditions and surging prices. A series of protests that reformists believed were instigated by hardliners to discredit Rouhani, but had spun out of control, reached most of the cities in the country. After all, both demonstrations in 2018 and 2020 were suppressed by security forces. While the reformists’ base was in favor of protesters’ demands, Rouhani and senior reformists not only didn’t support the people, but also condemned the protests. More importantly, Mohammad Khatami, the leader of reformists, took a vague position, calling some of the protesters “destructing waves” while urging the Islamic Republic to accept the people’s right to demonstrate. He also assured the establishment of his loyalty and asked for unity and change in the country. This was a turning point for the reformists’ base, spurring them to seek a new leader.

As the leader of reformists for the past twenty-three years, Khatami is known to be a popular cleric with democratic views. However, he is now the target of many harsh criticisms over his “disappointing” reaction to the 2020 protests. Prior to this issue, reformists’ failures in parliament and in Rouhani, Khatami’s mismanagement of the reformism camp, and his lack of bravery to publicly defy the hardliners had heightened the criticisms against him. Since the death of Akbar Hashemi Rafsanjani, an influential leader of both reformists and moderates who acted like a bridge between the establishment and reformists, Khatami has been striving to fill his void. Yet thus far he has failed to do so as he is not trustworthy in the eyes of Islamic Republic establishment decisionmakers, let alone permitting him to be the bridge. Worst of all, Khatami lost the trust of many of his supporters, while attempting to approach the establishment.

The reformist camp is now facing upheaval and disagreement, with some groups and figures opting for a moderate approach, consisting of siding with hardliners on some areas, as they think leaving the scene would only worsen the status of reformism and democracy in Iran. In the eyes of the reformists’ base, this group is viewed as disloyal concessionists who are taking advantage of Khatami’s “cautious” approach towards the establishment and hardliners as it serves their goal to remain in power.

The majority, however, think differently. Most of the reformists’ base and fans’ demands are becoming radicalized while expecting serious support for social movements and firm reform-minded positions taken by their leaders. It was also this majority who didn’t take part in the 2020 election, setting the lowest record of turnout in the history of the Islamic Republic. And they won't come back to the polls unless the prospect of positive democratic happenings appear. For this group, Mir-Hossein Mousavi, the 2009 presidential candidate who is under house arrest, is their preferred top and ultimate leader. In reaction to the 2020 protests, Mousavi released an unprecedented statement, condemning the Islamic Republic establishment’s crackdown, while warning the establishment of consequences of “violent and bloody” suppression of people.

In spite of being under house arrest for over ten years, Mousavi has proved to be a defiant and resistant leader in the face of hardliners' pressures to reverse his pledges. In the 2009 disputed election, Mousavi assured reformists and his fans to remain committed and never surrender to the hardliners' requests for accepting the 2009 race’s results. Since then, he has been offered freedom in return for his “repentance” of his actions and speeches against the 2009 election and victory of hardline President Mahmoud Ahmadinejad.

The irony is that Mousavi and reformism current are loathed simultaneously by radicals in Tehran, monarchists and regime change activists in US as they see them as a serious threat to their plans and goals. A sentiment which means the reformism movement is not dead.

This growing division, if lasting, will lead to the formation of a weak minority of “moderate” reformists inside the establishment, and an out-of-power majority of reformists who support social movements and are publicly popular, and look at Mousavi as their leader. However, disagreements between the two groups will undermine their unity and ability to bring about democratic changes to the country, while simultaneously helping the hardliners' consolidation and domination over the Islamic Republic. The trajectory of events is leading to an election boycott in 2021 and the victory of an anti-U.S. hardline president. Nevertheless, if U.S. presidential candidate Joe Biden wins the U.S. election and returns to the JCPOA swiftly, that will create a limited glimmer of hope in people to vote for a pro-Western candidate, prompting a possible unity between the aforementioned two reformist groups ahead of Iran’s presidential election. However, this will be very difficult as Iranians have vehemently lost trust and believe that at least for now, reformists aren't able and aren't allowed to bring up positive changes in the country.

Rohollah Faghihi is an Iran affairs analyst and is a contributor to Foreign Policy, the Economist, American Conservative, Al-Monitor and Middle East Eye.